New Year’s is right around the corner. Here is what to do and what to watch this holiday weekend 2022!

As you may already know, Oshōgatsu お正月 (New Year’s) in Japan is somewhat the equivalent of Christmas in the West, meaning it’s the time of year when nearly everyone takes time off work to spend time at home with their families, eating good food and doing goro-goro (the art of relaxing to the max). This New Year’s, whether you are solo or with friends, try your hand at some traditional Japanese games. And, as you brush up on your skills, join the nation in watching toshi koshi bangumi 年越し番組, this year’s New Year’s programs.

If you are familiar with Japanese culture, or if you have experienced a Japanese New Year’s celebration before, you will recognize the fancy wooden paddles called hagoita. Hagoita these days are solely for decoration, but historically they were used for a game called hanetsuki asobi 羽付遊び. This game has been around since the Muromachi Period, when–according to literature from that time period–it was the pastime of court ladies and lords. These hagoita are wooden paddles with square corners, usually adorned with beautiful flower motifs and a lady’s face. (You may also see hagoita of many shapes and sizes hanging at the entrance of local businesses. These hagoita are bought at the famous Tora no Ichi market in Asakusa during November, and are believed to bring economic prosperity). This New Year’s, revive the historic sport, or make a decorative one as a DIY project! 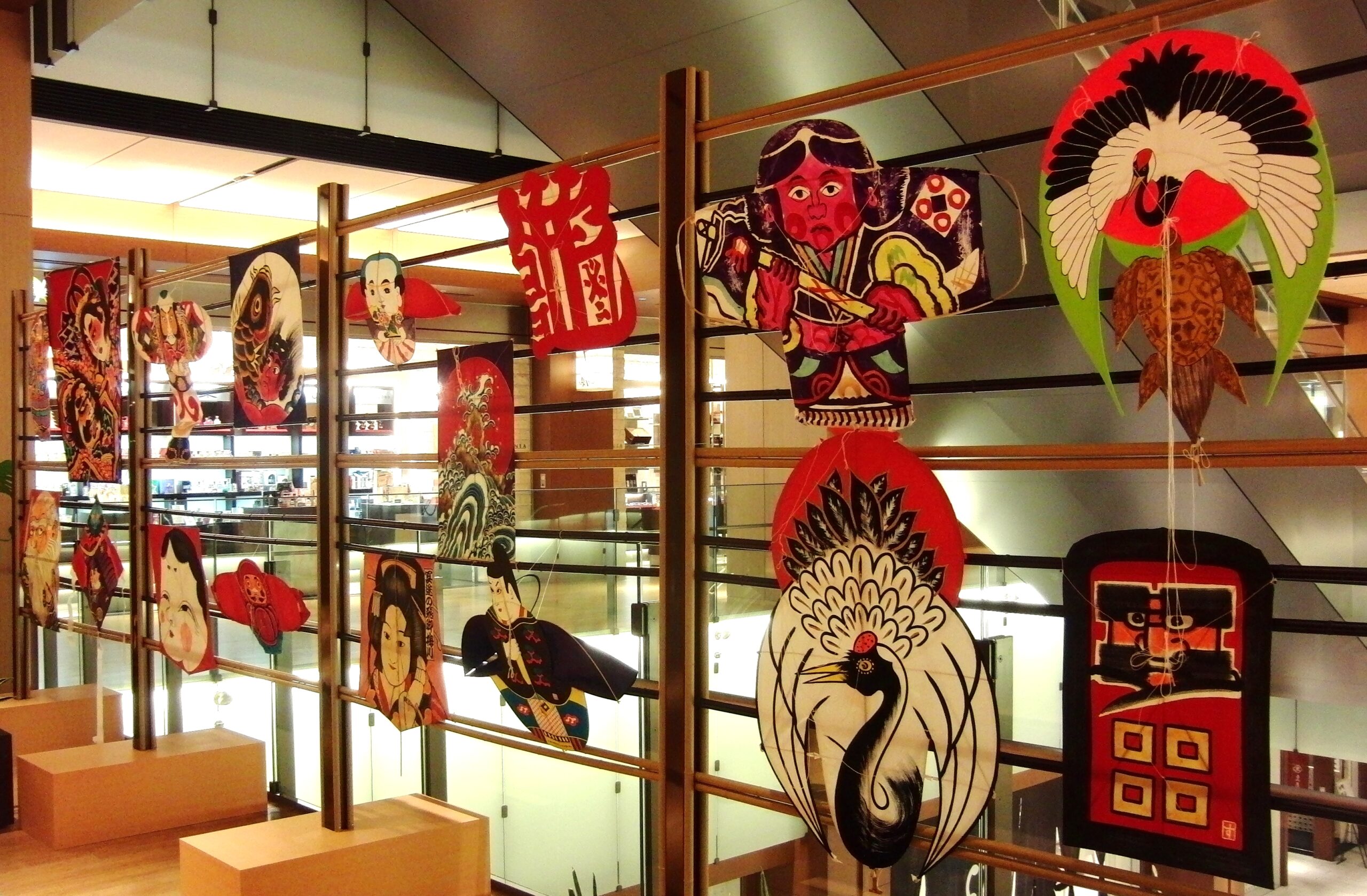 Takoage 凧揚げ is another classic New Year’s activity. Tako means “kite” and age means “to fly.” These days you can find affordable kites for sale anywhere toys are sold, or you can make your own out of a plastic grocery bag, two plastic straws, and a piece of string. For any of you foodies out there, you will notice the word tako is the same as the words for “octopus.” (Think sudako–octopus prepared with vinegar–or takoyaki–deep fried, breaded octopus) What do octopi have to do with kites? As it so happens, the diamond shape of traditional kites originally reminded people of squids, but during the Edo Period, the flying of kites was banned for safety reasons. Undeterred by the new law, people simply changed the name from squid to octopus, and continued flying their kites.

It is said that looking up at a cloudless sky on the first day of spring will bring you good health. By association, drawing your eyes upwards around New Year’s by flying a kite is also considered to be a good way to start of a brand new year. 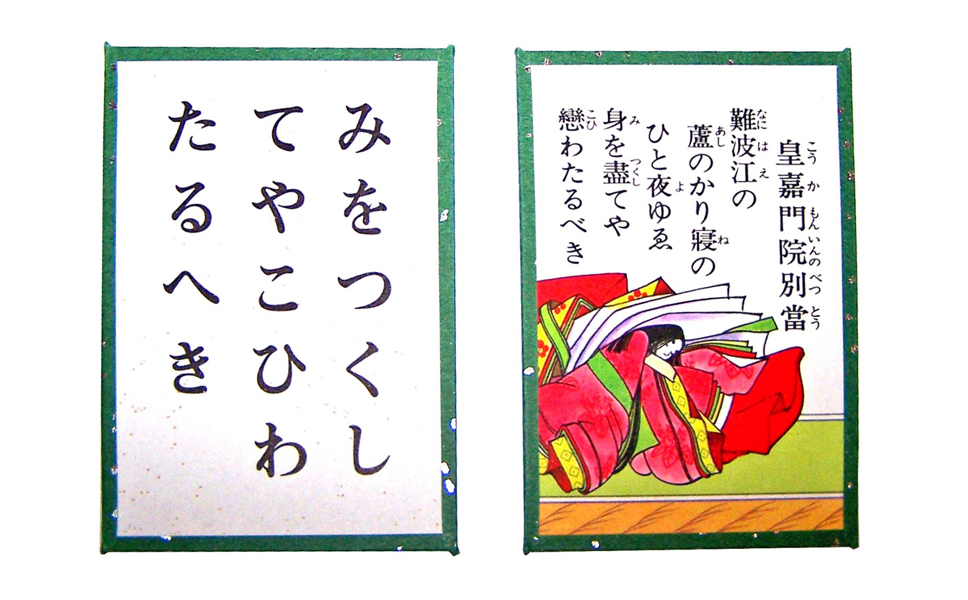 Karuta カルタ is the card game that is still popular and played by children, sometimes with fierce competition. The name comes from the Portuguese word “carta,” meaning “card,” and is played by two players facing each other, cards spread out on the floor between them. Hyakunin Isshū 百人一首 is the most popular variety of karuta. With Hyakunin Isshū, waka poems by 100 different poets are printed on the cards. The first half of one of these poems is called out, and players compete to snatch the card with the corresponding second half. Obviously, you have to know the poems completely by heart to have a chance at winning, so karuta is both fun and educational.

These days, you can buy karuta of all kinds, including character-themed karuta, anime-themed karuta, Bible karuta, and if you don’t read kanji or have never read Japanese poetry before but want to learn, there is even English-Japanese bilingual karuta!

Fukuwarai 福笑い is a game for young children similar to our Western pin-the-tail-on-the-donkey. A paper cutout in the shape of a person’s face is laid on a table, and a player wearing a blindfold uses touch to place the eyes, eyebrows, nose, and mouth in the right spot. Often, teammates gather around and shout directions. Of course, since fukuwarai is all about laughter, sometimes the player’s teammates purposefully shout out the wrong directions in order to create the most ridiculous face possible!

The origins of fukuwarai are unknown, but laughter is traditionally associated with good fortune. In fact, there is a Japanese proverb that says:

“Fortune comes to the gate of laughter.”   笑う門には福来る

If you want to start off 2022 with a good dose of laughter, you might want to try fukuwarai! 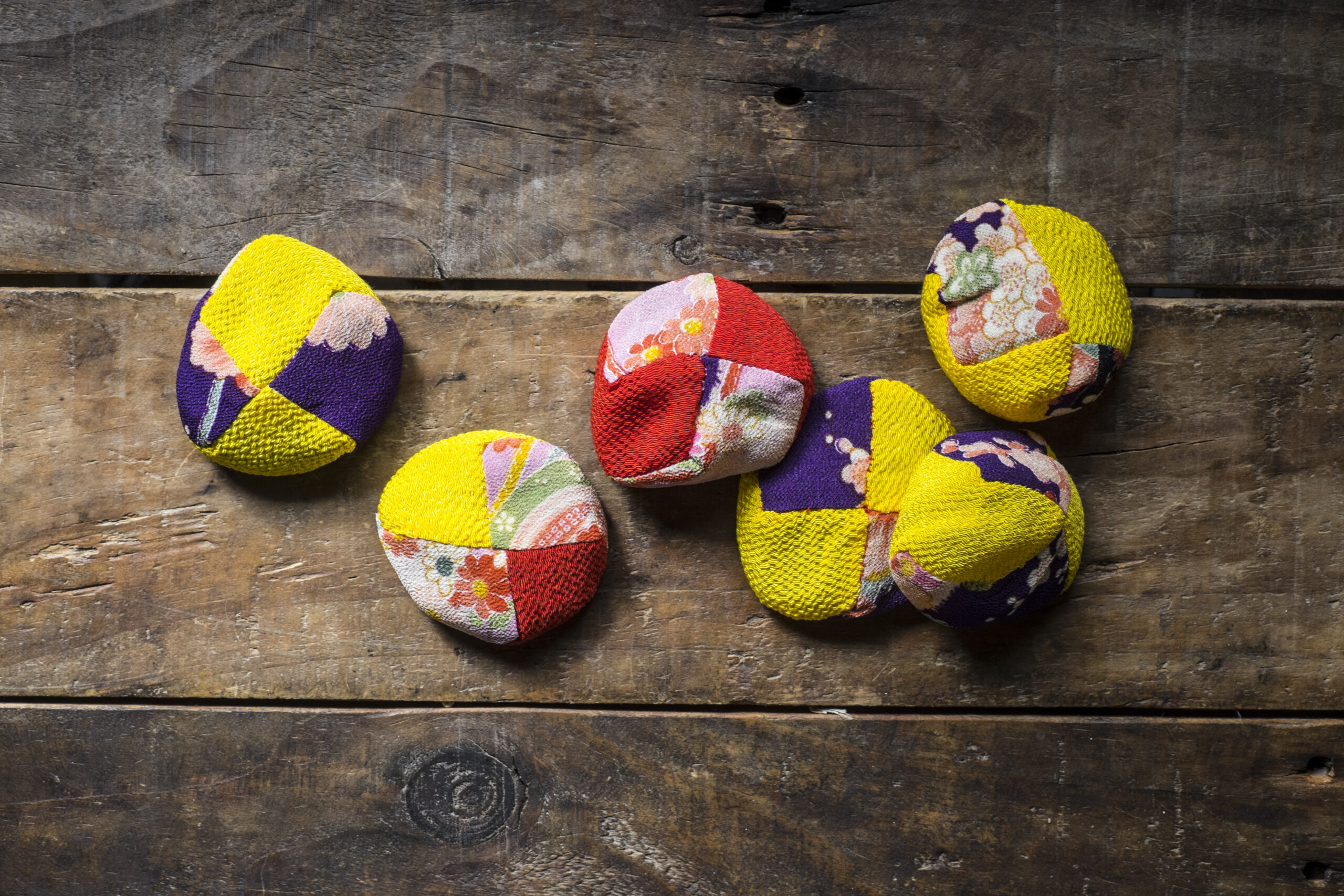 Otedama お手玉 is a simple game that dates back to the Heian Period. Otedama is both the name of the game and the name of the little bean-filled cloth bags used to play it. Many Japanese children have handmade otedama made for them by their grandmas. Otedama is similar to juggling but usually, only two bean bags are used. One simple way to play is to toss both bean bags in the air at the same time, clap your hands, and catch them again. Do this on repeat, increasing the number of claps each time. Another is to again toss them in the air at the same time, then catch them with the backs of your hands, and from the backs of your hands flick them into the air and catch them in your fists. The rules are not fixed, so children are free to use their creativity to develop their own style of play. Otedama is supposed to be a good brain training for older folks as well as a good way to teach children fine motor skills. 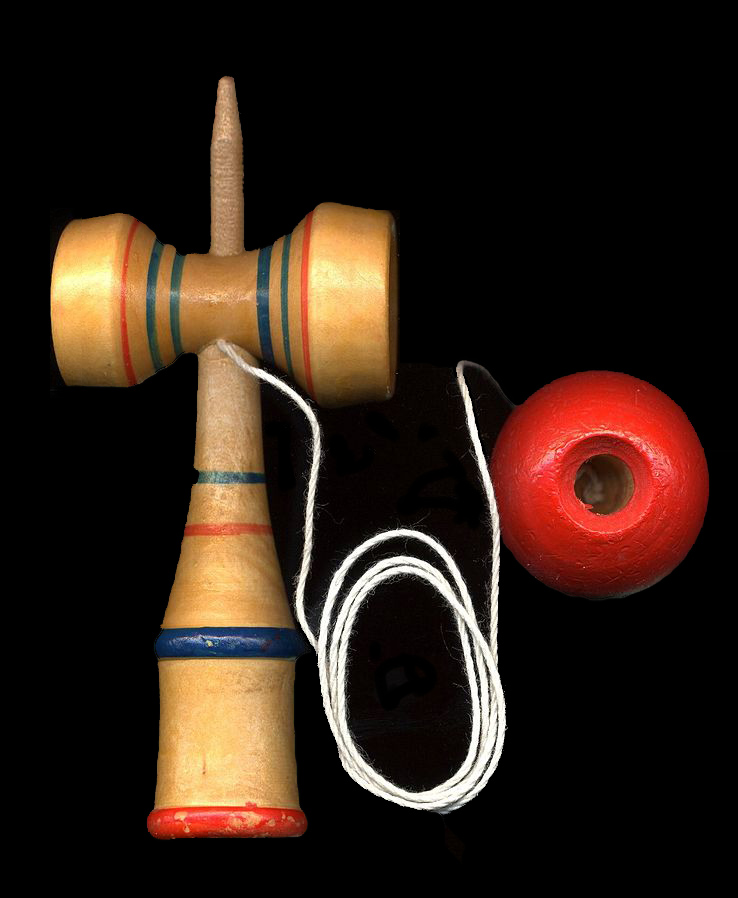 Another game that is popular both among adults and children is kendama. Kendama involves tossing a ball on a string into the air and catching it on either the spike, the large cup, or the small cup of the wooden receiver. It takes good hand-eye coordination, and once you get started, you might not be able to stop! Pro kendama players do fancy routines involving not only throwing and catching, but also balancing the ball on non-flat surfaces of the receiver or swinging the kendama by the ball and string. A quick search on YouTube will bring up pro player Shigeki Hiroshi, and his skills make kendama more of a sport than a simple game. If you’re looking to learn something new in 2022, why not try kendama? 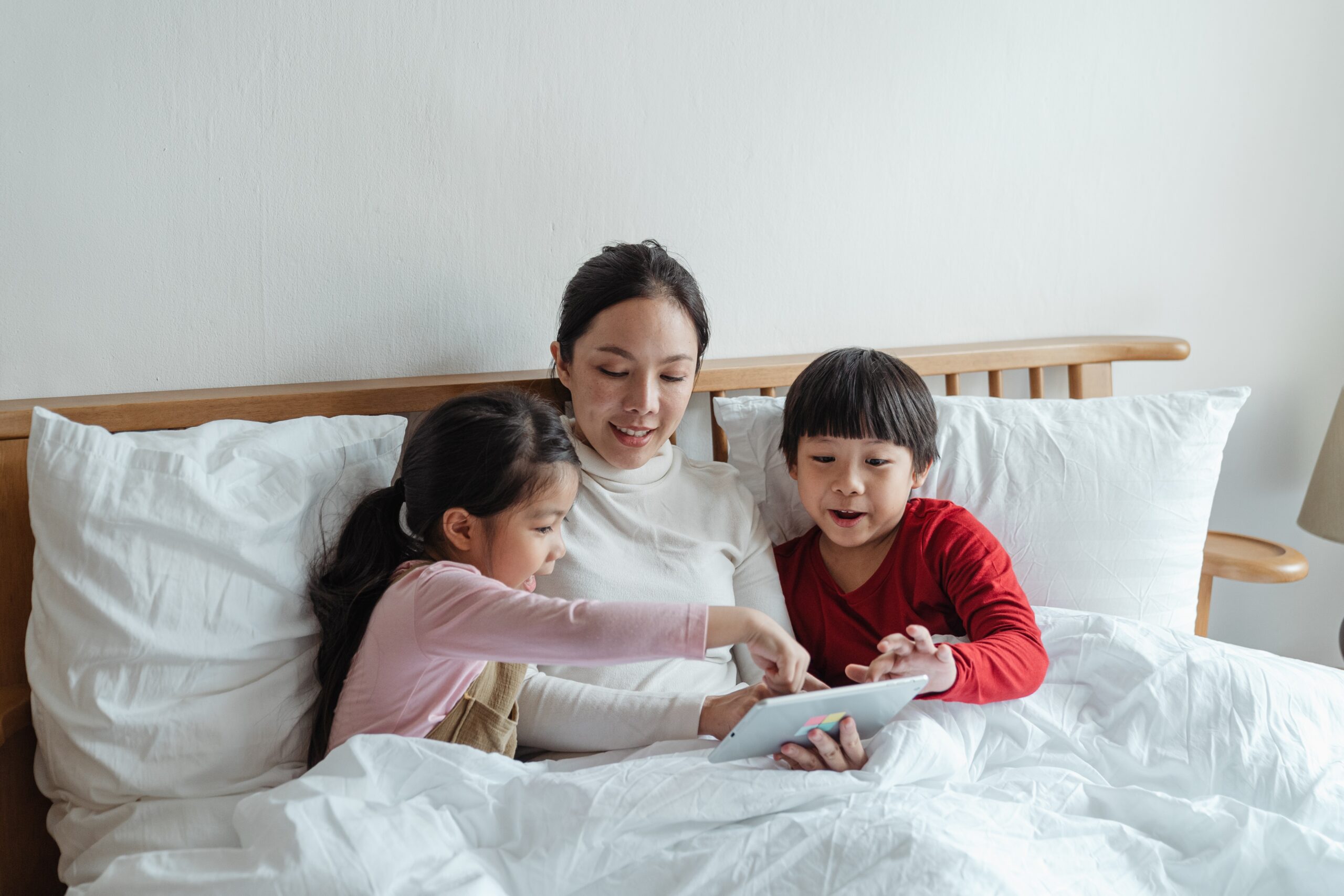 Games are all good fun, but one of the most common ways for many Japanese families to spend their New Year’s holiday is to watch toshi koshi bangumi 年越し番組, the special New Year’s TV programs. The top three shows are:

This NHK program was hugely popular with the obaachan sedai, grandpa and grandma’s generation, but these days, young people are watching it less and less. The entire program is quite long (it lasts for 4 and a half hours) and often features styles of music that don’t appeal to the youth. However, it’s worthwhile to watch it once and get a taste for some of the genres of music that has shaped the Japanese music industry throughout the years.

Translated as “Downtown’s We Aren’t Errand Boys!” is a Japanese comedy show hosted by “Downton,” a popular comedy duo. In it, guests try various different challenges and, if they fail, they have to play batsu game, which is a sort of comedic penalty game. If you have acquired the Japanese sense of humor, this will definitely be an entertaining watch. Although this year, it will not be playing over New Year’s Eve and New Year’s, they will be airing a special “Best 10” on Hulu, Thursday December 26th.

(Instead of Gaki No Tsukai, Nippon TV will be airing a program called Narikiri School なりきり学園, in which 46 different celebrities are enrolled in a school where they must do impersonations of each other)

This collegiate relay marathon between Ōtemachi and Hakone is popular both with younger people and older folks, so if you are into sports, this might just be your show. The race spans two days and includes 20 teams of 10 runners each. Since 2015, Aoyama Gakuin University has won five times, while last year’s winner (2021) was Komazawa University. Hakone Ekiden is broadcast by Nihon TV.

Two other shows you might want to watch are AIBOU: Tokyo Detective 相棒, airing on January 1, 2022 from 9:00 p.m. to 11:15 p.m., and Geinō Jinkakutsuke Check 芸能人格付けチェック, also the 1st, but from 5:00 p.m. to 9:00 p.m. on TV Asahi. The latter is a show in which celebrities are tested on how exactly refined their tastes are. For example, this year guests will have to try different types of wine blindfolded and determine whether it’s a cheap wine or an expensive wine. 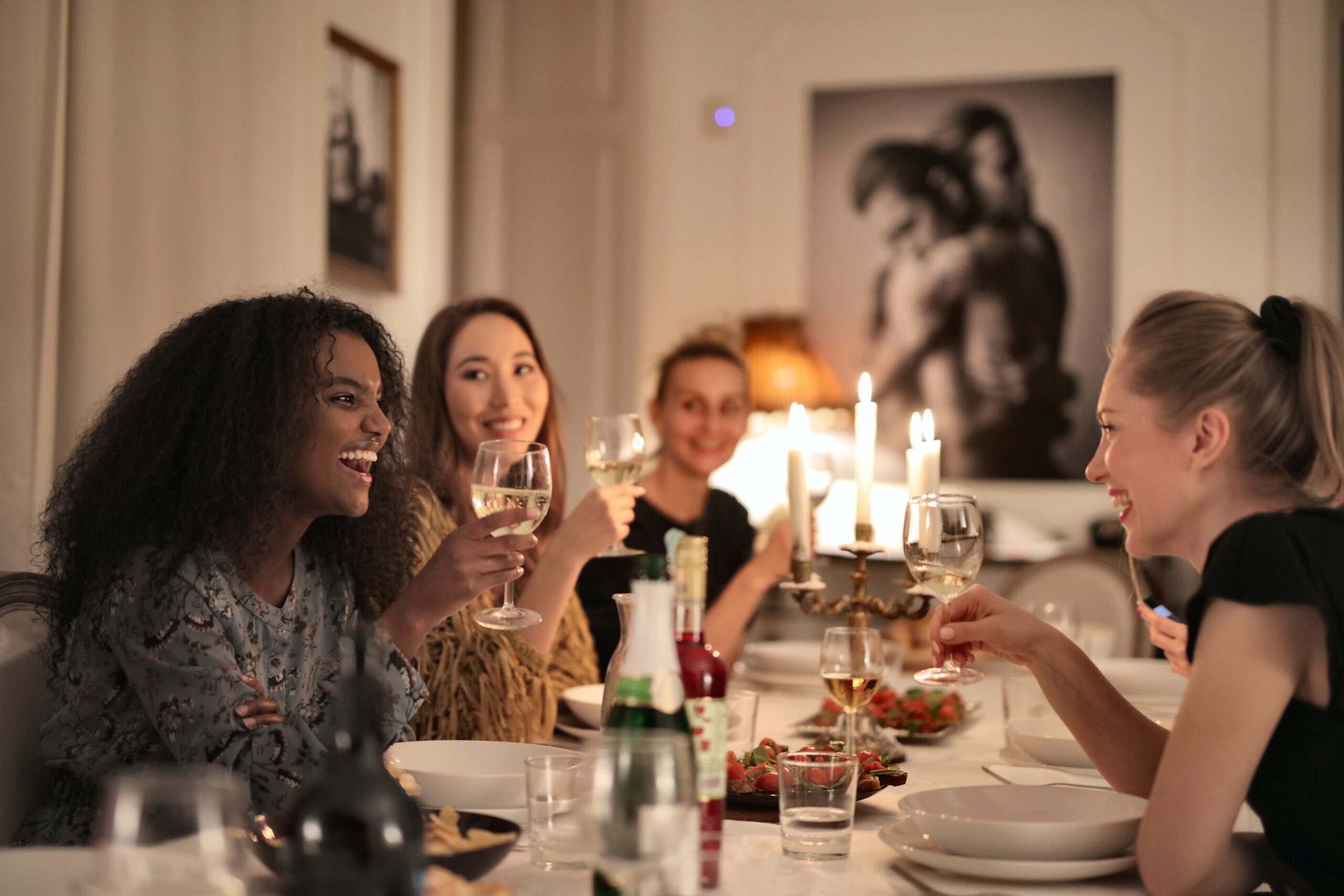 2021 was quite a ride for many of us, but 2022 is about to begin. It’s time for a fresh start, and whatever way you choose to spend your New Year’s holiday, let the neighbors hear you laughing! Happy New Year!