Celebrating Setsubun — Keep Evil Spirits Away from Your Apartment!

How to celebrate Setsubun in 5 easy steps, so you too can keep evil spirits away from your apartment this year!

It’s almost February, so if you live in Japan, you may have noticed oni masks and bags of beans popping up in stores for the past few weeks. These items are for celebrating Setsubun, the Japanese holiday which marks the transition between winter and spring. In fact, Setsubun (節分) literally translates to ‘seasonal division’. The festival is usually celebrated on February 3rd, the day before the first day of spring, according to the old Japanese calendar.

Due to COVID-19, many of the large festivals at temples and shrines will be canceled or scaled down this year. However, Setsubun’s main traditions are performed at home, making it the perfect social distancing holiday! In this article I explain how to celebrate Setsubun in five easy steps, so you too can keep evil spirits away from your apartment this year. 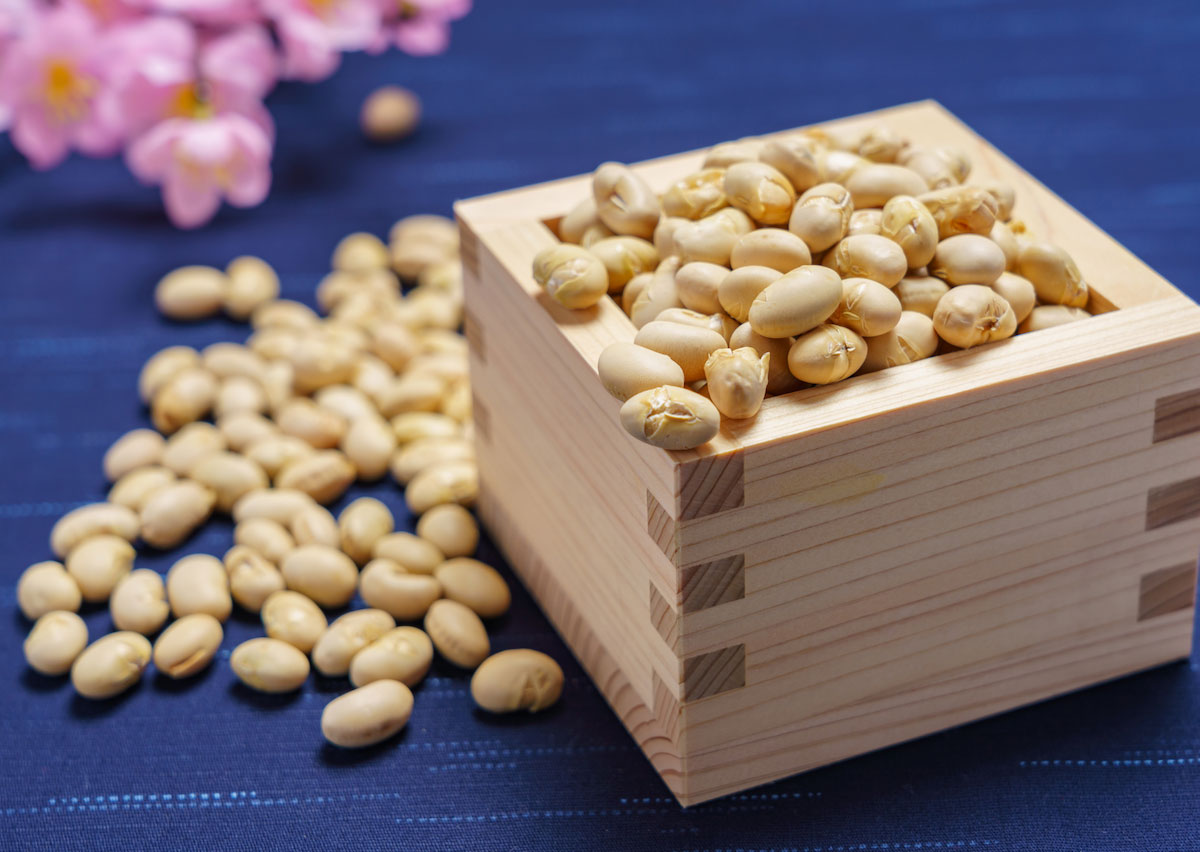 In ancient Japan, the new year was thought to be a time when the physical world and the spiritual world would collide. During this time, it was easier for wandering spirits to enter your home, causing bad luck and illness. And so began the ritual of mamemaki (豆撒き, “bean scattering”), throwing beans to drive away these evil spirits.

Mamemaki is the main ritual of Setsubun, and is very easy (and fun) to perform. You simply throw roasted soybeans (called fukumame, 福豆, “fortune beans”) or roasted peanuts, out your front door. You should also eat as many soybeans as your age, another fortune-bringing practice. 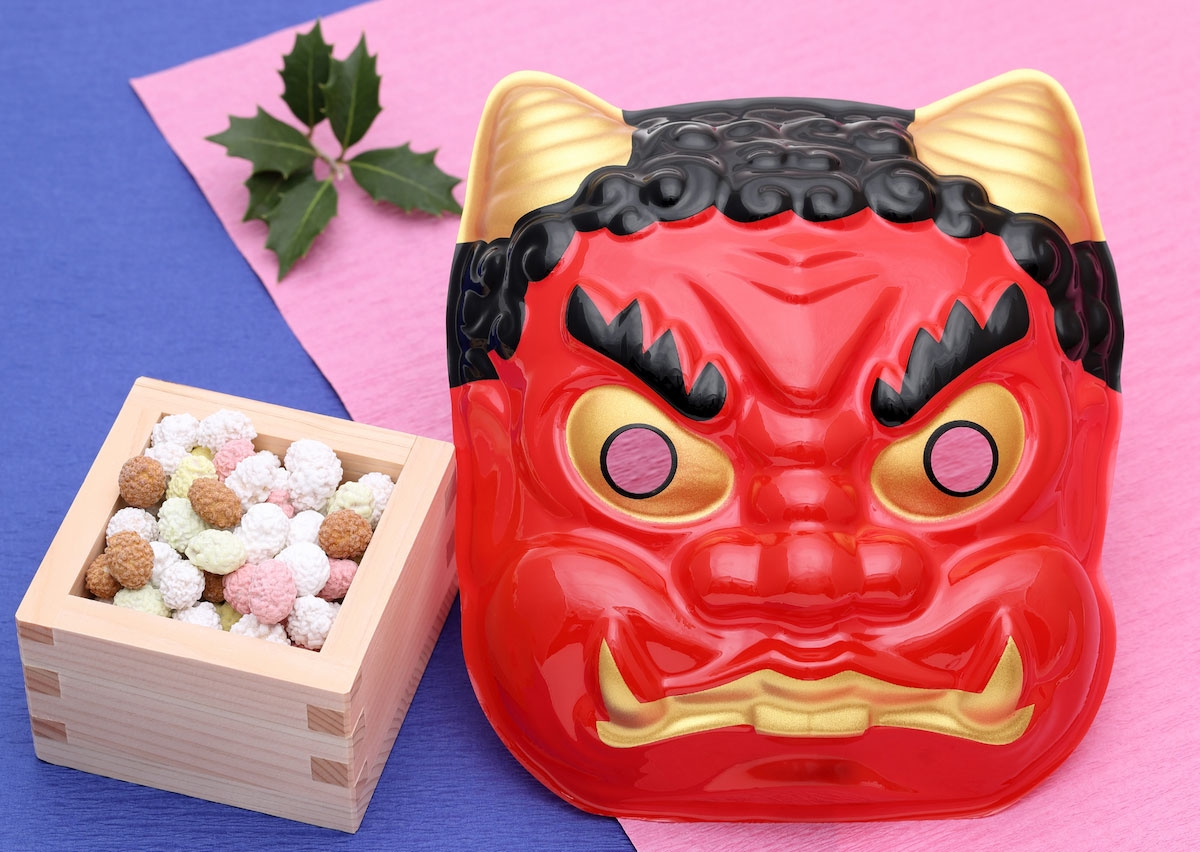 You don’t just have to scatter beans outside your door to drive the wandering spirits away, you can also throw them at a family member of your choice. For this part of the festival, one unlucky person dresses up like an oni (an evil ogre-like monster). Then you get to pelt them with beans while shouting “Oni out! Fortune in!”, or “Oni wa soto! Fuku wa uchi!” (鬼は外! 福は内!). You use the beans to drive the disguised oni out of the house, then slam the door behind them. A fun activity for the whole family! Just don’t forget to let your oni family member back in once you’re done. 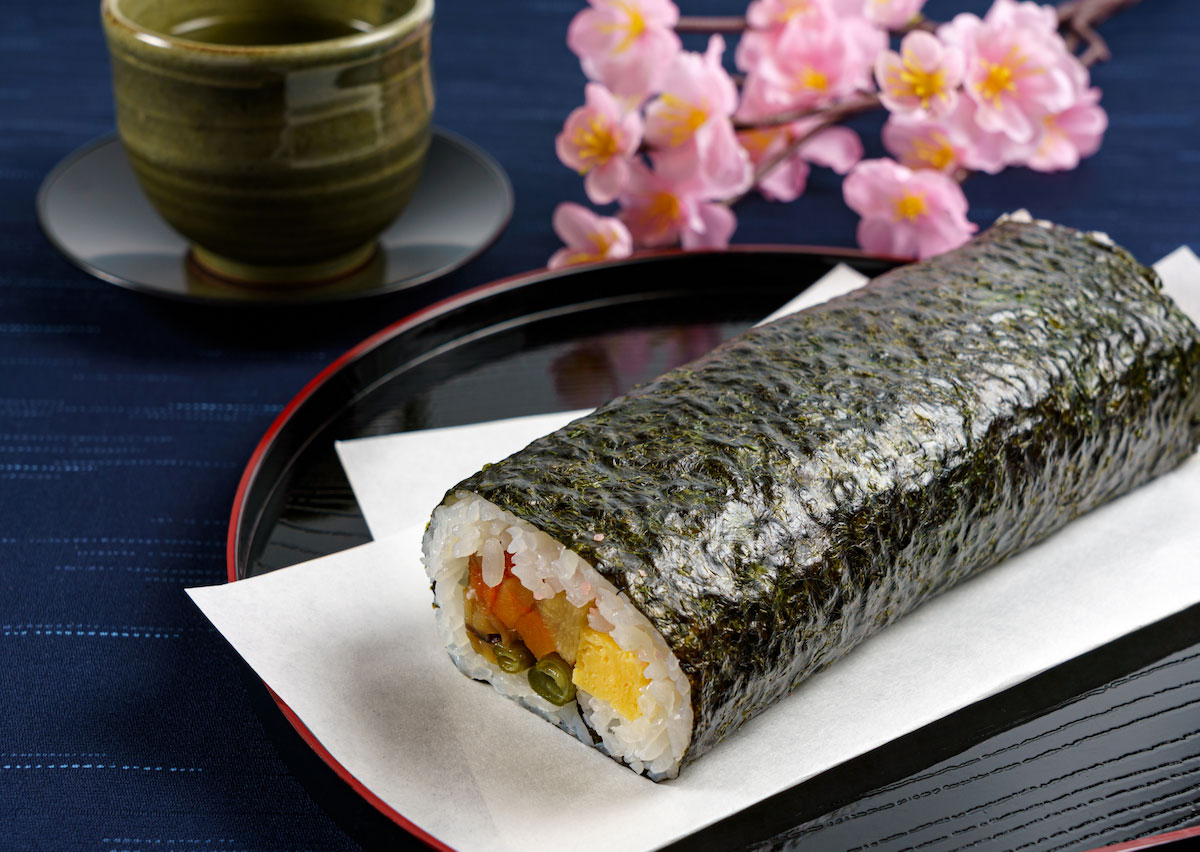 The ehō-maki (恵方巻, lit., “lucky direction roll”), is a sushi roll so giant it’s fit for an oni. Eating the ehō-maki also brings luck. The tradition originated in Kansai, but has since become popular all over Japan, thanks in part to marketing by grocery stores. There are all kinds of ehō-maki flavors; egg and cucumber, tuna-mayo, pickled plum….

For those without access to Japanese grocery stores, perhaps combining several normal rolls into a single giant one could work? You can also follow a recipe, like this traditional one on Cookpad, or this adorable one with rolls shaped like little oni heads.

To eat the ehō-maki , first you need to find your year’s lucky direction (it changes every year). Since 2021 is the year of the ox, the direction you should face is south-south-east (南南東). Then, you sit in that direction, while eating the giant roll in silence (not that you would be able to speak with such a big sushi stuffed in your mouth!) 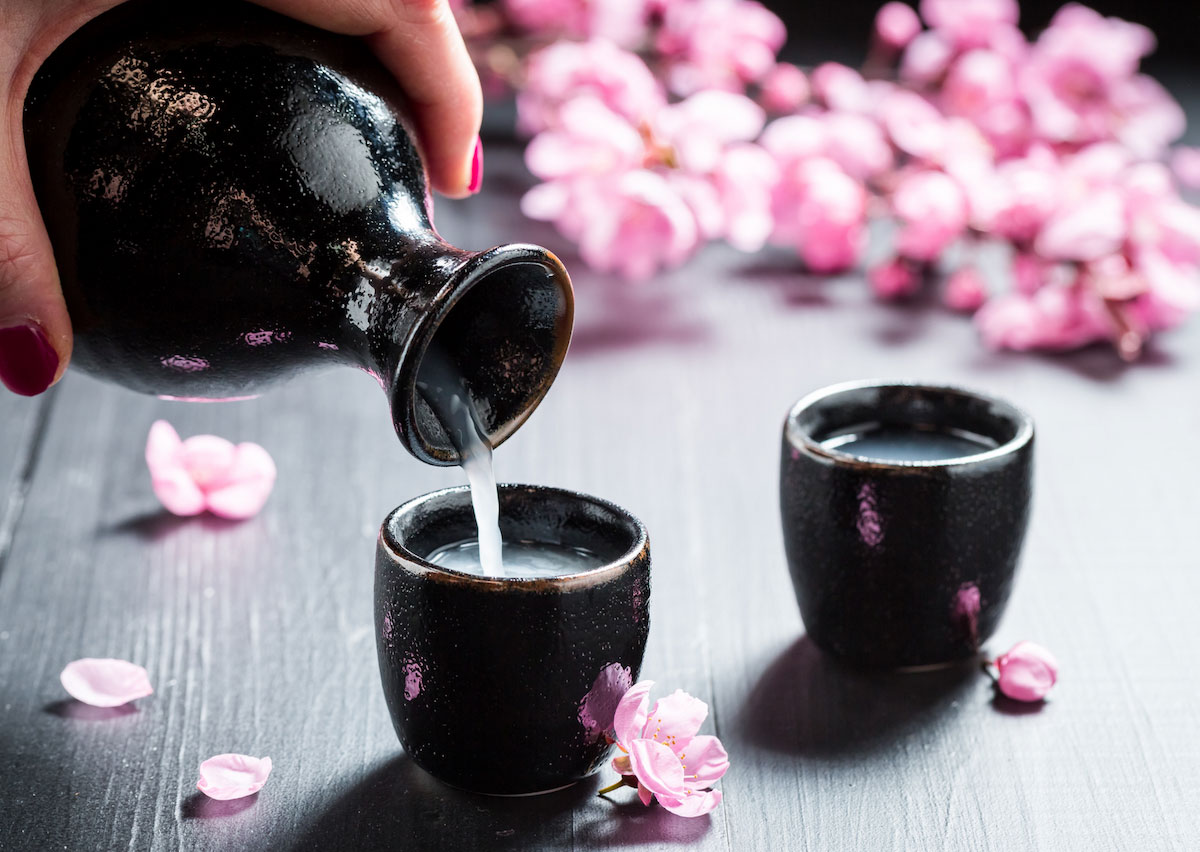 Another lesser known tradition of Setsubun is the drinking of shōgazake (生姜酒), a kind of sake brewed with ginger. It’s a festive holiday drink, like Setsubun’s version of eggnog. It can be found at festivals, and some Japanese grocery stores during the Setsubun season.

If you can’t find the actual shōgazake, it’s pretty easy to brew your own at home. There are two ways to make shōgazake:
-the proper way, which involves leaving sake to stew with ginger for 3 months (recipe here). However, it wouldn’t be ready in time for this year’s Setsubun…
-or, the faster way, by boiling some ginger and sake together, following this recipe.

Step 5. Haul out the Holly…. and Sardines? 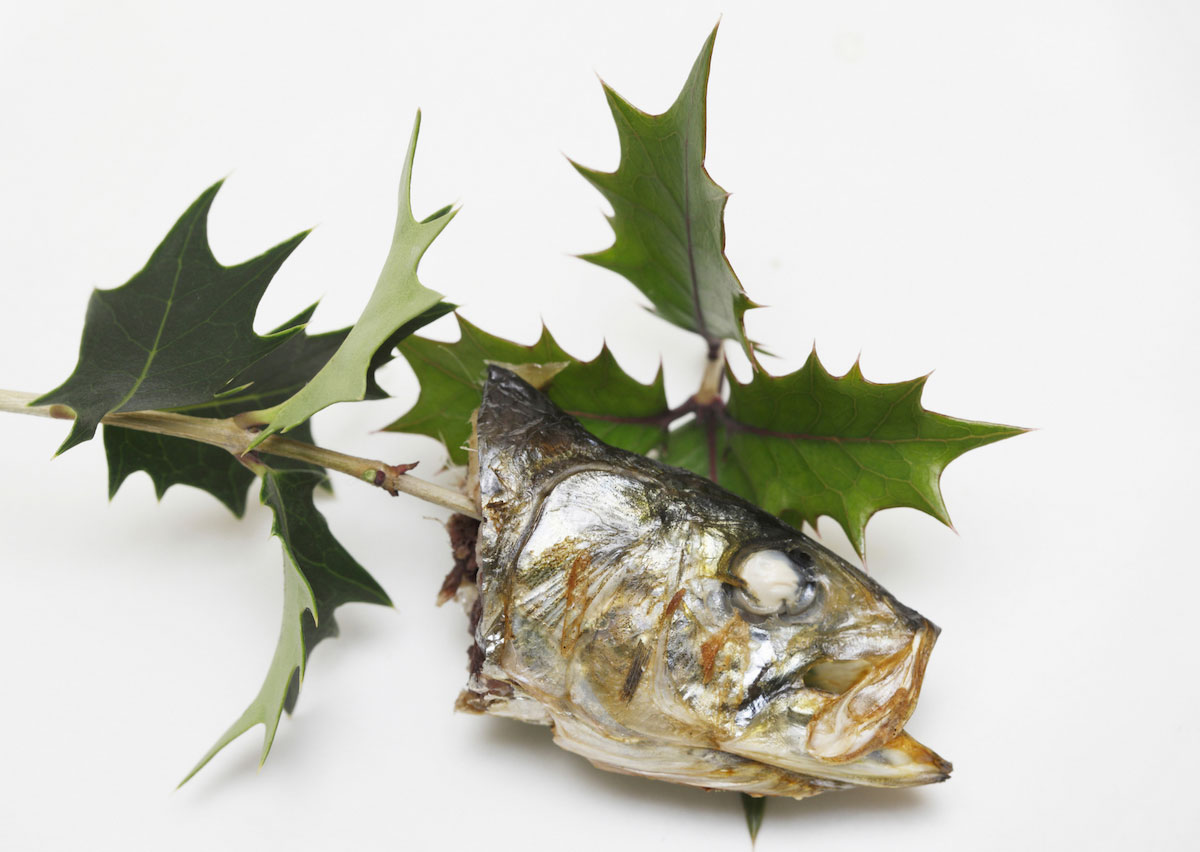 Another esoteric celebration involves hanging (dried) sardine heads and holly leaves at the entrance of your apartment or home. The decoration is called hiiragi iwashi (柊鰯), and is similar to the mistletoe and holly decorations hung up around Christmas in Europe and the US. Actually, the Christmas holly and the Setsubun holly have similar origins, as, in both Druidic and ancient Japanese cultures, hanging up holly was believed to drive away bad luck/evil.

Hanging these decorations up during Setsubun is also intended to keep evil spirits from entering your home. Although, if you live in a country that doesn’t typically celebrate Setsubun, they will probably drive away your neighbours too!