Every month in Japan seams to have something celebrated. June marks the arrival of Summer and with that the rainy season or Tsuyu as it’s known. Tsuyu means plum rain…
By Tokyo Room Finder • June 22, 2020

Every month in Japan seams to have something celebrated. June marks the arrival of Summer and with that the rainy season or Tsuyu as it’s known.

Tsuyu means plum rain (the rain that falls when the plums are ripe for picking). It is an important part of Japanese culture, harvesting the plums which can be made into liquor or preserved in salt to make umeboshi. I like to make onigiri with umeboshi plums and they are very good to aid digestion.

Another important part of Tsuyu is the planting of the rice paddies. The fields are flooded and all around Japan families and villages get together to plant the precious rice. You may in the early evening glimpse fireflies or hear the sound of frogs. This is all part of the experience of the season .

During Tsuyu it is Ajisai season also called Hydrangea. Their ball like blooms can be seen flowering all over Japan, even at the side of railway tracks.The Hase temple in Kamukura is a famous place well known for their 2500 ajisai along with the Hakusan -jinja Shrine in Tokyo which holds a Hydrangea festival where you can admire the 300 blooms and on weekends they hold small open air concerts. How about visiting the Mimurotoji Temple in the northern hills of Uji Kyoto where they have an ajisai garden it is even called the Ajisai Temple where you can see 50 species and ten thousand hydrangea plants. Along with hydrangea during the Tsuyu season you can see iris flowers a good place in Tokyo to see them is the Horikiri iris garden or in Kyoto at the Umenomiya-Taisha Shrine, with its charming bridges, ponds and traditional tea house. 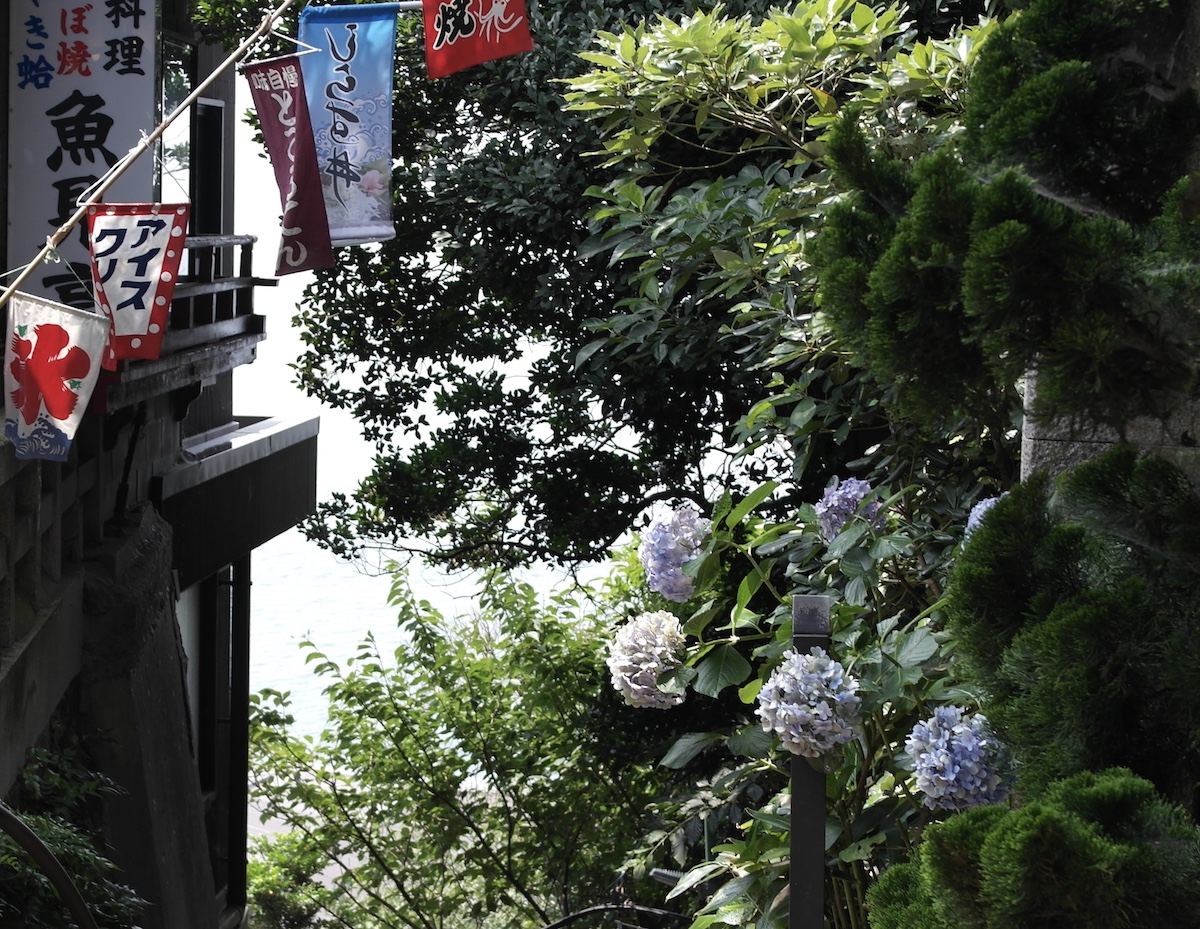 At the end of June you may see a circle of straw at Shinto shrines, this is known as Chinowa (the ring of purification). The ritual is known as Ooharae and is held twice a year on the 30th of June and December. People walk through the circle to be cleansed. You need to bow, and walk through the Chinowa and circle back to the front from the left, pass through again to the right, then pass through one last time. 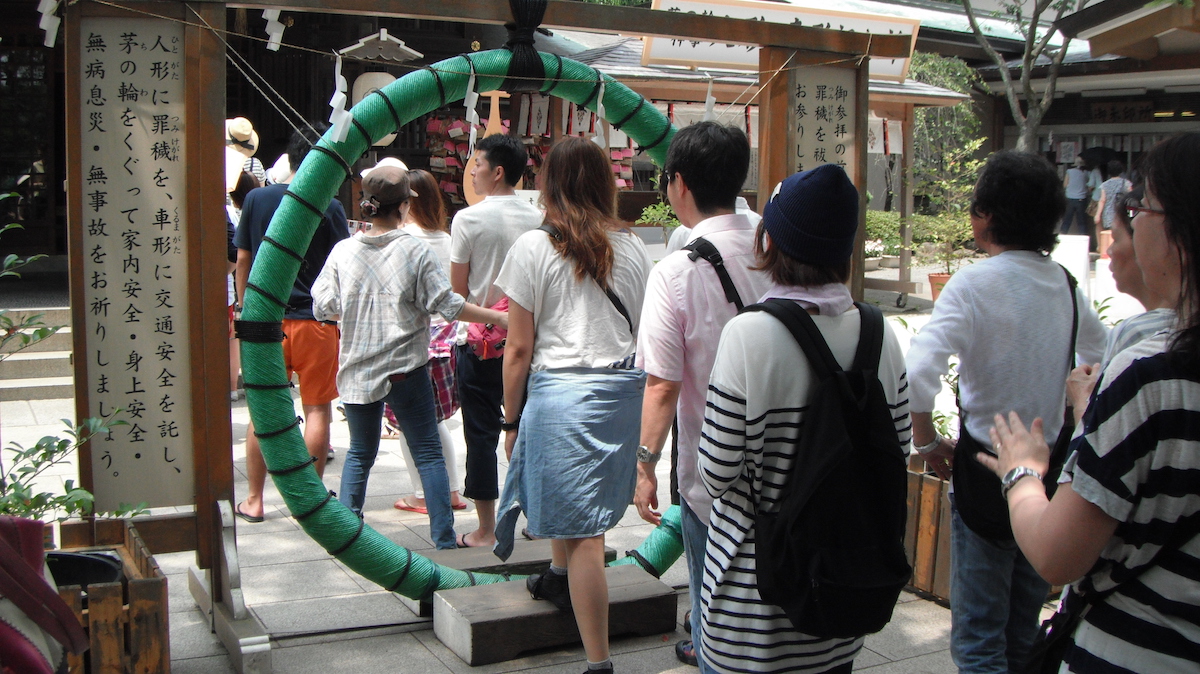 Another purification ritual is to eat a signature wagashi ( Japanese sweet) for June called minazuki. You may see minazuki being served at Japanese tea houses or being sold at wagashi shops. Minazuki is actually the old name for June. It has a special meaning known as a Nagoshi no Harae, which is something that wards of bad luck. People eat this during Tsuyu to pray for peace, good luck and ward of illness for the second half of the year. This exquisite Japanese sweet has a layer of rice jelly known as uirou, a mixture of rice flour, sugar and kuzu starch. If you would like a recipe to make it yourself it can be found on my website. The wagashi is then topped with sweet azuki beans and cut into triangles. The white jelly is said to resemble ice, to chase away summer heat and the beans are said to ward of evil. 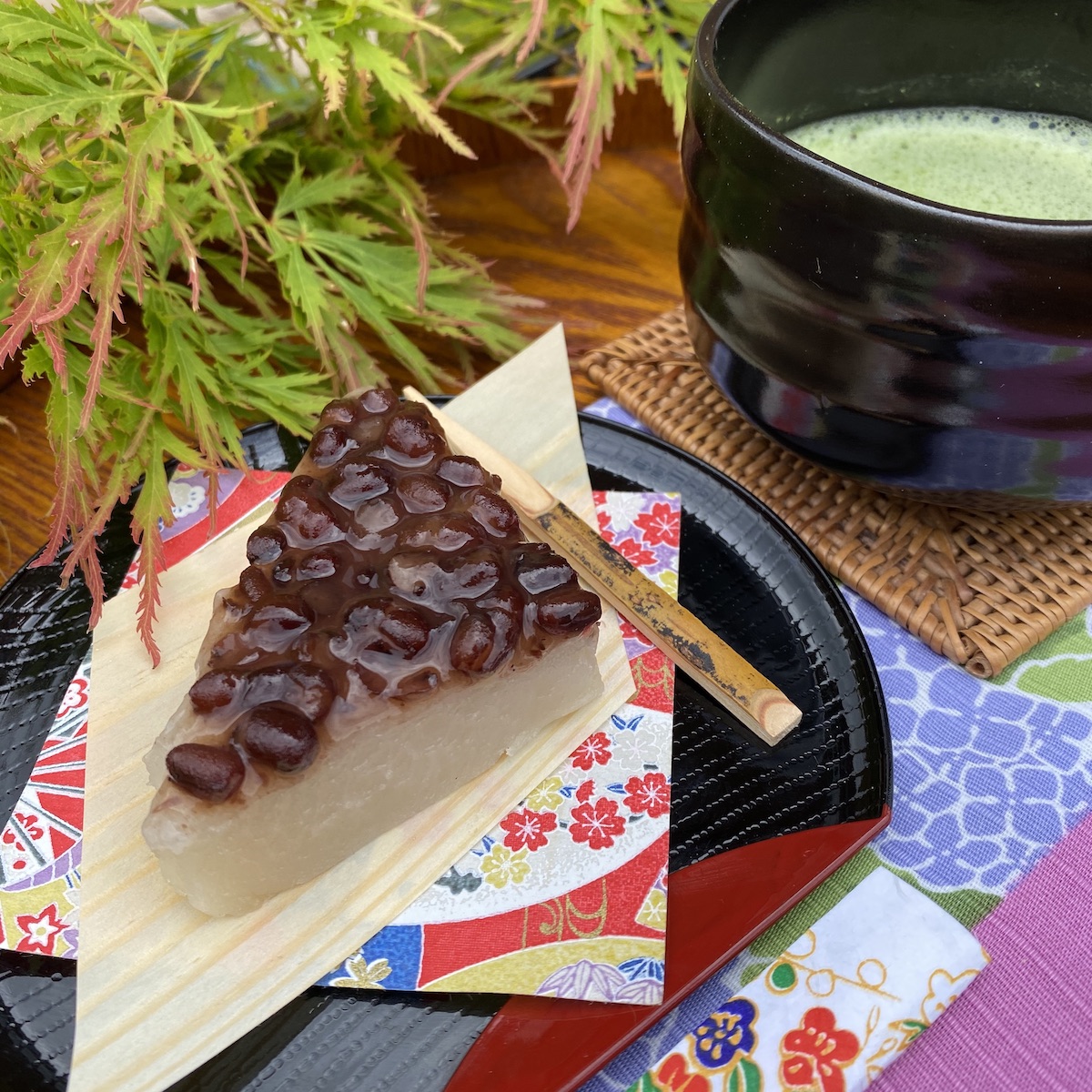 Have you heard of Teru Teru Bozu ? It is another tradition of the Tsuyu season. People make a handmade doll which looks a little bit like a ghost. It is actually a good weather monk which is hung in a window to pray for good weather the next day. Often this is done by children or farmers.

I think that’s one of the reasons I love Japan so much is every month and season is celebrated. Over June it maybe a time to stay home on a rainy day and make yourself some seasonal food or craft a Teru Teru Bozu, or maybe get your umbrella and raincoat and step out in search of Ajisai.
As you can see even a month that brings rain has something special to offer in Japan.