The Technological Wonder That Is The Japanese Toilet

Along with eating Sushi, taking a dip in the Onsen and wearing a Kimono, using a Japanese toilet should rank as one of the greatest cultural experiences of Japan.

A lot of things have shocked and amazed me about Japan but nothing has left me more flummoxed than the Japanese Toilet.

On my very first visit to Japan, I stumbled off my flight half asleep and entered the airport washroom, only to be confronted by a toilet that had so many buttons and controls on it, it almost rivaled an airplane cockpit. Now that I am used to the comforts a Japanese toilet has to offer, I think it is the best invention after the wheel.

There are two types of Japanese Toilets. One is the traditional squat style and the other is the modern bidet.

The squat toilet can be difficult to use for many foreigners, unless you are from an Asian country and have seen or used these toilets earlier. But what I want to talk about today is not the traditional squat toilet but the modern bidet.  The Japanese toilet was still rather primitive till 1903. Then the Japanese inventor Kazuchika Okura went to the west and fell in love with the toilets he saw there. He founded the Toto Company in 1917 and introduced the modern toilets to Japan. Since then the name Toto has been synonymous with toilets in Japan. But it was only in the 80s that the company started to innovate and came out with the WashletG series and from then on there was no looking back.

The Japanese toilet literally spoils you for choice with its various options. By simply pressing a few buttons, you can choose exactly what part of your ‘tenderness’ you want the water to hit. You can also adjust the water temperature as well as the pressure by choosing between a low pressure setting, a high-speed jet stream or a massage feature with oscillating and pulsating streams of water. After you are squeaky clean, just press another button to let warm air gently dry your behind.

It’s rather a surprise that a hand doesn’t shoot out to tenderly pat and powder your derriere as well. The more technologically enhanced washrooms also give you deodorizer spritzers, motion sensors that open the lid when someone walks in and a flush that will run as soon as you get up.  Another fantastic feature that I totally appreciated during winter was the seat warmer. This lets you adjust the temperature of the seat so that you have a nice, toasty warm place to sit on. Infact during the Japanese winters, the throne might be the most comfortable place to be on, since Japanese homes hardly have any central heating to speak of!

Earlier the toilet panel used to be only in Japanese leaving most of the foreigners totally baffled and intimidated. Fortunately, most of the modern toilets now come equipped with pictures or English explanations otherwise the non-Japanese speakers literally wouldn’t know what hit them. 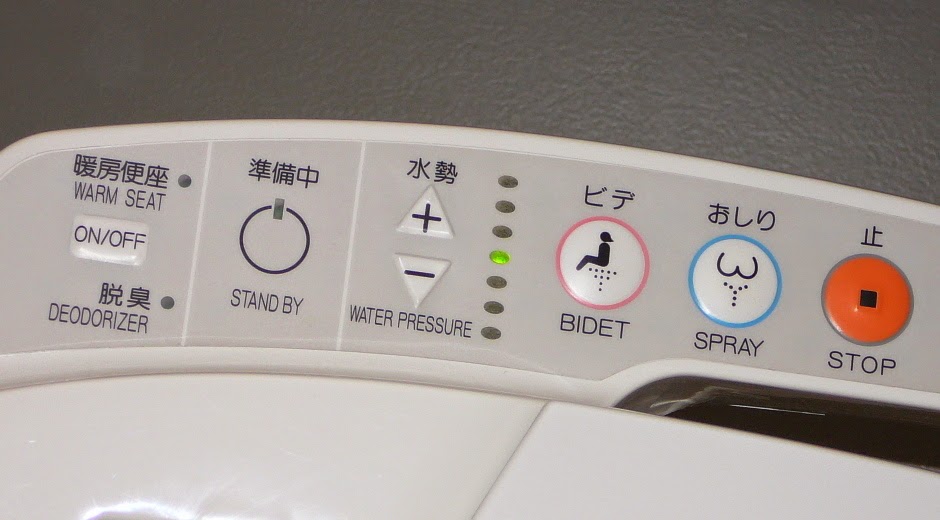 In most Japanese homes, the toilet is in a separate area from the bath area. The Japanese tend to divide areas into clean and unclean. Toilets are considered unclean and to minimize contact between the toilet and the rest of the house they keep a pair of slippers outside the toilet. You need to take off your normal slippers and use these when you enter the toilet.

Also, the Japanese save water as well as space in the most ingenious manner. Most homes have a toilet with a small sink mounted on the cistern. When you flush, the tap on the sink automatically releases water. As you wash your hands, the water goes inside the cistern, to be used the next time someone flushes. The Toilet flush also have a setting for small” (小) and “large” (大) and this indicates the amount of water used to flush.

Something that speaks volumes about the Japanese aversion to anything even slightly indelicate is the ‘Oto Hime’ or the ‘Sound Princess’. Japanese women being the sensitive sort, hate the sounds that betray their activity inside the toilet. The solution till a few years back was to flush continuously to drown all other sounds.

Then the Toto people thought of a small device that emits a sound whenever activated. So now by just pressing a button, the Japanese ladies can camouflage all noises and do their business in peace and without embarrassment. The camouflaging sound can be anything, a soothing tune, a song, or even the sound of a flush running.   In my humble opinion, along with eating Sushi, taking a dip in the Onsen and wearing a Kimono, using a Japanese toilet should rank as one of the greatest cultural experiences of Japan.

It takes a while to get the hang of such comforts, but once you do, you wonder about the primitive manner in which you have been using the washroom till now. It will make you forget about buying the usual camera and laptops, all you would want to do it is smuggle home a Japanese Toilet!