The history behind Japan’s love for cute, clumsy mascots

In the land of the cute and the bizarre that is Japan, mascots are everywhere. In this article, we’ll explore their history and why they’re popular.

Japan has a culture obsessed with anything that’s “kawaii” or cute. Spend any amount of time walking around the country and it’s not unlikely that you’ll find a cafe that serves desserts in the shape of adorable animal faces, or shops whose products are plastered with cute images.

One aspect of this obsession extends to cute mascots that represent almost everything. They’re known as yuru-kyara (sometimes read as yuru-chara) in Japanese — a combination of the word “yurui” meaning “loose, easygoing”, and “kyara” from “kyarakutaa”, the Japanese pronunciation of the word “character”.

In Japan, yuru-kyara are often used to promote something in a cute and memorable way. Companies might use them to promote a service or a product, and in local governments, there are mascots that are used to teach kids about things like fire or traffic safety.

Nowadays, yuru-kyara are more popularly used to promote local tourism. Japanese towns and prefectures would come up with a mascot that represents their area, and images of these mascots tend to be displayed on murals, posters, or even road signs. You can see an example of this with Jagata-kun below, the mascot for a town in Hokkaido called Kutchan. These mascots have been used in Japan for some time now, but the past decade saw more and more companies and local governments taking part in the mascot-based promotion. So much so that the official Yuru-Chara Grand Prix, a contest that determines the most popular mascot, has received around 1,000 entries in recent years. This means that all across Japan, there’s thousands of individual yuru-kyaras out there, displayed all over towns and cities.

How did this mascot craze in Japan even start? And how did they get so popular? Let’s take a look at a brief history of yuru-kyaras to figure out exactly how we got here.

The History of Japan’s mascots 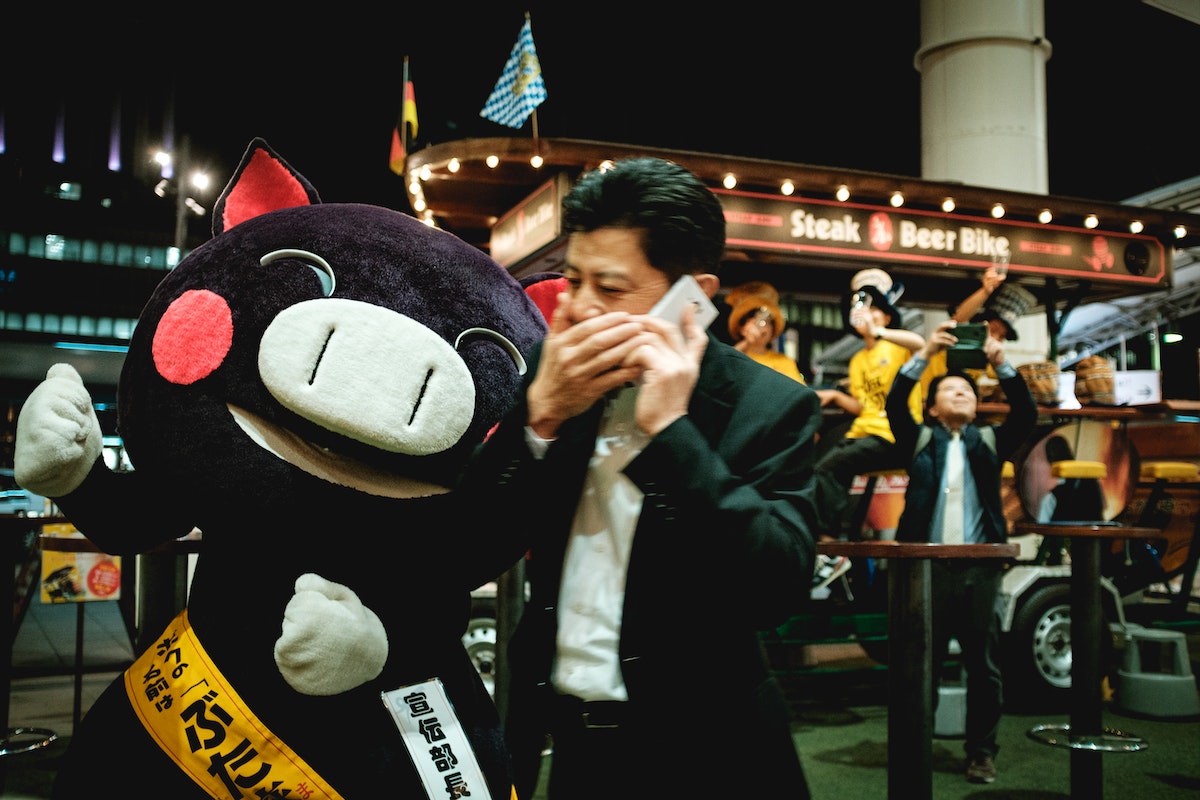 Mascots that represent local regions or companies in Japan have been around for some time. For example, the previously mentioned Jagata-kun has been representing Kutchan since 1991, and there have likely been more mascots that predate him.

The first mention of the rising popularity of yuru-kyaras came from an evening show that aired in 2008. The show used Hikonyan as an example, the cat mascot from Hikone City.

Hikonyan is a white cat wearing a samurai hat, and its design is based on the legend of a white cat and a feudal lord that served Hikone. The legend states that feudal lord Ii Naotaka was beckoned by a white cat to seek shelter from a storm, thus saving him from being struck by lightning. Hikonyan’s helmet design references this, since it’s based on the design of Ii’s family helmet.

Since then, yuru-kyaras have only become more popular. In 2010, the Yuru-Chara Grand Prix was launched, and people across Japan voted on the yuru-kyara they liked the most. The winner of the first grand prix was Hikonyan, who competed against 169 other entrants. Back when the segment on Hikonyan first aired, the mascot had already achieved an estimated 1.7 billion yen in souvenir sales, so it didn’t come as a surprise that it would be so popular in the contest too.

In 2011, the winner was Kumamon, the mascot of Kumamoto prefecture. After winning the contest, the prefecture earned 11.8 billion yen in merchandising revenue. Perhaps from seeing the potential in these mascots, more and more local governments and companies followed suit, and since 2013, the number of contest entries has steadily been in the 1,000 range.

However, 2020 saw the cancellation of the Yuru-kyara Grand Prix. The contest faced criticism in recent years because of the extent that some companies or regions are willing to go for the title. This led to its organizers deciding to cancel the competition altogether, stating, “Winning had become the goal, and the contest had lost its original purpose of revitalising the regions.”

Popularity of yuru-kyara outside of Japan

Despite the cancellation of the contest, the effect and popularity of these cuddly mascots remains, with a number of them even receiving international sales and media attention.

Kumamon, for instance, is quite popular when it comes to merchandise. Part of this is thanks to the mascot falling under free licensing, which means that anyone can use the image of Kumamon, as long as they also promote the prefecture. This has led to a plethora of Kumamon-themed merchandise being sold across the world.

Another yuru-kyara that received international attention is Chiitan, an unofficial otter mascot for the Japanese city of Susaki. Since 2013, Susaki has had its own mascot called Shinjo-kun, based on an extinct Japanese river otter that was last seen in the city’s Shinjo River.

In 2017, a similar-looking mascot called Chiitan was unofficially created for the city, and it rose in popularity all over the internet thanks to its social media posts where it can be seen falling over or doing stunts. You can see Chiitan on the left and Shinjo-kun on the right below.

But while Shinjo-kun stayed wholesome and helped promote Susaki, Chiitan continued to post videos of reckless stunts on social media. In 2019, Susaki officials received complaints from the locals about Chiitan’s videos, and its notoriety became well-documented in western media. The news satire show Last Week Tonight, for example, covered the controversy, and even created their own version of the mascot, called Chiijohn.

So despite the cancellation of the Yuru-Chara Grand Prix, it’s safe to say that in the future, we might just see more yuru-kyaras in places other than small Japanese towns.