Osaka has a lot to offer in the form of delicious food and fun, but for lovers of photography and fried foods, Shinsekai may be your perfect playground for Insta-worthy photos and Kushikatsu galore.

Jam packed with delicious food, shopping, and fun, Osaka tends to hover at the top of everyone’s travel bucket list. With so much to do, one can lose track of time and only visit highlights such as Dōtonbori, Umeda, and American Mura.

I must admit, I’ve visited Osaka more times than I can count, yet I always stick to the same few places, but a fluke chance brought me to a new area of Osaka that I just couldn’t stop thinking about: Shinsekai.

One of the first things you’ll notice about Shinsekai are the many restaurants serving one thing and one thing only: kushikatsu (串カツ) or kushiage (串揚げ). These delicious fried foods on sticks can be found all over Japan, as well as Osaka but Shinsekai specifically, has the most famous and delicious of the bunch.

The word “katsu” (カツ) can sometimes give the impression that you’ll be eating something with meat in it, since oftentimes it translates to “fried cutlet” and it’s most famous dishes include katsudon, katsu curry, chicken katsu and so on. But katsu can be anything as long as it’s fried with breadcrumbs, so vegetarians and vegans won’t be disappointed on their next visit to Shinsekai, there’s something for everyone!

Kushikatsu has a wide variety of options including all different types of treats such as tofu, quail egg, various vegetables, seafood and meat.

During my most recent visit to Shinsekai I tried fried renkon (lotus root), potato, onion, quail egg, salmon, shrimp, and of course the “OG” pork katsu. Once ordering you’ll find a bottle of katsu sauce at your table that you can use to drench your fried sticks in deliciousness. We all know sauce makes everything taste better, so why not give this lighter version a try? This kushikatsu sauce is a bit different and with it we find an exquisite balance of flavors that goes perfectly with the crunchiness of fried morsels and a swig of beer. 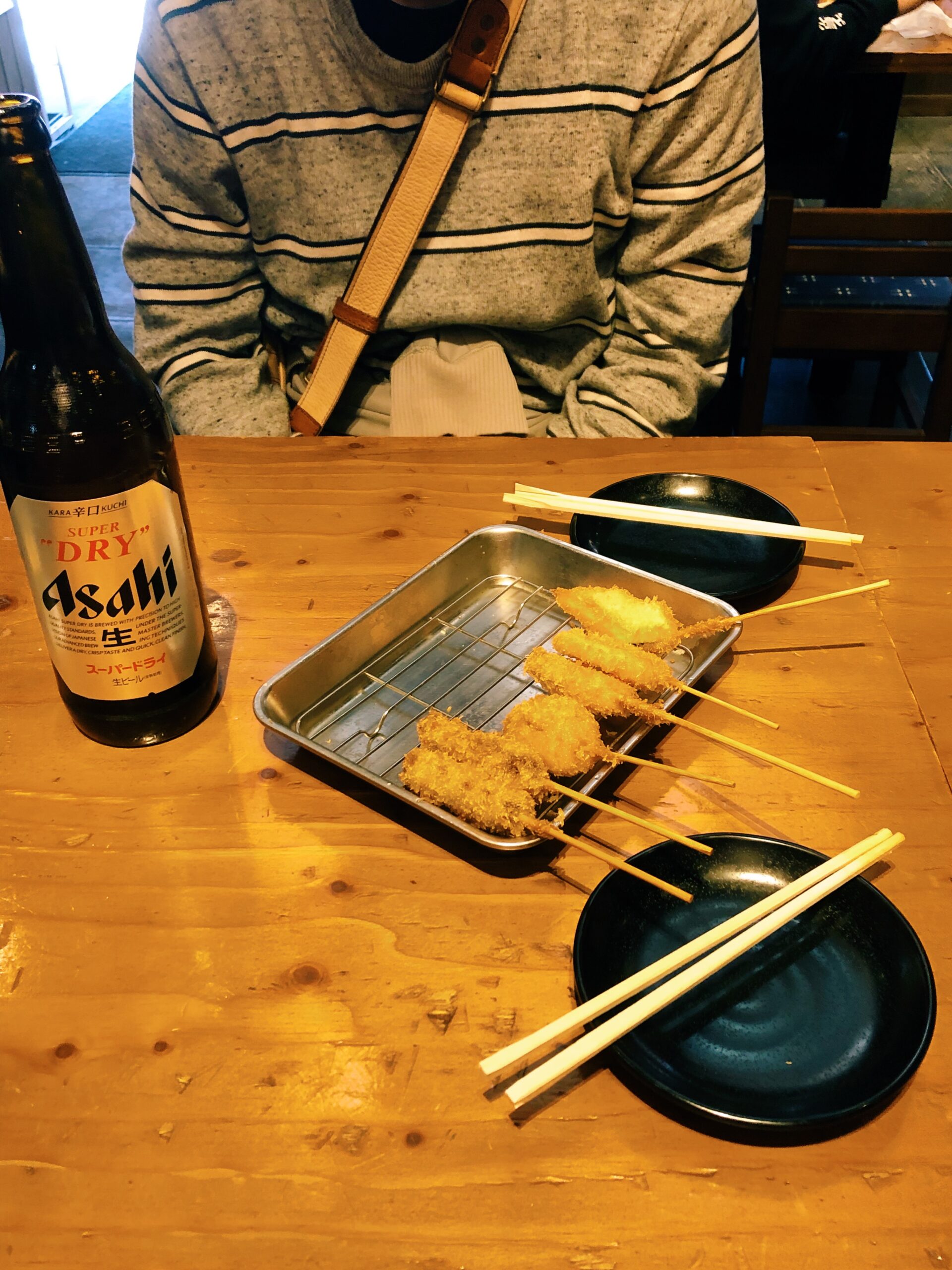 Wait what? Shooting in Japan? I was also surprised when I walked past the many stalls featuring colorful targets, bright lights, and yes, guns.

Though, as soon as I peered in and took a closer look, it was obvious this was just a game with toy rifles. A nostalgic wave washed over me as I was reminded of the fairgrounds I used to attend in Del Mar as a child. Not exactly the same as what you’d see in the other parts of the world, but still very much bolstering that retro-carnival feel. These shooting galleries were truly a spectacle and a pleasant surprise among the very popular kushikatsu restaurants and gift shops.

Shateki (射的) is described as a shooting game using a toy rifle that shoots cork-like bullets at targets. The targets are actually the items you can win, and if you can knock one down with a cork bullet, you may end up with a special prize to commemorate your trip. 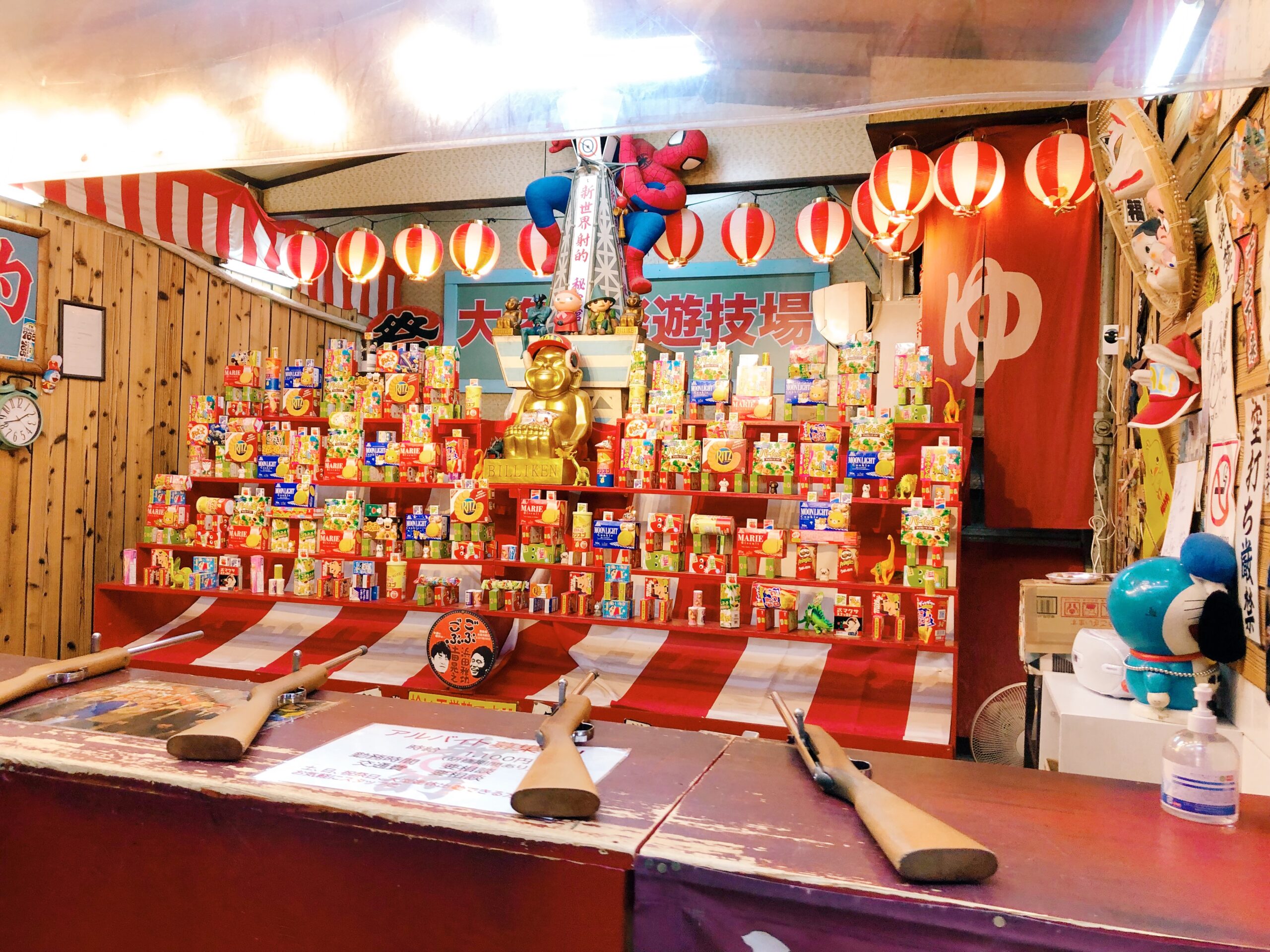 At the very center of all the colorful buildings and hubbub of the shooting arcades, you’ll see Shinsekai’s famous tower, Tsutenkaku (通天閣) translating to “tower reaching heaven.” Not only is it a lovely spot to take a photo, it also has some interesting history behind it.

Tsutenkaku was first erected in 1912 and at the time was “the second tallest structure in Asia”(source). Tsutenkaku was part of a bigger concept called “Luna Park” which was an amusement park mirroring Asakusa’s Luna Park that had just closed the year before in 1911. Both Shinsekai and Asakua’s amusement parks took inspiration from Brooklyn’s Coney Island, Luna Park based in the U.S. which opened in 1903.

Shinsekai’s Luna Park had a relatively short life and closed in 1923. Meanwhile, Shinsekai’s tower, Tsutenkaku, burned down in 1943 and wasn’t rebuilt until after the war in 1956. 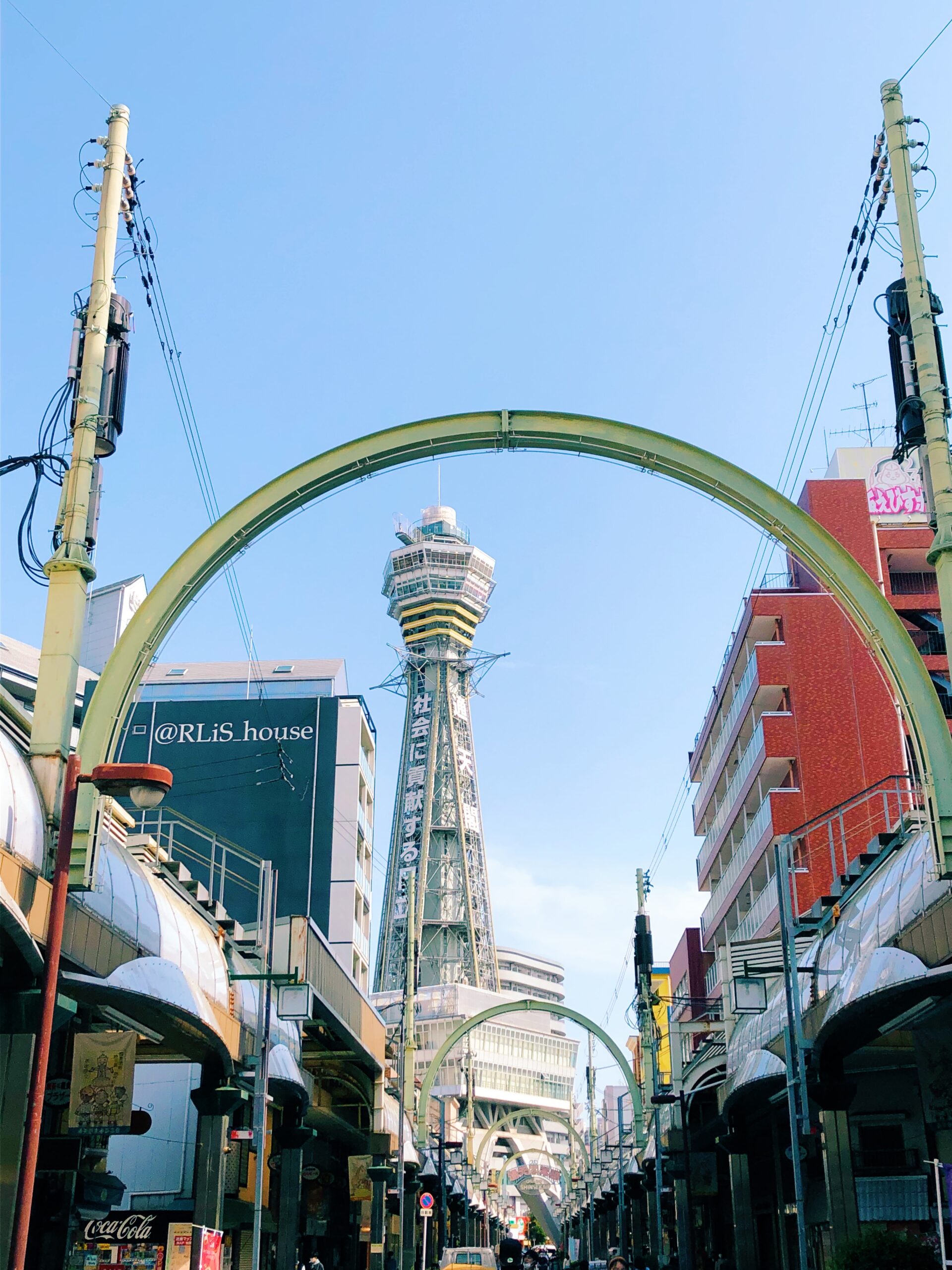 One of the key points of the current Tsutenkaku is the outdoor observatory deck called “Tenbo Paradise.” Tenbo Paradise is at the very top of the tower and will cost you extra yen depending on the time of the day. According to Tsutenkaku’s website, this is the primo spot to “confess your love or propose” to that special someone, so if beautiful views aren’t your only goal here, it may be worth it to fork over the extra yennies.

The 5th floor is an indoor observatory hall and is decorated head to toe in gold! At the center of the room, a golden statue of Billiken, the god of luck, is displayed. Billiken was first enshrined at the original Tsutenkaku in 1912 and has since made a comeback. It’s said if you rub his feet, it’ll bring you good luck! You’ll find quite a few Billiken statues throughout Shinsekai, but Tsutenkaku’s Billiken is one the most popular, even though it’s technically not the original. The whereabouts of the original Billiken are still unknown. 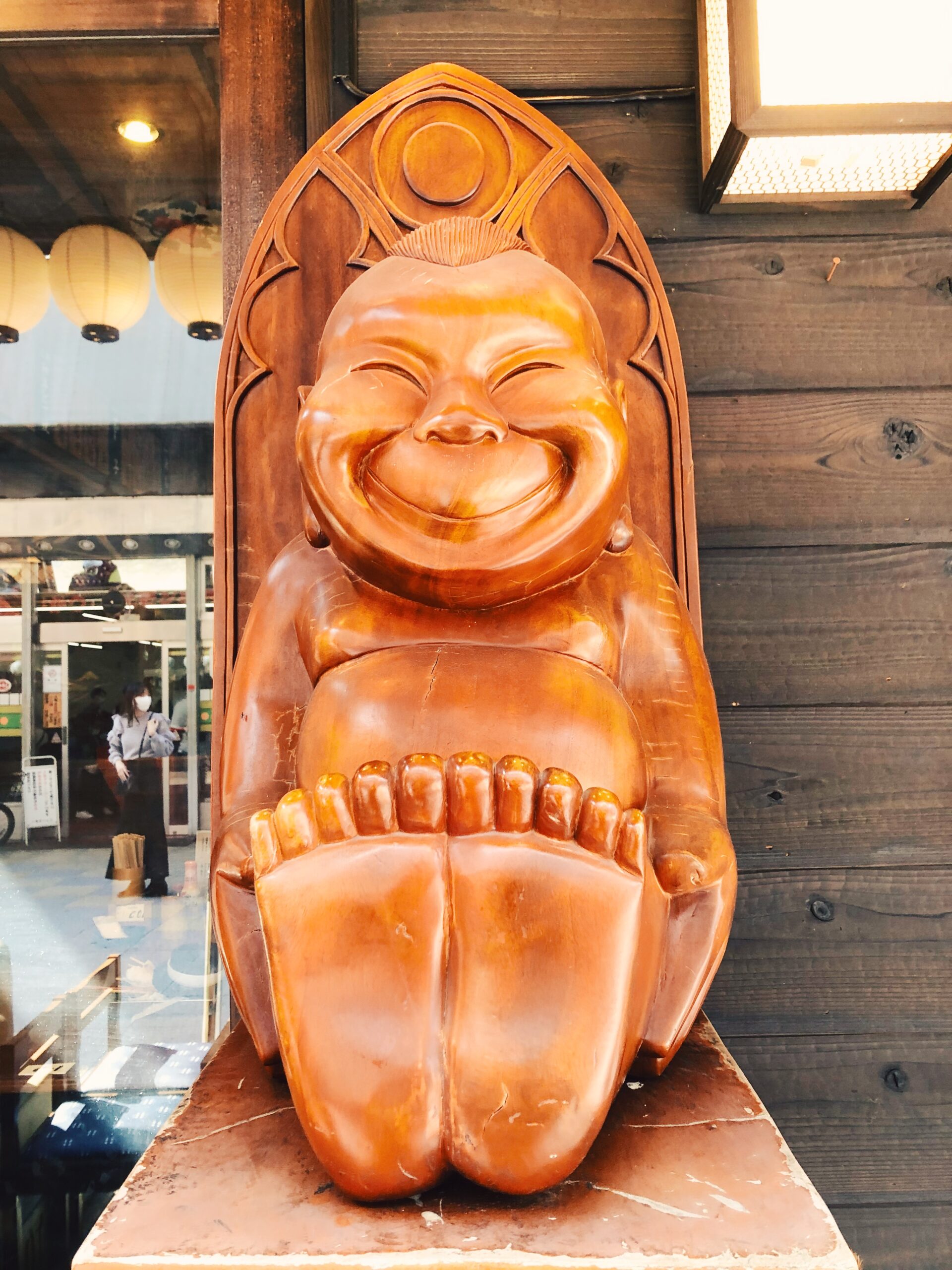 The third floor of the tower is home to a newly built slide that just opened in May 2022, called the “Tower Slider.” The transparent slide was added as a way to boost the popularity of Tsutenkaku which recently had been declining. The Tower Slider admission is 1,000 yen, not including Tsutenkakku’s regular observatory admission. The slide shoots you down the third floor back to the first basement floor and also acts as an escape route in case of an emergency!

Tsutenkaku has many more points of interest including a Japanese garden, another observatory deck, shopping, restaurants, and even educational installations about the history of Luna Park and Shinsekai. The general observatory fee is 900 yen for adults and 400 yen for children. Extra fees may apply if you choose to go all the way up to Tenbo Paradise.

Although there is much to do in Shinsekai, it’s definitely an area that won’t take a whole day to explore especially if you opt out of visiting the tower. Don’t get me wrong, the tower is a wonderful highlight, but it might not be everyone’s cup of tea.

After grabbing lunch and trying your hand at shateki, you may consider visiting Osaka’s Zoo which is only a short walk from Shinsekai area, located in Tennoji Park. Osaka Tennoji Zoo has a wide selection of animals and events so if you can manage a full day in the area, it’s worth hitting two birds with one stone! Entry for adults is 500 yen and entry for children is 200 yen. 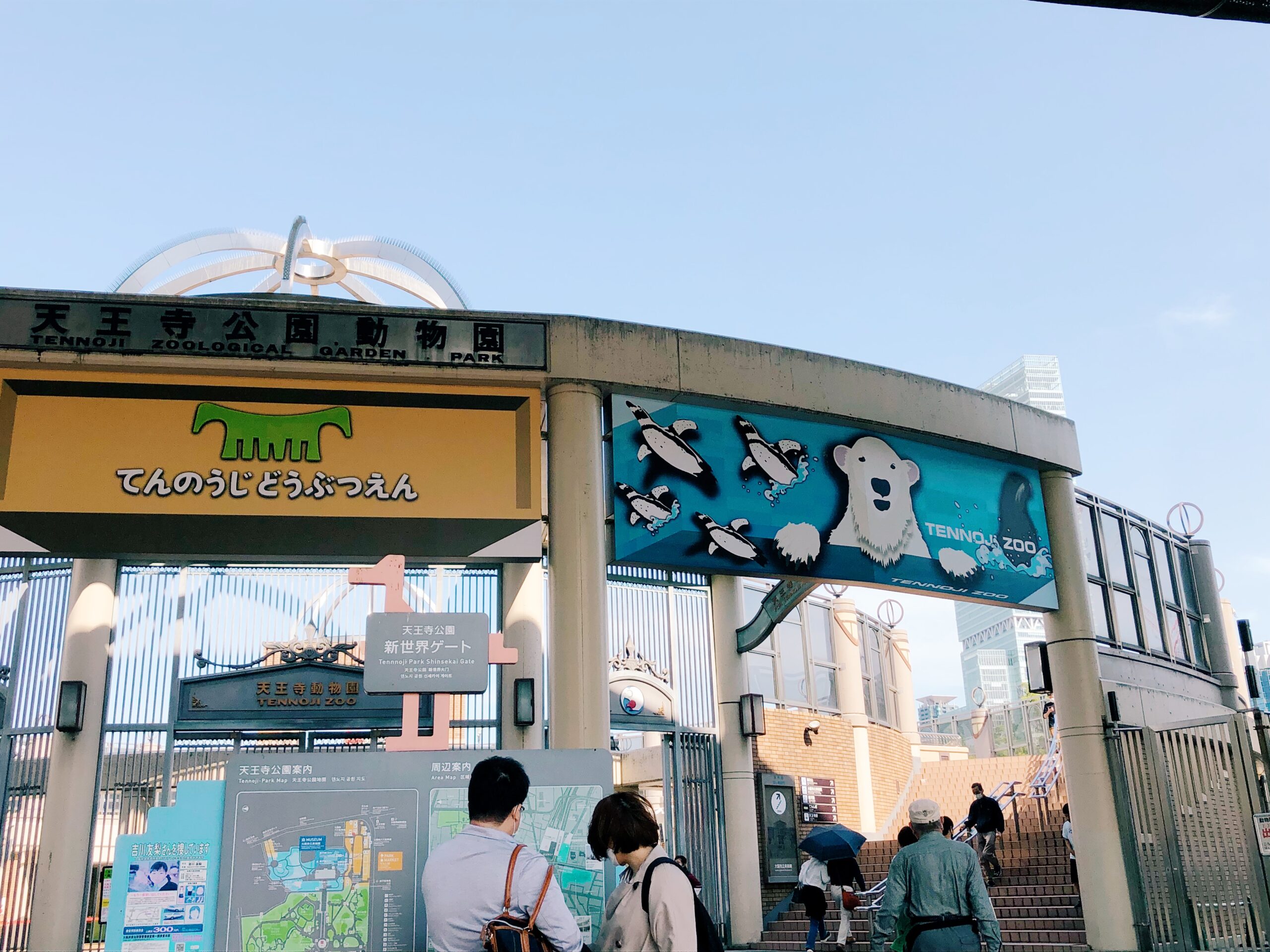 With all it has to offer, Shinsekai is one of Osaka’s gems that’s often overlooked. Although the area may not be considered “new” any longer, to travelers and locals, Shinsekai continues to charm and spark new curiosity. If you haven’t discovered Osaka’s New World yet, it may be time to add it to your next trip’s itinerary. 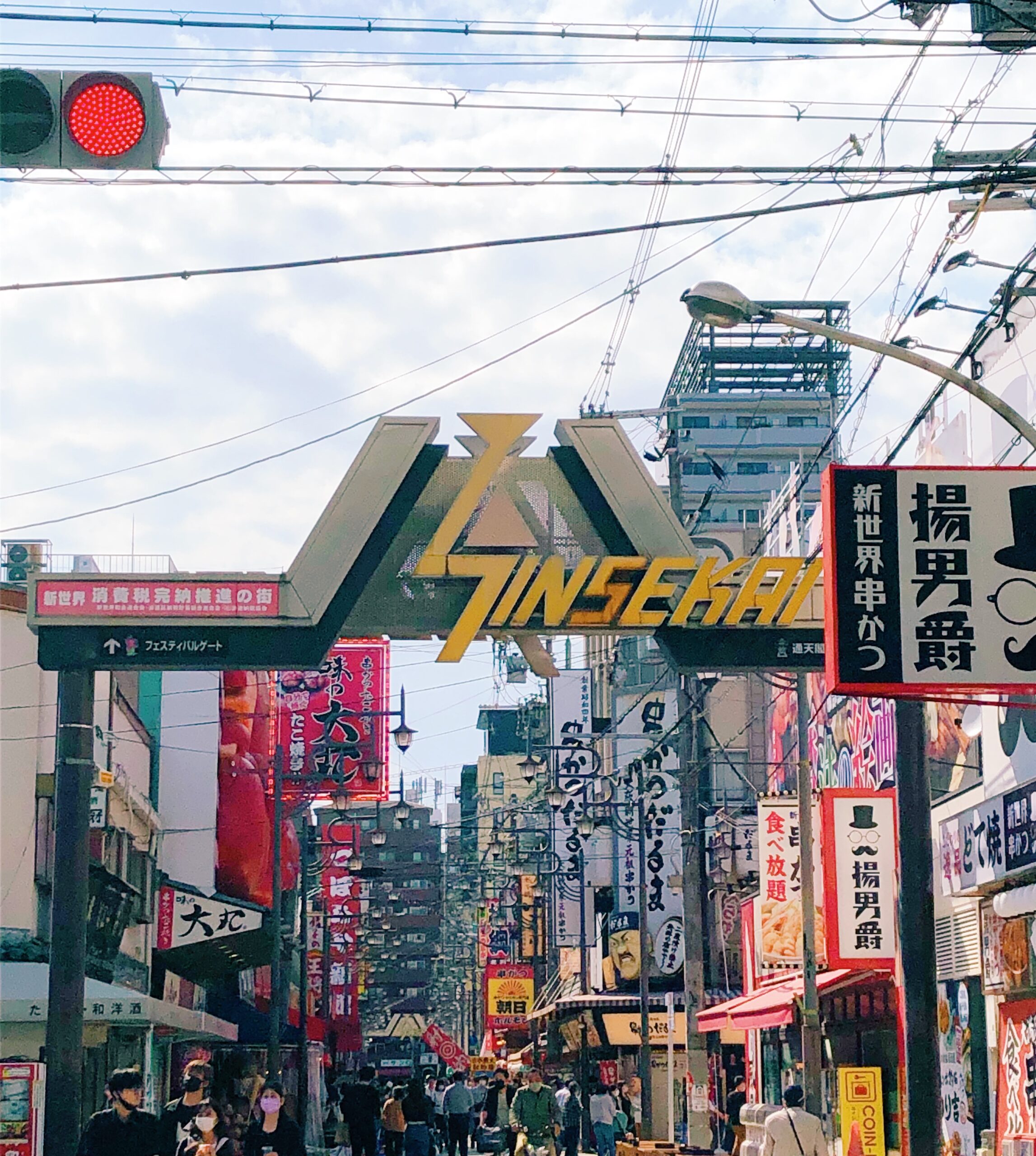 Shinsekai and Osaka Tennoji Zoo is just a short walk away from Ebisucho Station, Dobutsuen-mae Station, and Shin-Imamiya Station.

Dobutsuen-mae Station can be accessed by the Midosuji Line. On arrival, take Exit 1 and walk six minutes to Shinsekai or ten minutes to Osaka Tennoji Zoo.

Finally, if the JR is more your speed, you can also take the JR Loop Line or the Nankai Main Line into Shin-Imamiya Station. Take the Tsutenkaku Exit or East Exit and walk 6 minutes to either destination.