Taking a look at New Year’s in Japan: a day of meaning, tradition and historical beliefs

Japan has a unique way of celebrating New Year’s, one full of tradition and meaning. Let’s take a look at what they do differently and why.

For everyone else in the world, New Year’s is a day when you might expect lots of flashy fireworks and lively celebrations — after all, it’s when people are most excited to welcome in another year and see what lies ahead.

But in Japan, they do things quite differently. The new year isn’t greeted with anything loud or extravagant, but this also doesn’t mean that Japanese people don’t have their own way of celebrating. In this article, we’ll talk about what Japanese New Year’s traditions are like, and also explain the deeply-rooted history and beliefs connected to this special day.

A day of firsts 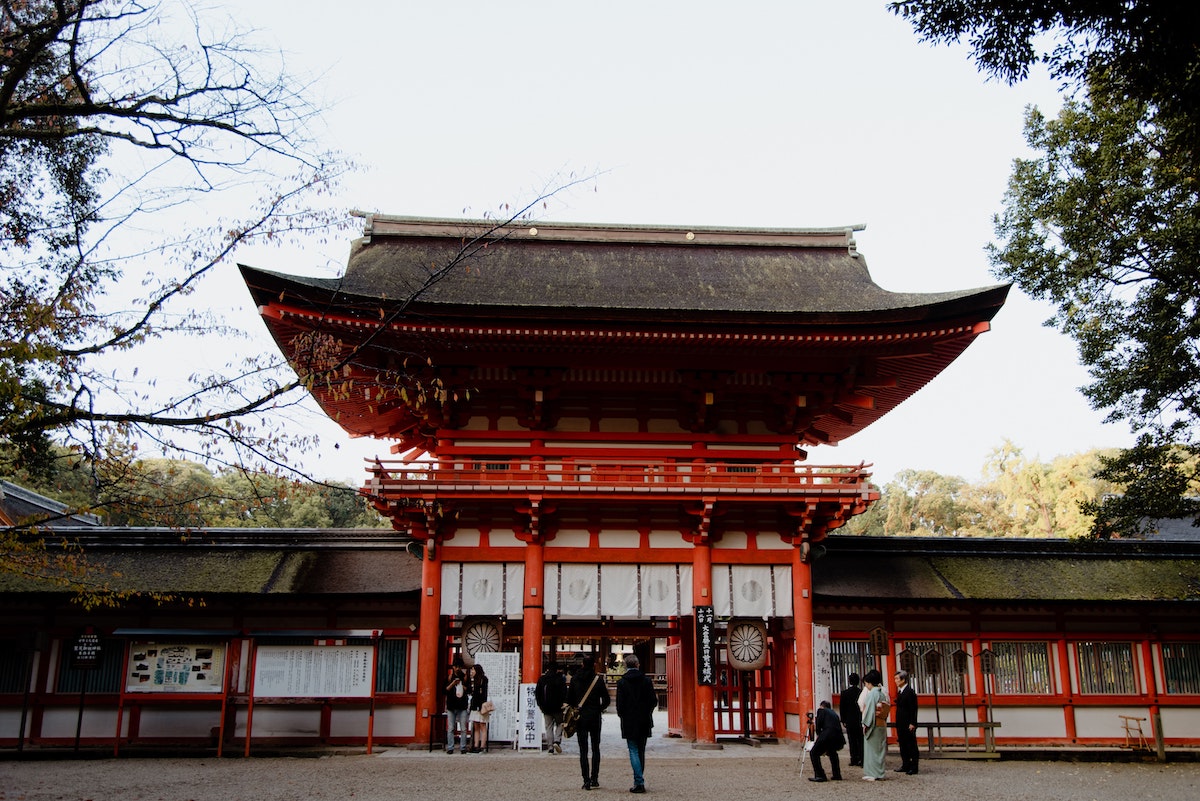 Japan has a history intertwined with Buddhism and Shintoism. Although a lot of people in Japan are considered to be more traditional than religious, there are a number of practices linked to the two religions that are still being observed today.

The start of the year is marked by one such example: hatsumode (初詣). Visiting a temple or shrine between the 1st and 3rd of January is what defines this tradition, and people can choose to visit somewhere that’s close to them or one of the larger, more popular places. Meiji Jingu in Tokyo, for example, reported around 3.1 million hatsumode visitors in 2019.

During their visit, Japanese people often wish for luck to be granted onto them for the rest of the year. People might also buy new omamori, or Japanese amulets, and bring in their old ones to be returned to the shrine or temple. Aside from being a good luck charm, certain types of omamori can have different meanings attached to them, like wishing for business prosperity, health of one’s family, and protection from evil.

Another ‘first’ that draws less crowds but is still observed by plenty of Japanese people is the hatsuhinode (初日の出), which literally translates to “first sunrise of the year”. This practice involves leaving your home during the early hours of January 1st to go to a scenic spot to view the year’s first sunrise.

One particularly good spot for hatsuhinode is Mount Fuji. People would eagerly await around the foot of the mountain or somewhere where they can get a good angle, and enjoy the view as the sun pierces through the clouds and through Mount Fuji’s famous snowy peak. 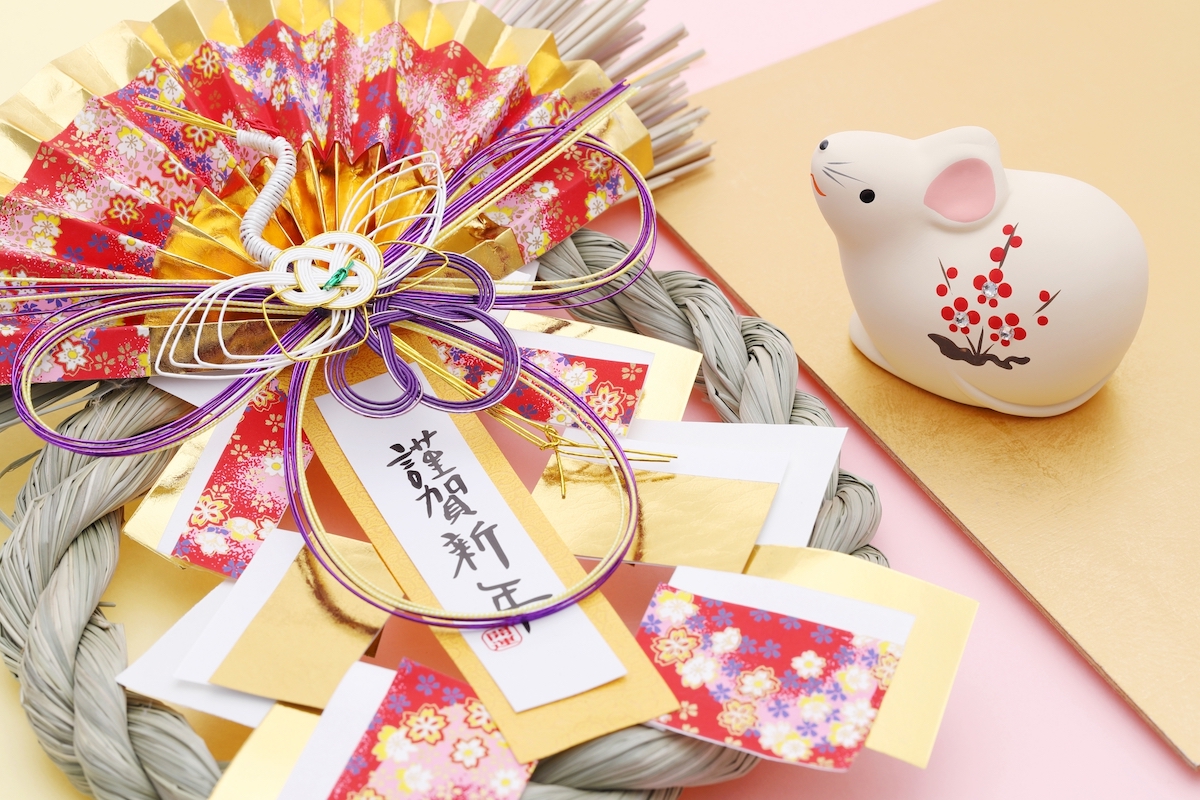 New Year’s traditions aren’t just about going to places however; celebration and enthusiasm for the upcoming year is also expressed through decorations in Japan. Japanese people decorate homes, offices and shrines with traditional objects that carry a symbolic meaning.

If you’ve ever passed by a residential neighborhood in Japan right around the New Year’s period, you might have noticed something unusual hanging on the front doors, like some kind of wreath that has leaves, ribbons, or a paper fan attached to it. This is called the “shimekazari” (注連飾り). The shimekazari is something that is believed to keep evil spirits away while also welcoming the New Year’s gods at the same time.

Temples and shrines also have something similar that serves the same purpose. Called a “shimenawa” (注連縄), these sacred ropes are a lot larger and less ornate than their residential counterparts. 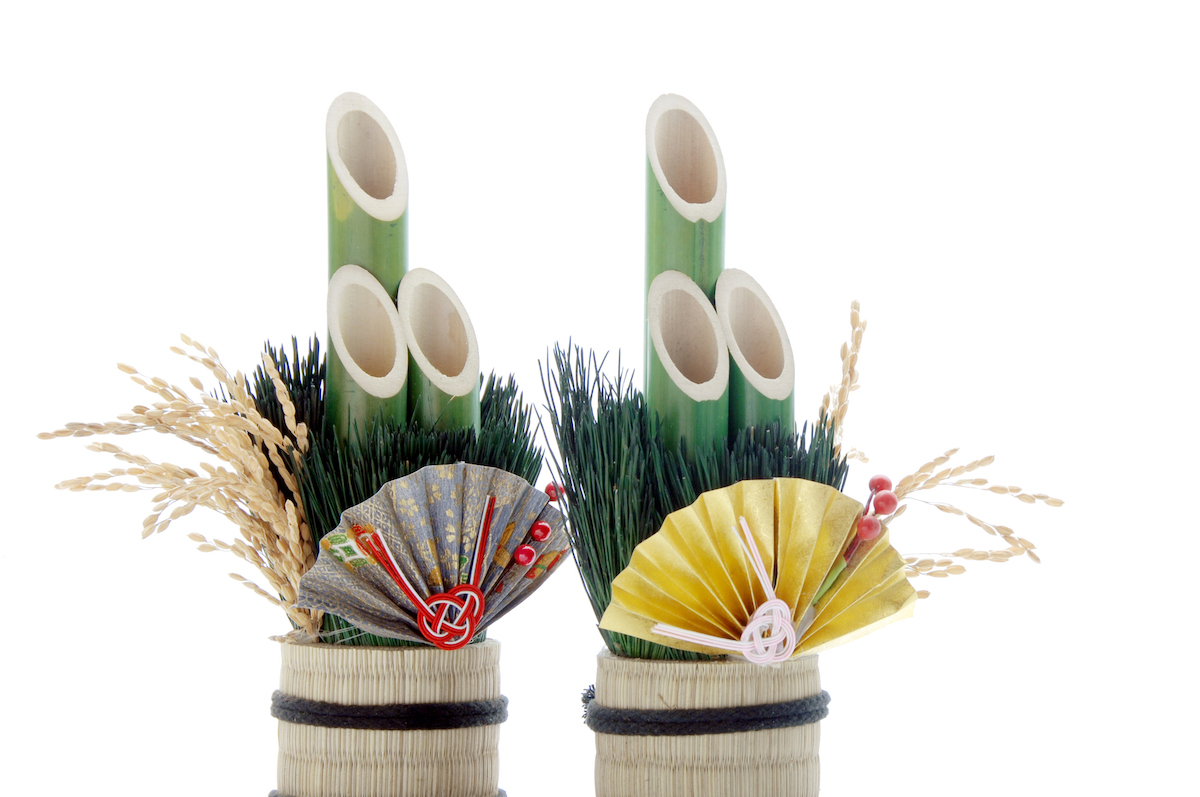 A “kadomatsu” is another decoration that’s traditionally used to welcome luck and divine spirits. Kadomatsu can be spotted in pairs, as one is meant to represent male and the other, female. They’re made from three bamboo poles and are oftentimes decorated with paper fans, flowers and sprigs of plants like pine.

In Shintoism, gods and other divine spirits are believed to reside in trees. This belief is combined with the symbolism of strength, represented by the sturdiness of bamboo, and vitality, represented by the evergreen nature of pine trees — both of which are characteristics that Japanese people hope to be bestowed with for the New Year. 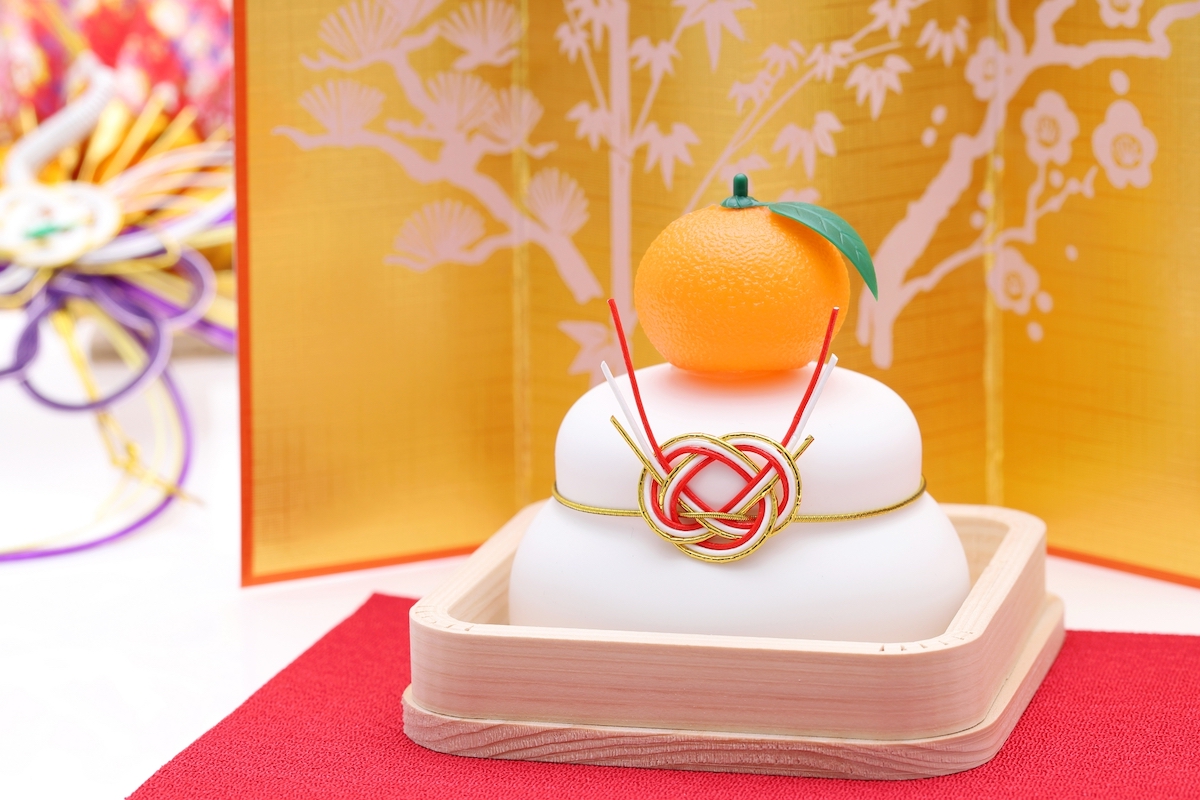 Last but not the least is the “kagami mochi” (鏡餅). It’s essentially two differently sized mochis, or rice cakes, stacked on top of each other, with the bigger one going on the bottom. At the very top sits a daidai, or a Japanese bitter orange.

Although the ‘kagami’ portion of the name translates to ‘mirror’, there aren’t actually any mirrors in this edible decoration. This name was supposedly taken from the shape of olden mirrors in Japan.

The two pieces of mochi are meant to symbolize the past year and the coming year, and the daidai represents longevity because this fruit is said to stay on the tree it grows from for up to 2-3 years without ever falling. Every January 11th is the day of “kagami biraki”, which translates as the day when you can “break open the mirror”; families in Japan typically break the kagami mochi into pieces to share with each other. 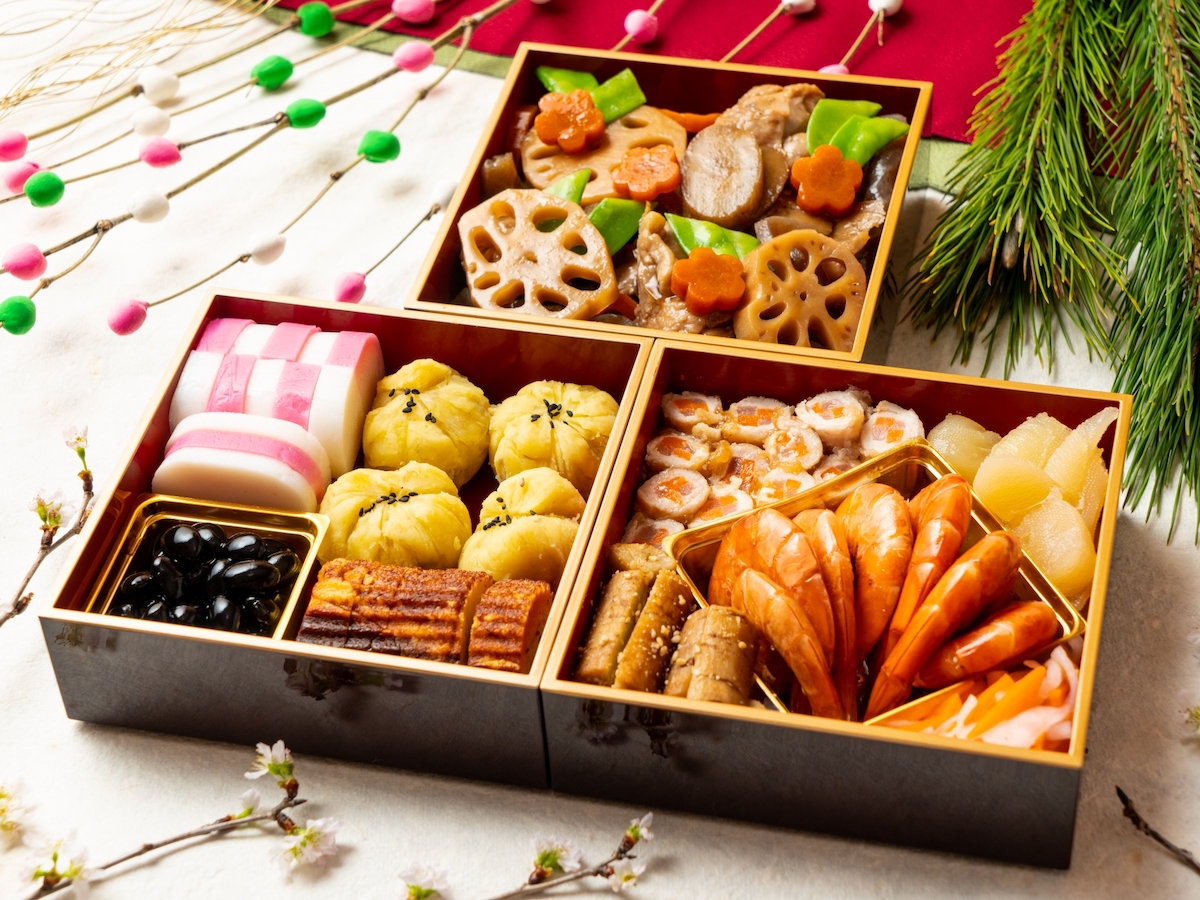 Speaking of food, no matter where you are in the world, a New Year’s celebration isn’t complete without it, and Japan has their fair share of unique celebratory dishes.

On New Year’s Eve, it’s customary to eat soba, which when eaten during this day, is also known as “toshikoshi soba” or year-end soba. This tradition became common in Japan during the 19th century. Soba noodles can easily be bitten or cut when they’re being eaten, and so eating them is supposed to represent a clean break from the past year in order to move on to the new one.

While soba is typically eaten on New Year’s Eve, there’s a different type of food for the first day of the year, and it’s a pretty lavish dish in and of itself: the osechi (お節). Osechi isn’t a specific type of dish per se, but is instead a smorgasbord of different food items — all of which have individual symbolisms — that come neatly packed together in bento-style boxes.

Some of the food items that make an appearance include black beans representing health, shrimp representing longevity, and kamaboko, a type of broiled fish cake that’s served in slices of red and white, representing the Japanese flag’s colors.

After reading about all the different New Year’s traditions in Japan, it’s easy to see that although the way they celebrate might not be as lively or cheerful as everywhere else, each tradition is imbued with deep meaning and is all about the hopefulness that they wish to carry over to the year ahead.