Summary: The heat during a Japanese summer can sometimes be unbearable but thankfully, there are plenty of summer foods to eat. In this article, we take a look at some summer foods that are guaranteed to help you beat the heat.

Summers in Japan can be brutal, even if you’re someone who normally doesn’t mind hot weather. The combination of heat and humidity can sometimes make any time spent outside feel like being in a sauna. That said, there are plenty of great things about Japan in summer. There are plenty of festivals and events on during the season and of course, there are plenty of summer specific foods to eat. Let’s take a look at some of the best ones to cool you down on those extra hot days. 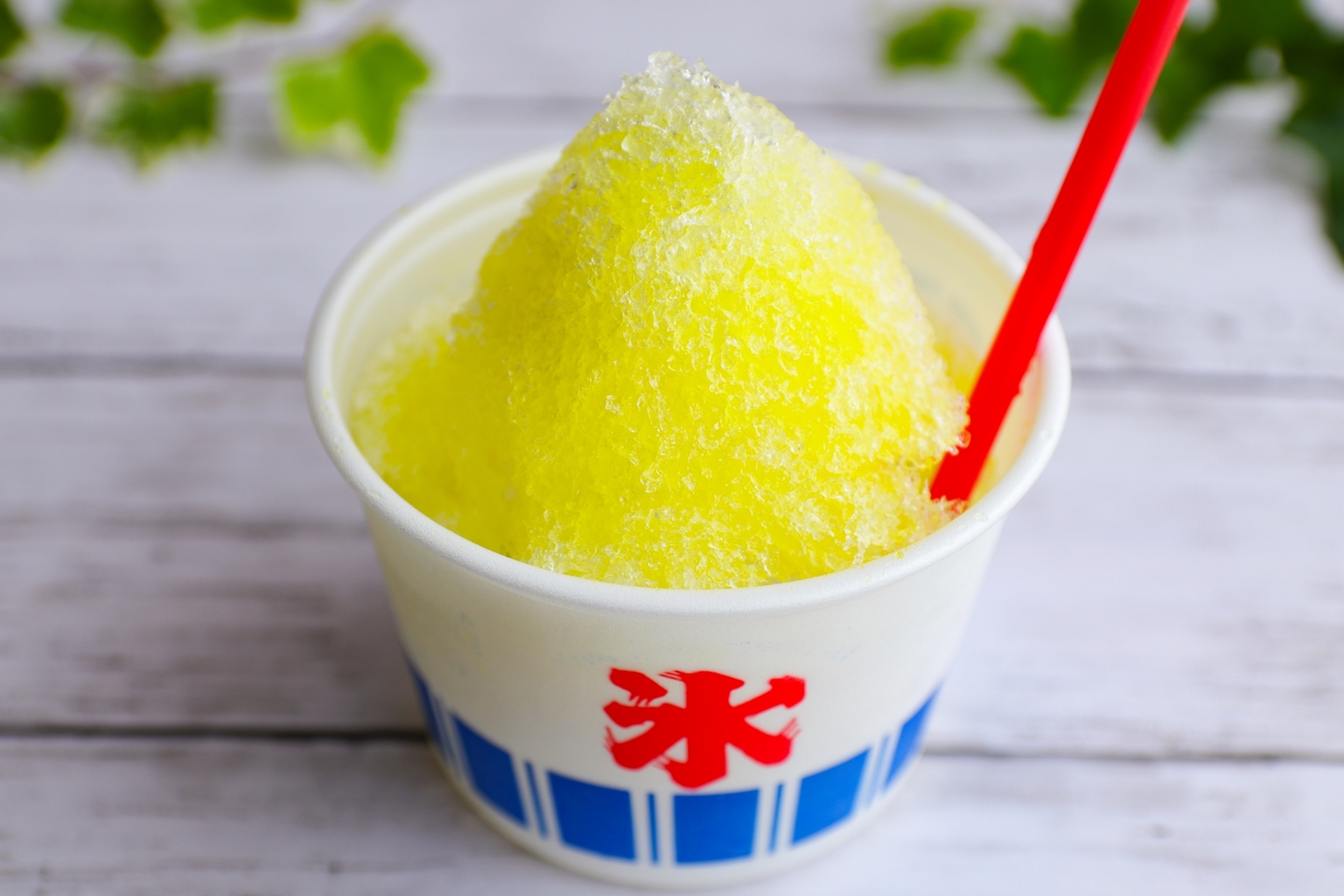 A Japanese summer wouldn’t be complete without kakigori, shaved ice drowned in the flavoured syrup of your choice. Kakigori is just the thing for a super-hot day and kakigori stands pop up everywhere in summer with flavours including strawberry, lemon, green tea, melon and grape. Lighter than ice cream and with just the right amount of sweetness, its surprisingly delicious. A favourite of mine is a variation originating from Kagoshima called shirokuma which is made with condensed milk, fruit and sweet azuki beans. 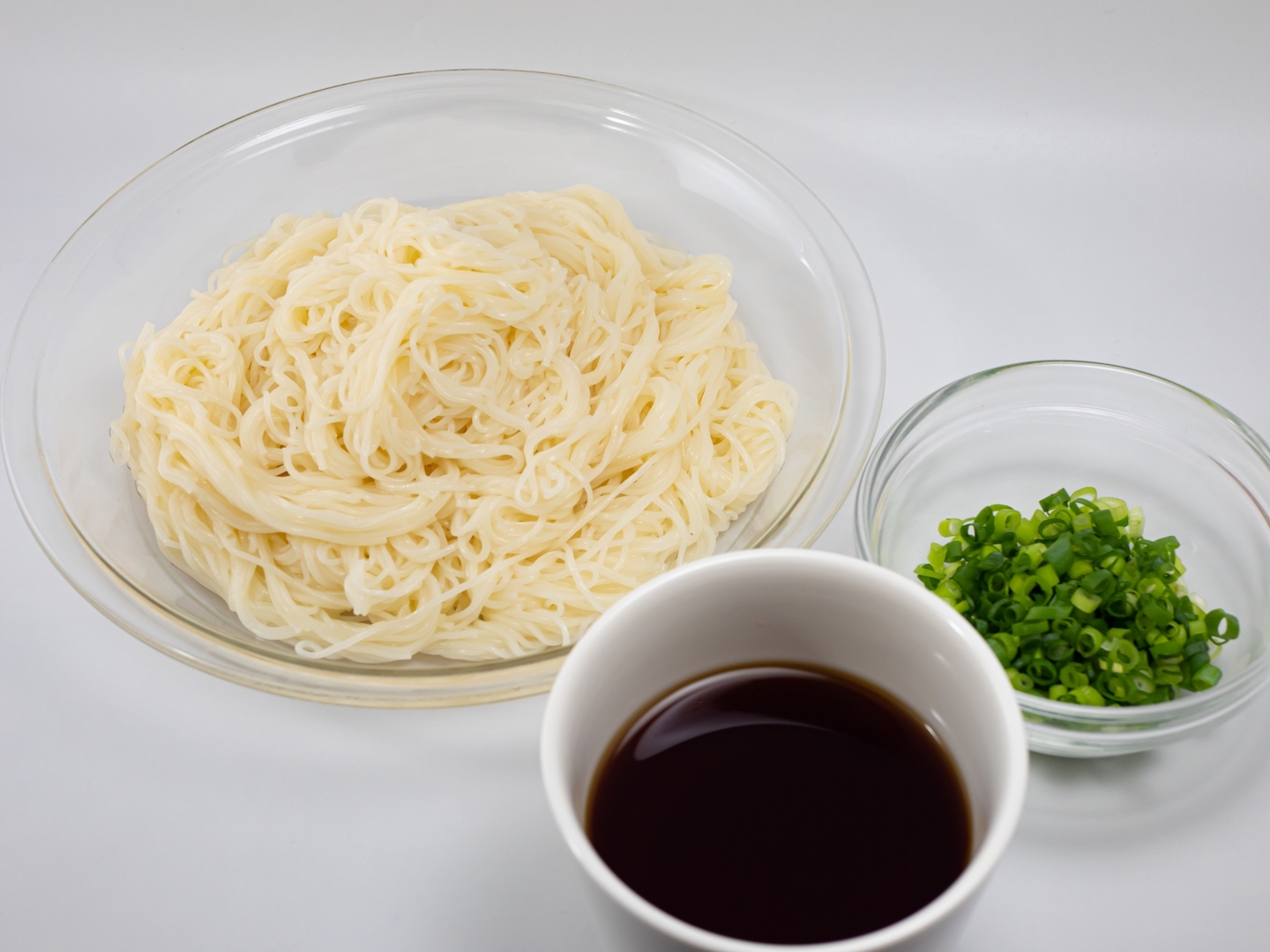 Somen is a kind of thin noodle made from wheat and often eaten in summer. Somen is usually eaten cold, sometimes chilled with ice, alongside a small bowl of dipping sauce garnished with ginger and scallions. You dip each mouthful of noodles into the sauce as you eat it and it’s refreshing and filling in just the perfect way that won’t leave you feeling too bloated afterwards. 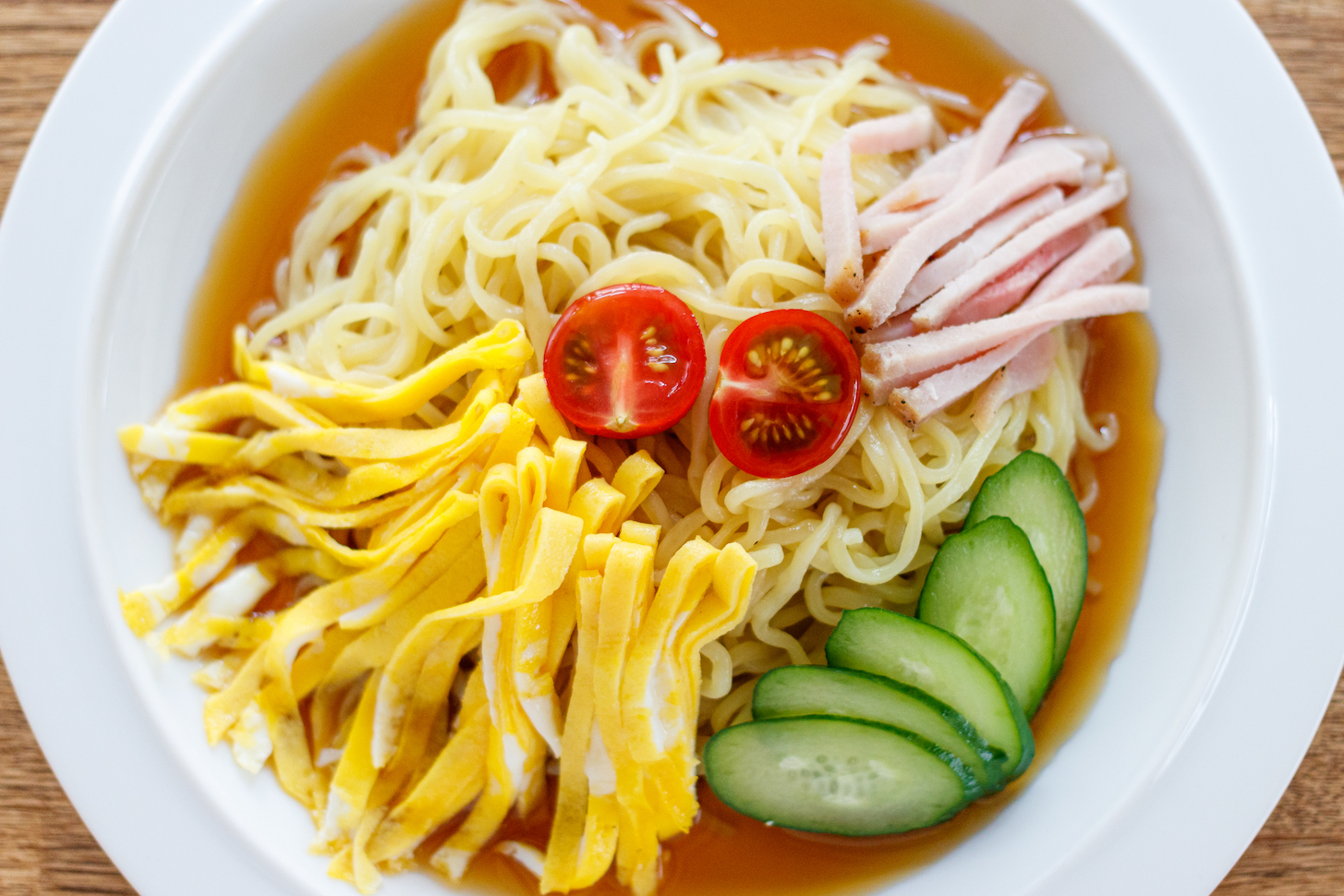 Hiyashi Chuka is sometimes referred to in the as cold ramen and it’s easy to see why. Another noodle dish, Hiyashi Chuka is made up of a variety of ingredients arranged and served on a plate and dressed heavily with a light, fragrant sauce. The arrangement of the dish is slightly reminiscent of a bowl of ramen without the soup and it’s great for cooling down in summer. It’s very common to see Hiyashi Chuka kits appearing in supermarkets just in time for the summer season. 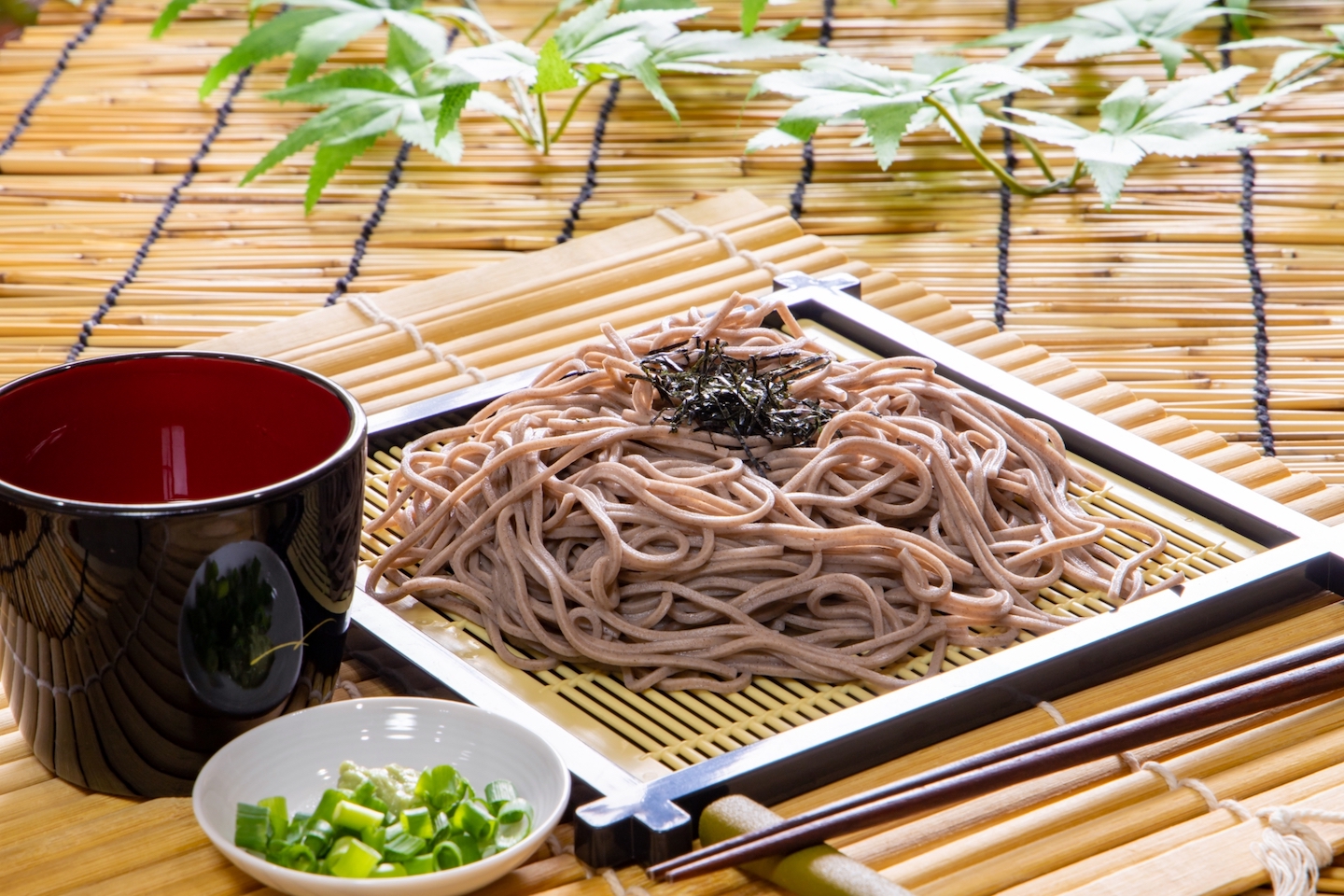 Soba is delicious any way you have it but served cold in summer, it’s the perfect way to cool down after a long day out in the sun. Zaru Soba is available throughout the entire year but it’s perfect for hot days. It’s served in a way very similar to somen noodles, on a tray with a dipping sauce on the side. As soba is made from buckwheat flour, the taste is entirely different from somen but just as delicious. 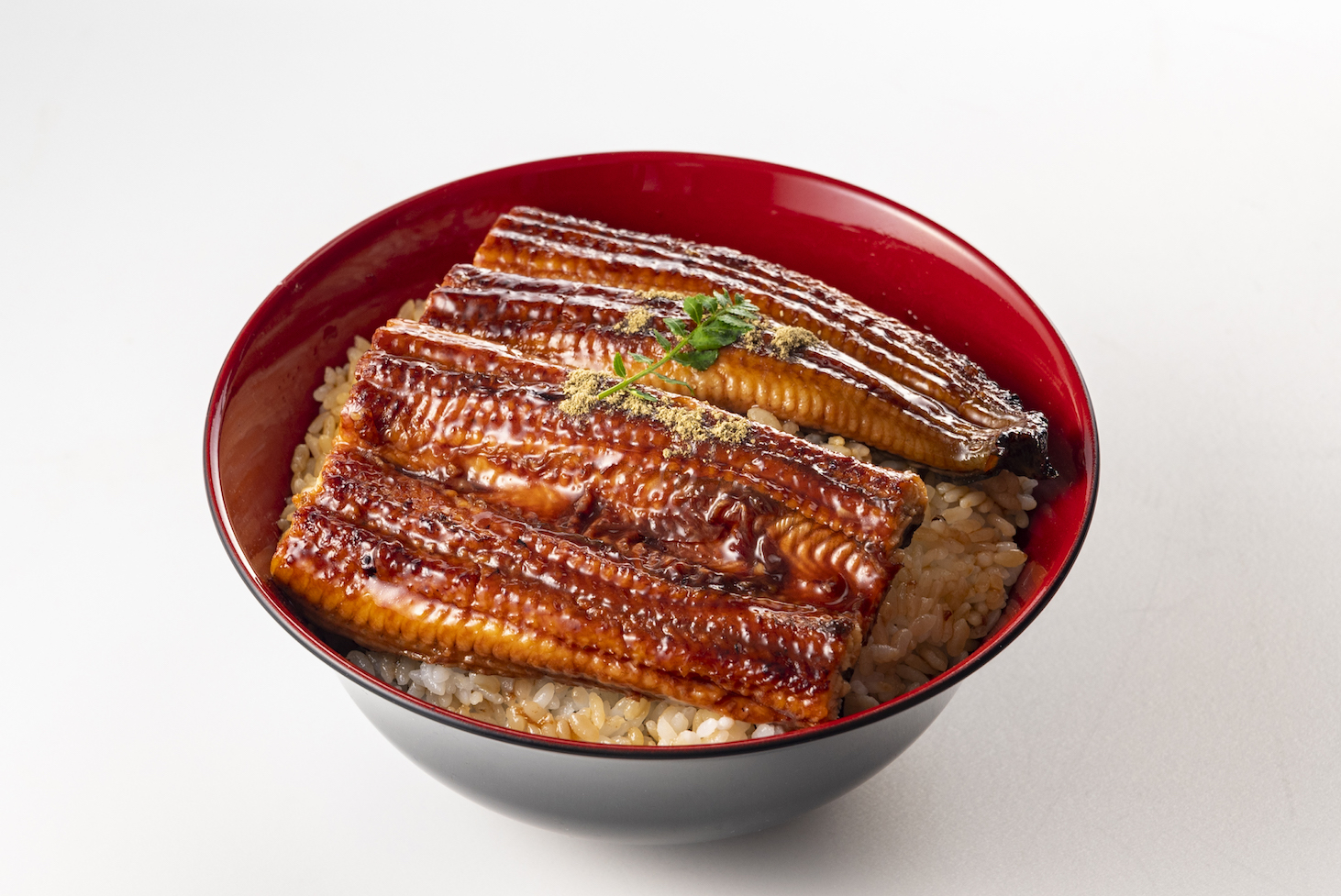 Unagi isn’t the kind of dish you would imagine would be placed here given that it’s usually served hot, but unagi is very much a summer food in Japan where it’s especially popular to eat it towards the end of summer. There are many reasons as to why this is, but the most popular saying among Japanese people is that eel contains qualities that helps to cool the body down during summer. This isn’t exactly correct as the origins of this tradition are far more complicated and to do with some clever marketing during the Edo period. Aside from this though, unagi is filled with vitamins and nutrients and because of this, it’s bound to help you combat that typical summer sluggishness. 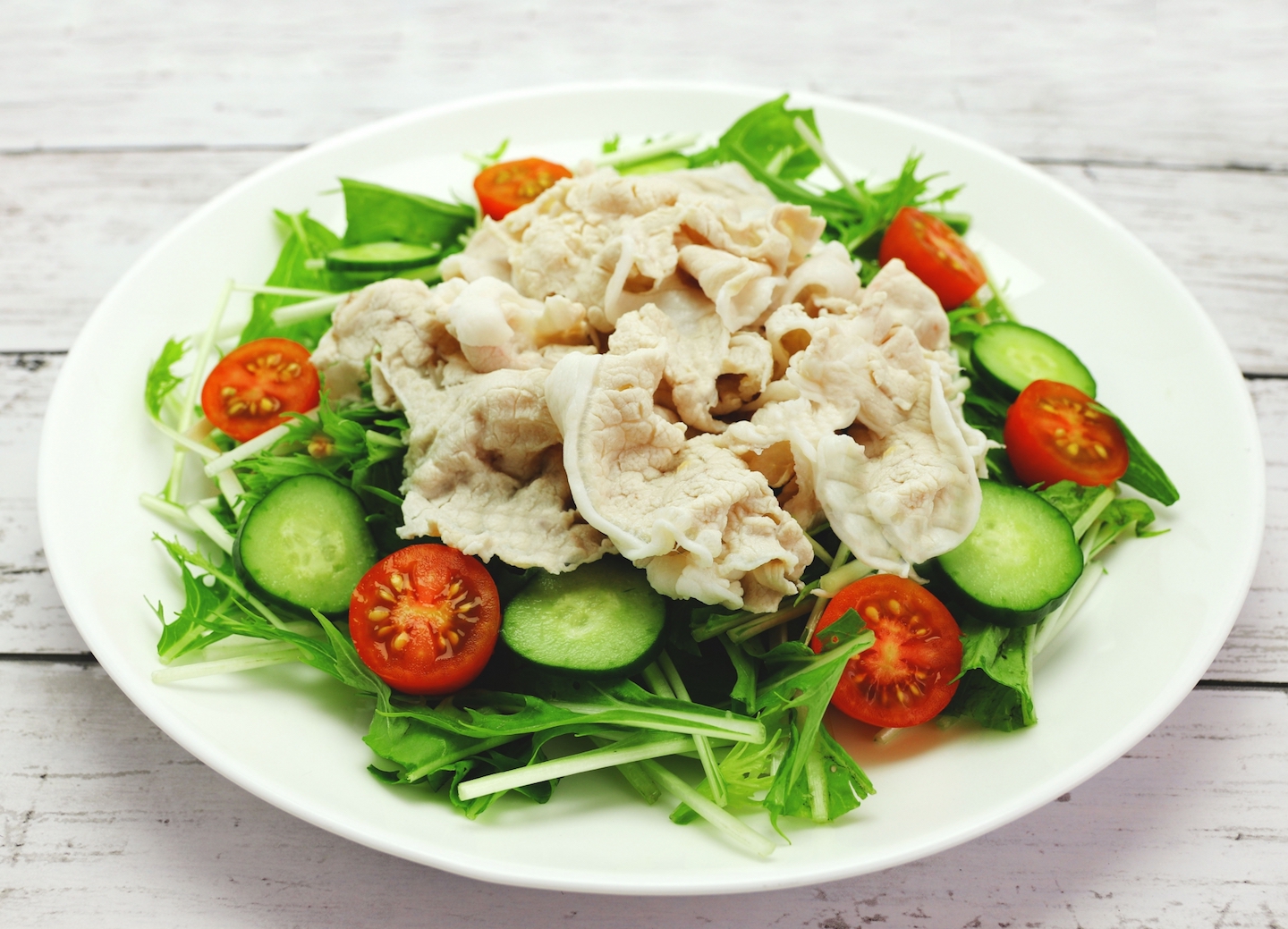 Shabu shabu is a dish made by cooking thin strips of meat in boiled water. Rei shabu is basically the cold version of that same dish. This is kind of like a pork salad dressed with ponzu and its one of my personal summer favourites. It’s super easy to prepare, light and flavoursome. It’s a great dish to prepare on the lazy summer evenings where you don’t want to spend too much time in the kitchen.

Yes, watermelon isn’t specifically Japanese at all but it is very much considered a summer food in Japan as it’s the only time it’s available for a reasonable price. It’s seen as the quintessential summer fruit. Chilled watermelon is a great way to cool down and a perfect food to eat in summer. 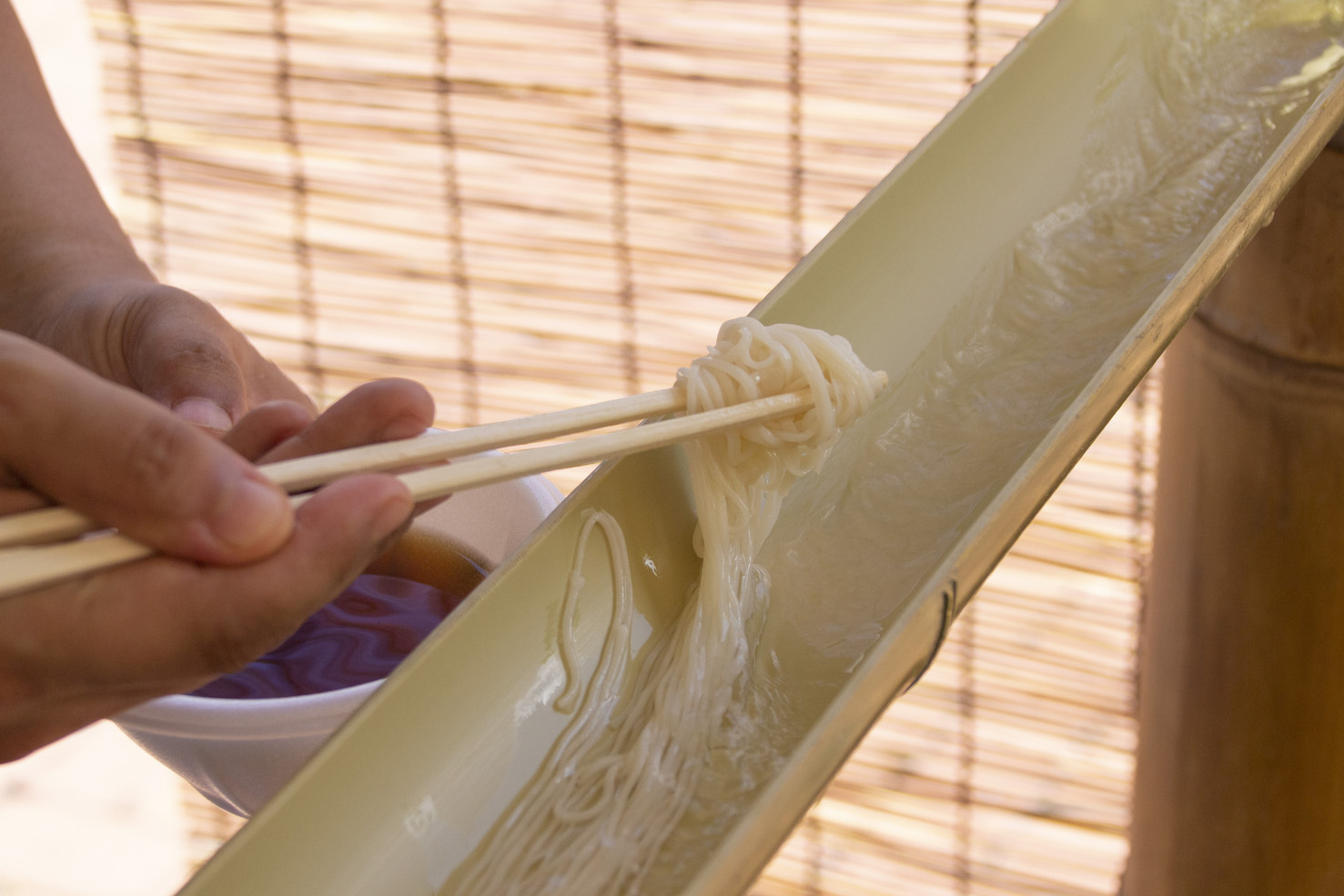 We’ve already mentioned somen before but this is another popular and unusual way of eating them that really takes off in summer. It’s one thing to eat your somen noodles, but what if you have to catch them first? This is the question that nagashi somen poses. Translated roughly as flowing noodles, nagashi somen is usually eaten in a restaurant where noodles are placed in a small bamboo canal running with ice cold water and sent rushing downstream to where the diner tries to fish them out of the water using their chopsticks. The somen is then eaten in the usual way with dipping sauce until the next batch comes flowing down the makeshift stream. It’s an interesting and fun way to eat summer that has become popular to the point where it’s possible to buy your own at home nagashi somen kits in stores.

So now we’ve looked at some of the foods that are eaten in summer in Japan. If you’ve never encountered some of these before, with the summer heat in full swing now, it’s the perfect time to give these a try. They’re guaranteed to make you feel cooler and refreshed on even the hottest days.