How to spend Christmas in Japan

Christmas trees, poinsettias, and Santa Clauses have popped up all over Tokyo in stores and public areas, but what does Christmas really mean in Japan?

While most Japanese in their 50’s and older are quite familiar with the story of the first Christmas and what makes it so special to people in the West, if you talk with the younger crowd, you’ll see it’s a little more hit and miss. A street interview by a vibrant church in Tokyo revealed some funny answers to Christmas trivia questions. For example, Christmas is Santa’s reindeer’s birthday, Jesus was born in Los Angeles, and Jesus was born in the 60’s.

In Japan, Christmas is not a national holiday, but thanks to former Emperor Emeritus Akihito’s birthday being celebrated on December 23, Christmas is sometimes included in school and other year-end holidays. Rather than being a religious holiday, Christmas is viewed by most Japanese as simply a special day for couples, similar to Valentine’s Day, and for families with young children.

Interesting Fact: While in the West, “Merry Christmas” has been replaced with “Seasons Greetings” and “Happy Holidays” for secular celebrations, Japan (whose Christian population is just under two percent), predominately uses “Merry Christmas.”

How Is Christmas Celebrated In Japan?

If you go out anywhere during the month of December, you will likely see advertisements for “Christmas chicken.” Most Japanese are unaware that roast hams and sometimes turkeys are more common for Western Christmas dinners. What all expats want to know is, where did Christmas chicken come from?

Japanese Christmas, like secular Western Christmas, is highly influenced by commercial advertising. Christmas chicken is the result of one highly effective advertising campaign by the manager of the first-ever KFC (known by the nickname ‘Kentucky”) in Japan. Since that ad campaign in the 70’s, “Christmas Chicken” has become a Christmas tradition in Japan. Whether or not it’s because of his resemblance to Santa Claus, the Col Sanders figures outside KFC’s usually don a Santa hat when holiday season approaches.

“Christmas chicken” is available from KFC, grocery stores, and convenience stores, but if you don’t put in a reservation early, you might be eating onigiri for dinner instead! My neighborhood kombini started their Christmas chicken booking service as early as September 19th! If, on the other hand, you want to try a truly “Japanese style” Christmas, look for a “Christmas sushi set.”

When you hear the term “Christmas cake,” you may imagine heavy, spiced cake speckled with dried fruits and sometimes infused with alcohol over a long period of time, made by a grandmother or aunt and disliked by the younger family members. However, Japanese “Christmas cake” is something entirely different.

Christmas cake in Japan is a layered sponge cake with sliced strawberries and cream in the middle and whole strawberries on top. (The history of the “shortcake” and the metamorphosis from a heavy, buttery biscuit to a light and fluffy sponge cake is incredibly fascinating, but that will have to be for another post)

The tradition of Christmas cakes in Japan is also thanks to commercial advertising. In 1922, the cake shop, Fujiya (whose mascot is Pekochan, the girl with pigtails, and the tip of her tongue sticking out of her mouth) used the slogan “クリスマスにケーキを食べましょう,” meaning, “Let’s eat cake for Christmas!” Like with KFC, it seems to have stuck. 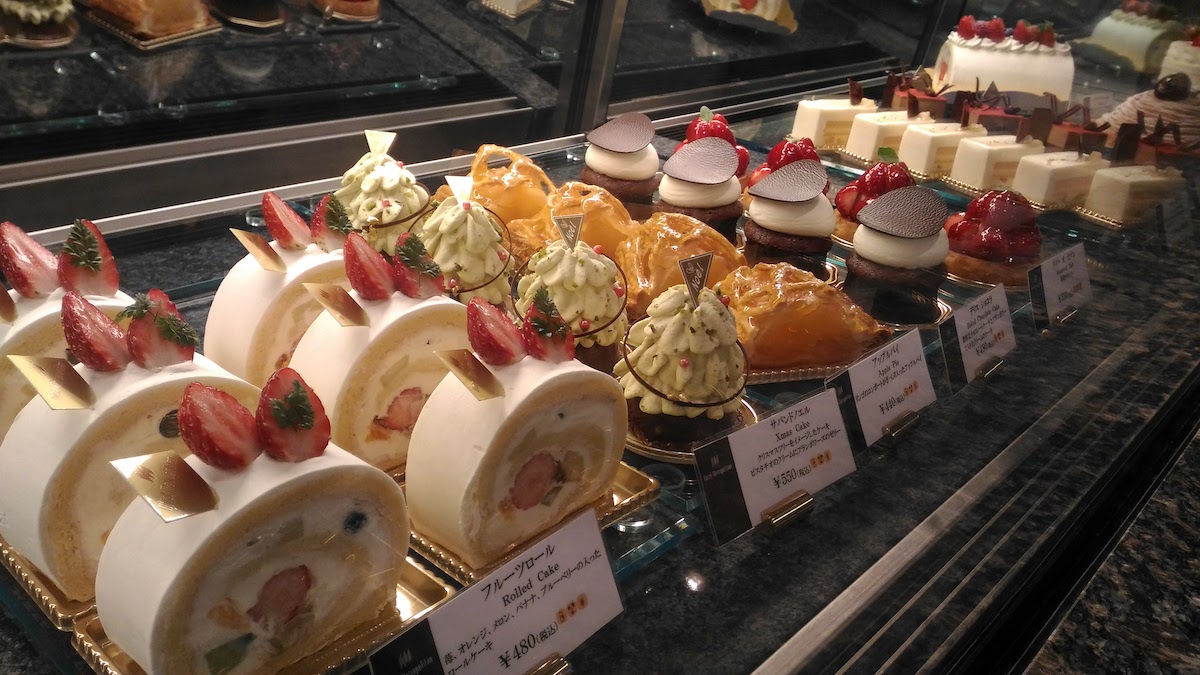 Colonel Sanders aside, Santa does make his rounds to Japan! Here he is called “Santa” (サンタ), “Santa-san” (サンタさん),or Santa Claus (サンタクロース), and in Japan as in the West, he gets all the credit for bringing presents to children. Almost like a winter Where’s Waldo (Wallie for the Brits!), Santa appears just about everywhere you look during the Christmas season: on Christmas merchandise, Christmas decorations, on Christmas cakes and Christmas cards, as well as in the form of cosplay costumes. Unlike some of the modern new Western takes on Santa, Japanese Santa-san tends to be rendered as quite a “kawaii” 可愛い (かわいい) character, which I personally like!

Interestingly enough, Japan has its own Santa-like figure in Japan is Hotei 布袋 (ほてい), the god of contentment and happiness. His name means “cloth bag,” because he carries around a sack full of food and drink. He is one of the “Shichifukujin” 七福神 (しちふくじん), the seven gods of fortune. He is known as the fat and happy Buddha, but scarily enough, he is said to have eyes on the back of his head, which are particularly useful for keeping track of who has been naughty and who has been nice!

Christmas presents are generally only given to young children or exchanged between dating couples. If you have seen the season of Terrace House called Aloha State, which takes place in Hawaii, you might remember the Christmas Eve scene in which Yuya and Avian go out on a special date. They really seem to be hitting it off, until the moment comes when Avian gives Yuya his Christmas present, only to find out that–not only did Yuya not bring one for her, but it had not occurred to him to buy one for her! Shock! Otherwise, adults do not generally exchange gifts for Christmas, but rather for “oseibo” お歳暮 (おせいぼ) a traditional thank you gift given in the fall.

Illuminations, Markets, and Disneyland–Christmas In The City

Whatever your thoughts about Japanese Christmas, and regardless of whether you are dating, single, have children, or not, walking around town during the Christmas season in Tokyo is a really beautiful experience. Public illuminations, or lights displays, or particularly magical.

From the beginning of November you will see them strung up in public squares, along main avenues like Omotesando Dori, and covering entire parks with glittering LED lights, sometimes coordinated to music or narration.

If you are missing more traditional Western Christmas vibes, you can find European-style Christmas markets with mulled wine, sausages, charming Christmas crafts and decorations, and cakes. This year, too, with COVID-19 precautions in place, they plan to offer a full schedule of holiday events, including ice skating! Here are a few to mark your calendar for:

Another way Japanese families and young people like to spend their Christmases is at–of all places–Disneyland, for the Disney Christmas Fantasy! This is because of the special Christmas-themed entertainment, food, and merchandise and decorations. If you didn’t get a chance to visit because of the limited number of tickets available this summer due to the coronavirus, you might try again for this Christmas!

By the way, you might have heard the phrase “instabae” インスタ映え and wonderd what it meant. Basically it means that something is photogenic, or worthy of snapping and posting on Instagram! The Christmas season in Tokyo is definitely インスタ映え!

You might be curious whether there are any Japanese original Christmas songs, and there are a ton! Here are a few of the top picks according to karaoke room stats:

As charming and gorgeous as the Japanese Christmas is with all its Santas and illuminations and Christmas markets, if it’s a real, traditional church Christmas you are looking for, you might have a hard time finding open doors this year, because of the COVID-19 restrictions. However, many churches have moved to online. Lifehouse Tokyo, a large international church with campuses all over Japan and the world, has bilingual services. Their tech-savvy team are preparing Christmas events throughout the month of December.
Where: Online (Lifehouse International Church – Tokyo)
When: December 13th Christmas Story/December 20th Christmas Carols (check website or Instagram profile for updates)
Entry: Free