Halloween amongst the neon lights in Tokyo city

Halloween has become a massive hit in Tokyo in recent years. Halloween—sometimes along with Christmas—decorations and goodies can be found in some shops and department stores as early as September,…
By Tokyo Room Finder • October 23, 2018

Halloween has become a massive hit in Tokyo in recent years. Halloween—sometimes along with Christmas—decorations and goodies can be found in some shops and department stores as early as September, and there are now several celebrations around the city even before October 31st. Before Halloween became huge in Tokyo, the Kawasaki Halloween Parade was the event that came to mind when people mentioned Halloween. Now it’s got a lot of competition, but this event still never fails to draw huge crowds year after year. In fact, the event just got bigger, as it no longer just consists of a parade, but a series of activities in the days leading up to Halloween. 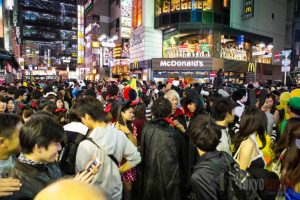 The main parade will be from 2:30-3:45 pm on Oct 28th, and it costs 1,000 yen to join. Better hurry and make up your mind, though, as they’re accepting a maximum of 2,500 participants. One of the categories for the parade is Pride-themed, so if you want to be a drag queen or celebrate your sexuality, you can sign up for that.

If you still have the energy to party after the parade, join the after-party from 5:00 pm-10:00 pm (free for Halloween parade participants; 1,000 yen for advanced tickets or costumed participants; 1,500 yen at the door). 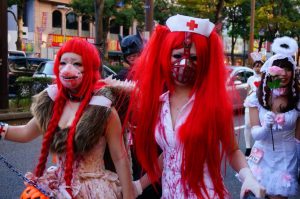 The day before, there will be some parades for kids at 12:00 pm, 1:30pm, and 3:00 pm—you can sign your kids up for 500 yen. Other activities, most of which will take place on the weekend of Oct. 27-28, include movie screenings and a Halloween makeup booth.