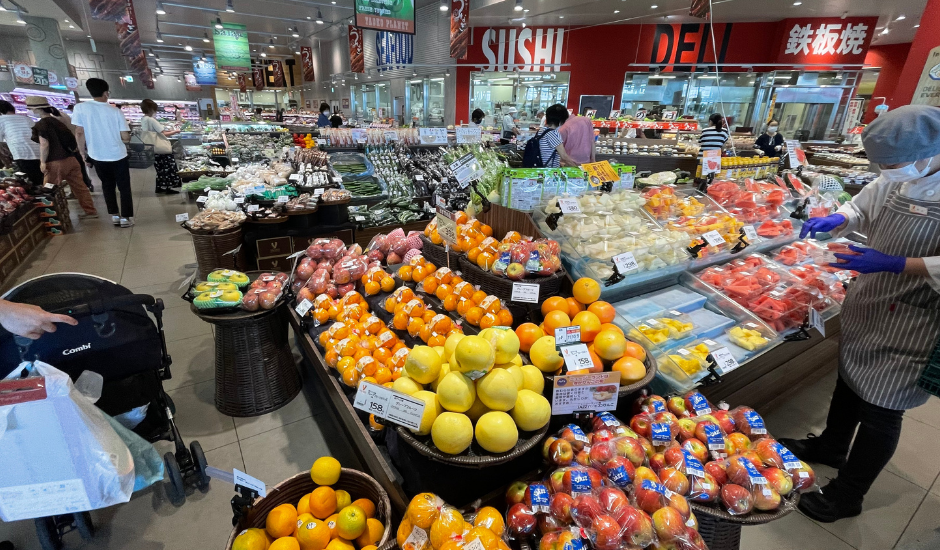 Oddly shaped, well-cushioned, and protected in fancy packaging – fruits in Japan can shock tourists because of their hefty price tags. But are they truly worth it? Let’s find out.

Why is fruit so expensive in Japan

There are multiple reasons that cause fruits in Japan to burn a hole through one’s pockets especially if purchased regularly. One is the high standards imposed by the Japanese Agriculture Cooperative (JA) which ensure that fruits on display are blemish-free and of top-notch quality. Any produce that doesn’t fit the bill is manufactured into another item before appearing on the shelves.

Having purchased countless watermelons, strawberries, melons, cherries, kiwis, and so on, I haven’t come across rotten, bruised, overripe (unless already in the marked down section), or disappointing fruit. Therefore, it’s safe to say that consumers are paying for quality fruits.

The next reason would be demand and supply, wherein the Japanese don’t consume much fruit, and farmlands in the country are quite limited. Fruits were considered a luxury in Japan before the 1980s, and they were only consumed for special occasions. According to the 2017 fruit consumption per capita data, Dominica takes first place with 381.7kg of fruits consumed per person annually, while Japan was at 29.74kg.

Then you have the small size of Japan, which isn’t made to grow fruits on a large scale. In fact, only about 12 percent of available land is used for agriculture. What’s more, these farmlands are handled by small-scale businesses or families that don’t have the means to produce fruits in tons every harvest. You add limited demand and supply, and you get high prices.

Is expensive fruit worth it?

This is perhaps a question you might have, especially if you’re planning on stocking up the fridge with fresh fruit for your smoothies, desserts, and side dishes. Do you really need to splurge on that ¥10,000 watermelon for a shake?

First, let’s differentiate the two general price categories of fruits: the more affordable (yet still expensive) and the super expensive, premium, luxury fruits. The first is grapes, strawberries, pineapples, apples, oranges, and other fruit you can have for everyday consumption. Depending on the store you go to, a pack of four oranges usually costs around ¥400.

You can also indulge in some expensive watermelons already cut into quarter slices or in ready-to-eat packaging, which cost between ¥400-700. A whole watermelon can range from ¥900 to ¥3,000 at a supermarket. A whole watermelon larger than the ones shown below in other tropical countries is around ¥900, so even the ones for daily consumption are quite expensive.

As mentioned earlier, you’re paying for the quality of fruits in Japan, so they are worth it if you prefer incorporating fresh fruits into your diet. You can also opt for mixed fruits already sliced and offered in single portions for convenience. These are also on the cheaper side than purchasing whole fruits. 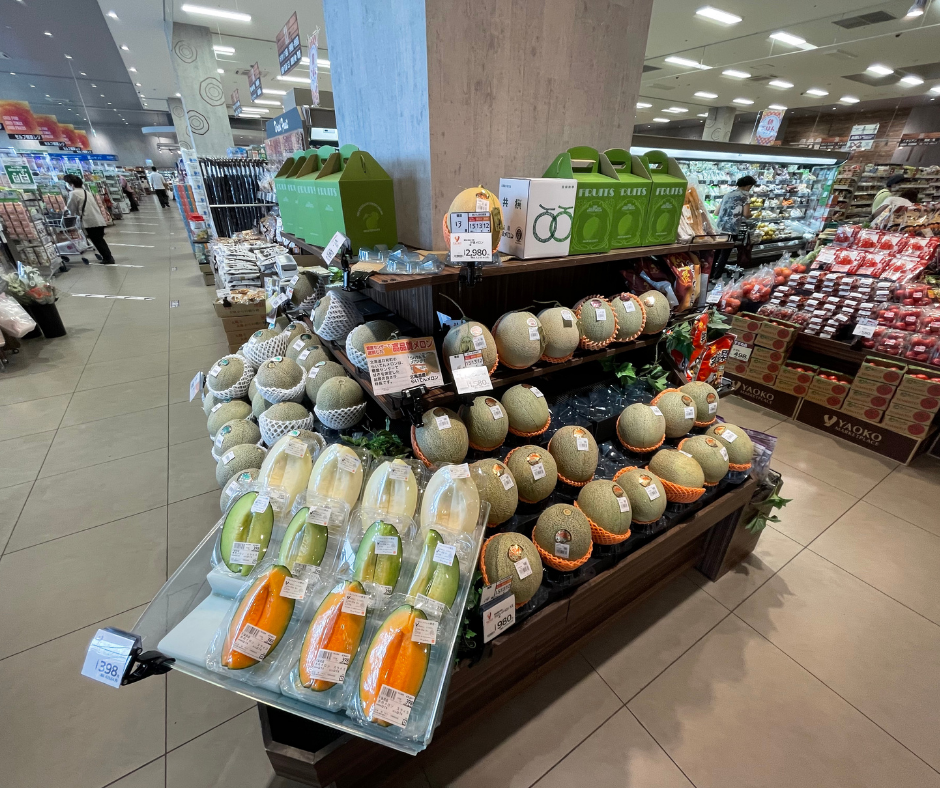 Then you have luxury fruits for gift-giving purposes. People know that these fruits are of premium quality and are packaged exquisitely for added value. Some of the fruits are cultivated for such purposes, hence the heart-shaped or square watermelons that cost around ¥10,000! These fruits are hard to miss because they’re separated from the other fruits, with extra care placed on their packaging. For example, premium strawberries are individually cushioned, while regular ones are just bunched together in a pack. You can also see signs posted beside these fruits that prohibit shoppers from poking or touching them.

Top 3 most expensive fruits in Japan

Let’s take a look at some of the most expensive fruits in Japan, both premium and for daily consumption, so you have an idea of which ones to budget extra for.

These two fruits take the top positions as the most expensive fruits in Japan. A luxury musk melon can go over ¥20,000, while a regular one doesn’t go lower than ¥1,000 for a whole melon. Whole watermelons for daily consumption range from ¥1,500 to over ¥3,000. Watermelon season in Japan is from May to August. 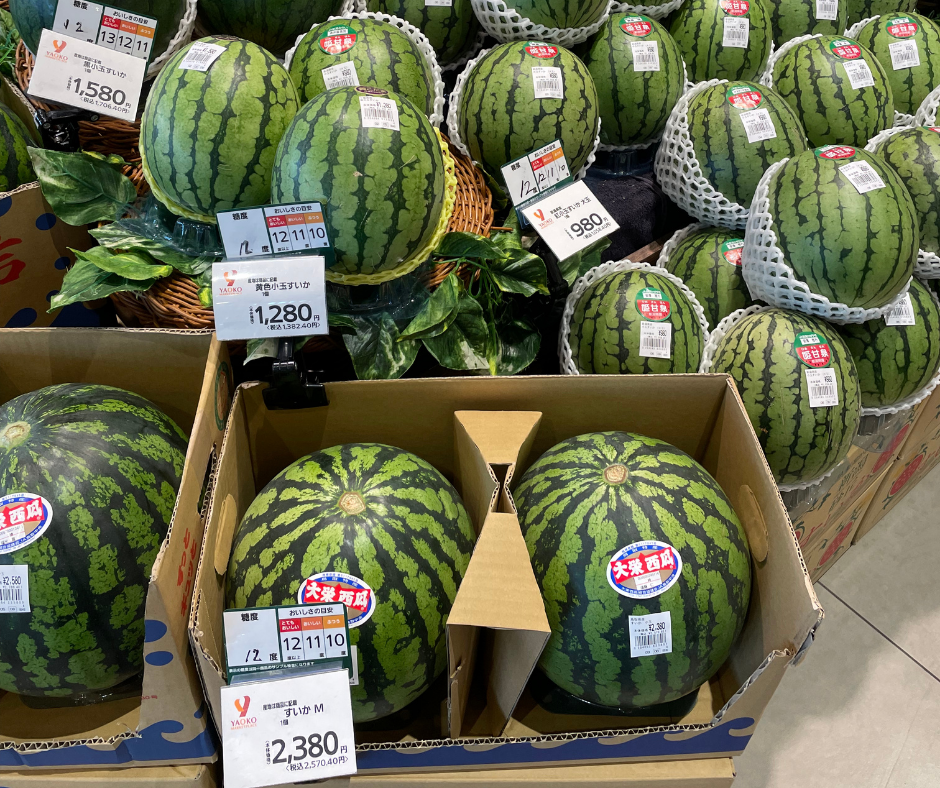 Come November, you’ll begin to see deep red strawberries taking center stage at grocery stores. Strawberries can be purchased for ¥1,000 a kilo, which isn’t so bad to add to one’s daily budget. If you’re buying it as a gift, the price can shoot up to ¥1,000 per piece for the white Hatsukoi no Kaori strawberries.

Did you know that Japan’s Ruby Roman grapes are not only expensive within the country but have a reputation for being one of the most expensive in the world? In 2020, one bunch of Ruby Roman grapes was sold at an auction for $12,000 (¥1.6 million). Imagine coughing up ¥54,000 per grape! Before reaching such prices, the grapes are scrutinized for their size, color, physical condition, and sugar content, among other qualifications. Of course, you can opt for regular grapes, which cost less than ¥1,000 for a bunch. 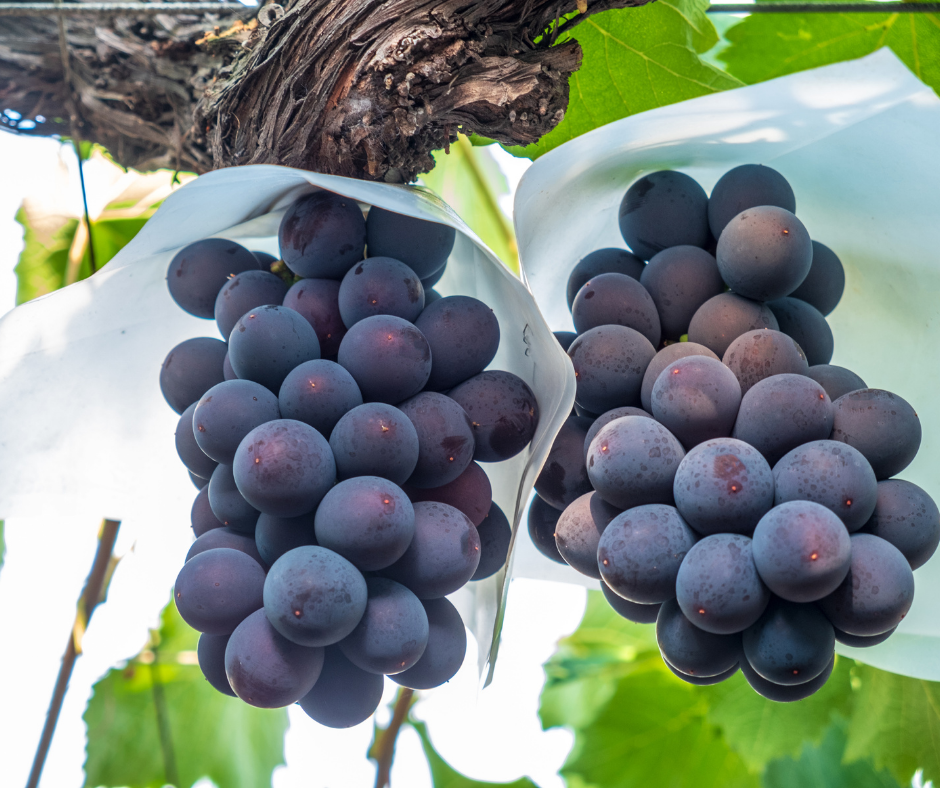 Where to get expensive fruits in Japan

If you’re looking for luxury fruits to give away during a special event, you can check out specialty fruit stores like Sembikiya, which has branches around Tokyo and Yokohama. High-end department stores and supermarkets like Ginza Mitsukoshi, Shinjuku Takashimaya, or Isetan Shinjuku also offer premium fruits packaged securely and ready to give as a present.

If you grew up in a tropical country like me where watermelons twice the size of those here cost less than ¥1,000, you might get discouraged from enjoying fresh and juicy fruits. However, with the proper knowledge of when, how, and where to get these fruits, you can still indulge in these delicacies because, let’s face it, nothing beats fresh fruits!