Just like the name suggests, the second national holiday in February is in celebration of the emperor’s birth, but who is he, and what does he do?

Japan is famous for having the world’s oldest hereditary empire, with an unbroken line of emperors going all the way back to 660 B.C. However, since 1945, the emperor has had no “governmental authority or state property” and is “subject to the people’s will, a symbol of the people’s unity.” (Quote: General MacArthur’s speech on the new constitution). His Majesty the Emperor Naruhito is the 126th Emperor of Japan. His father, His Majesty the Emperor Emeritus Akihito, abdicated the throne for health reasons in 2019 (the first emperor to do so since 1817), marking the end of the *Heisei Era and the beginning of the *Reiwa Era. This year, the national holiday, aptly named The Emperor’s Birthday, falls on Tuesday, February 23.

The History of The Emperor’s Birthday 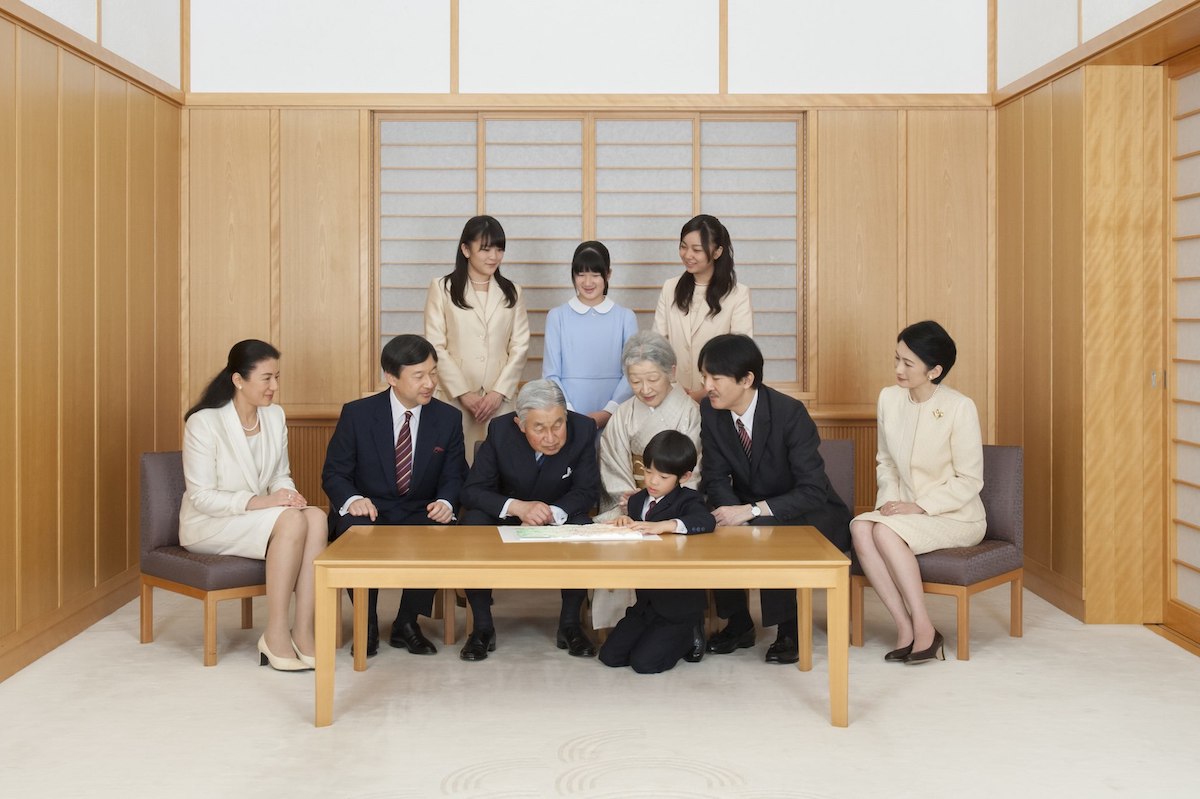 The Imperial Family in 2013

The Emperor’s Birthday is a fairly new holiday. It was established in 1948 during the *Showa Era. At that time it fell on April 29, which was Emperor Hirohito’s birthday. Upon his death, his son, Emperor Akihito, ascended the throne, and the holiday was moved to his birthday on December 23, giving the Japanese a day off right around Christmas, though Christmas Eve and Christmas Day are not national holidays. In 2020, rather than celebrating Emperor Naruhito’s birthday on February 23rd, which was a Sunday, the holiday was moved to the 24th to allow citizens to take the day off. Finally, from this year, 2021, everyone can celebrate on the actual date of his birth.

Note: Showa 昭和, Heisei 平成, and Reiwa 令和 are part of the traditional Japanese calendar system called “Gengou” 元号 and correspond to the reigns of the various emperors. Gengou is still used on official documents, with era names being shortened to 昭, 平, and 令.

How Is The Emperor’s Birthday Celebrated?

The Imperial Family gathered before the public in 2005.

The Emperor’s Birthday and New Year’s Day are the two occasions on which the public get to see the Imperial Family in real life at their residence, the Imperial Palace or “Koukyo” 皇居. The special events of the day include three scheduled appearances by the Imperial Family, the Emperor’s speech, and the signing of the guest book. This year, unfortunately, these events have been cancelled. Normally, the day begins with flocks of visitors arriving at the Imperial Palace, entering through the Nijubashi Gate 二重橋, and passing through security. There, they are handed little Japanese flags and proceed to the Kyuden East Plaza 宮殿東庭 in front of the beautiful Chowaden Reception Hall 長和殿, an impressive 163-meter wide structure outfitted with a bullet-proof glass front. There, they wait until the Emperor, Empress, and other members of the Imperial Family appear together on the balcony and greet them with shouts of “Tenno heika banzai” 天皇陛下万歳 or “Long live the Emperor!” and wave their flags with all their might. The Emperor gives a short speech, is cheered again, and retires for a state luncheon and reception. In the afternoon, people may sign the Greeting Book in front of the Imperial Household Agency. The book with its greetings is afterwards delivered to the Emperor himself.

Did You Know? In 2018, more than 82,000 people came to celebrate Emperor Emeritus Akihito’s birthday. 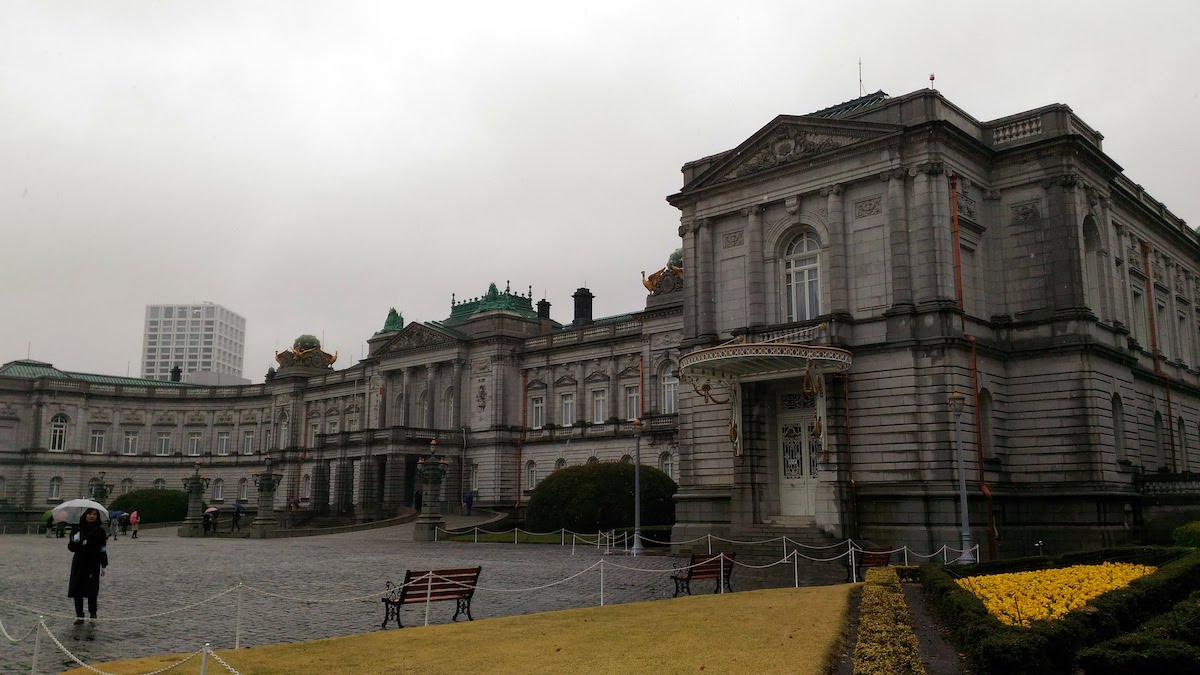 The Emperor, Empress, and the Princess do not live at the Imperial Palace in Chiyoda Ward, where the birthday celebrations are held. In fact, they live at the Akasaka Imperial Residence or “Akasaka Gosho” 赤坂御所, also known as the Akasaka State Guest House “Akasaka Geihinkan” 赤坂迎賓館, located in Minato-ku. The Imperial Residence is used to host dignitaries and was open to the public for touring; however, under the national state of emergency, it has been closed indefinitely. 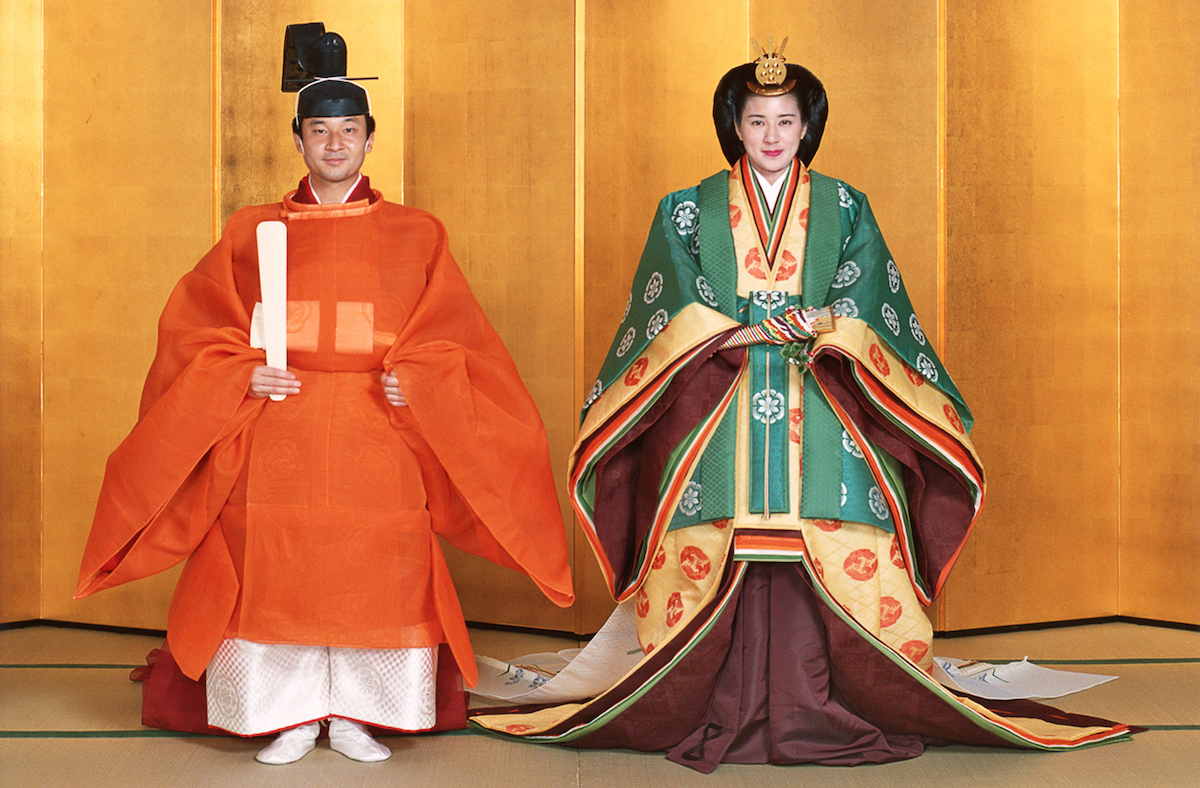 The Crown Prince and Princess in their formal wedding clothes.

As a young man, the Crown Prince Naruhito enjoyed relative freedom. He had the chance to pursue his education both at home and abroad, earning his Bachelor of Letters in history and a Master’s in humanities at Japan’s prestigious Gakushuin University, as well as spending two years at the University of Oxford studying the history of transportation on the Thames River. In 1986, at a tea party, he met his future wife, a bright young diplomat named Masako Owada, and in 1991 he was named Crown Prince.

Masako Owada was a commoner by birth, but she was anything but common. Born in Japan, she spent her early childhood years first in Moscow and then in New York City, where she later returned for high school. She was educated at Harvard University, Tokyo University, Grenoble Alpes University, and the University of Oxford. Masako was one among a mere 28 out of 800 individuals to pass Japan’s Ministry of Foreign Affairs entrance exam. Thanks to her education and upbringing, she became fluent in six languages: Japanese, English, French, German, Russian, and Spanish.

The Crown Prince arranged to meet Masako several times after the tea party, but due to life circumstances they spent much of the next five years apart, during which a list of potential brides was drawn up for him. However, his love did not diminish, and after being refused by her twice, the Crown Prince proposed a third time, and he and Masako were engaged. Many challenges awaited his bride-to-be, but it is said that he promised her, “I will protect you my entire life.” In 1993 they were married.

The Line of Succession 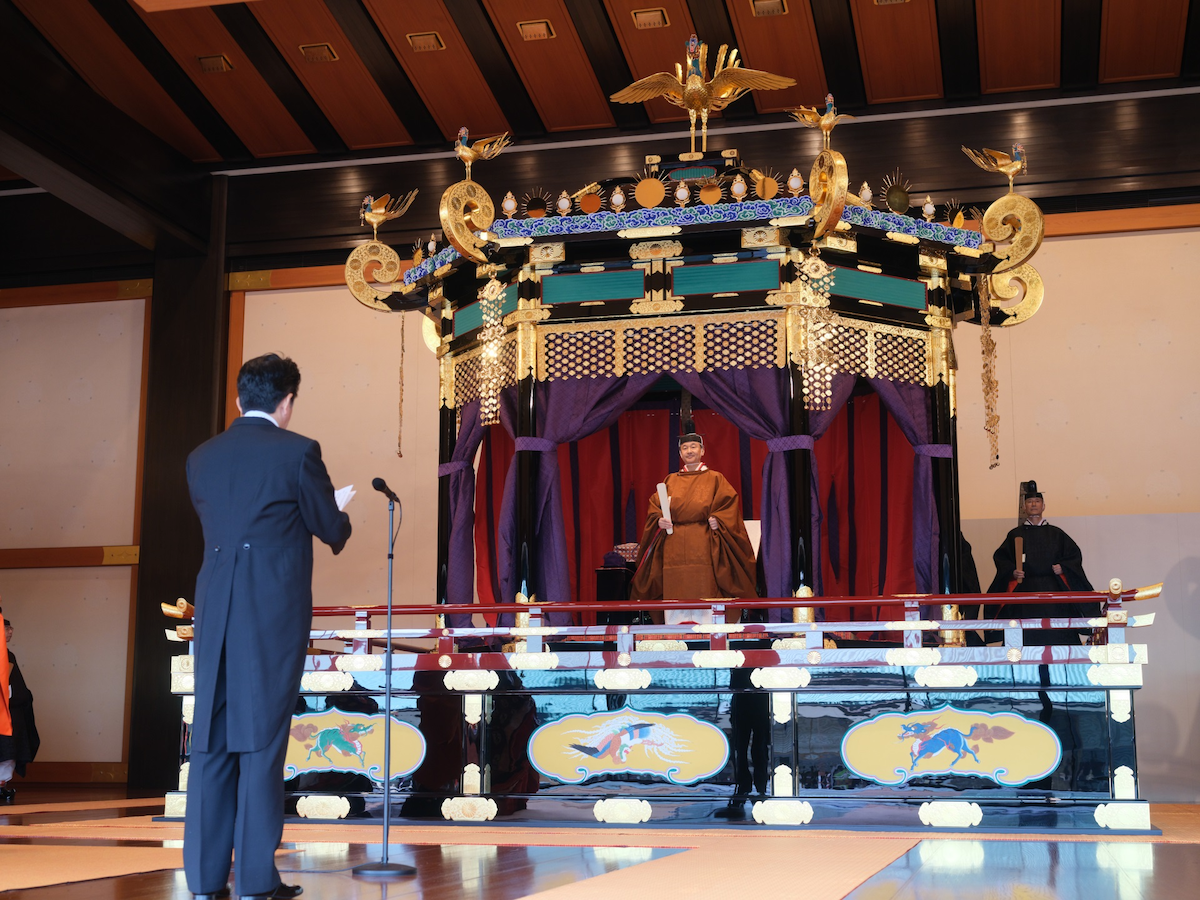 Despite her husband’s protection and her excellent educational and professional preparations, Crown Princess Masako met great difficulty in adjusting to Imperial life. It is said Imperial officials pressured her to fit in the Imperial mould, and like the queens of old, she was expected, above all, to produce an heir. In 2001, she did give birth to a child, Princess Aiko. However, Princess Aiko could not become the Imperial Heir. According to the Japanese Constitution, only “male descendants in the male line of Imperial Lineage” may succeed the throne. Motions have been made to amend the Constitution, but as of yet, none have been successful. In 2006, Empress Masako was relieved of her duty when Princess Kiko, her sister-in-law, gave birth to a boy, Prince Hisahito. Japan breathed a sigh of relief and put the issue of female succession back on the shelf.

As for Crown Princess Masako, she stepped out of the spotlight after Princess Aiko’s birth in order to recuperate from what was diagnosed as “adjustment disorder,” a condition linked to depression. Princess Aiko is now 19 and set to begin her studies at Gakushuin University like her father, and is said to be a vital emotional support to her mother. Little by little, the (now Empress) Masako has resumed her place in public life. She courageously shared with the press her anxiety about fulfilling her duties as Empress. Yet, since assuming her role, she has won great admiration, thanks to her command of foreign languages. Without the need for an interpreter, she can converse fluently and directly with foreign heads of state and their spouses, fulfilling her former role as diplomat as well as Empress.

What Do They Do? The Emperor and Empress of Japan.

With all this to-do about Imperial heirs and Imperial duties, what is it exactly that the Emperor and Empress are expected to do?

Although he does not choose officials or pass laws himself, the Emperor oversees and approves everything from the appointment of the Prime Minister to Cabinet decisions. He awards honors for artistic and cultural achievement, meets and greets ambassadors, and performs court rituals and ceremonies. In addition, he cultivates rice in the Imperial rice paddies and serves as the Honorary President of the Tokyo Olympic and Paralympic games.

The Empress is less involved in the law-making process, but together with her husband, she attends special events around Tokyo, visits disaster areas and encourages victims and relief workers, donates to causes, hosts social functions for Japanese officials as well as foreign dignitaries and heads of state, and attends lectures. She is Honorary President of the Japan Red Cross Society, and carries on the tradition of raising silkworms at the Momijiyama Imperial Cocoonery. As if this were not enough, the Imperial couple also finds time to write traditional Japanese poetry called “waka,” 和歌 which they recite at the New Year’s Poetry Readings.

More About the Imperial Family 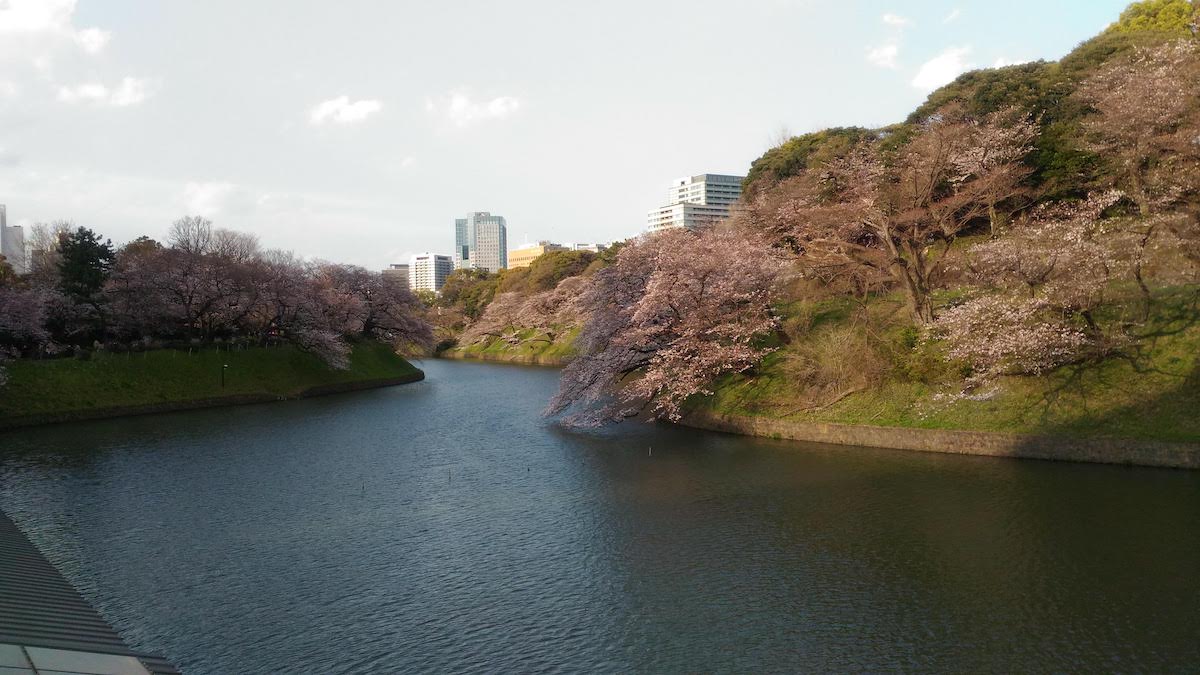 The Imperial Family of Japan is in a way somewhat hidden from the public, but if you want to get to know more about the Emperor Naruhito as a person, you may be pleasantly surprised to know that he has written a book called The Thames and I, (the English translation of his original work, “Temuzu to Tomo Ni” テムズとともに), a memoir of his formative experience at the University of Oxford.

Like the Akasaka Guest House, the Imperial Palace and the Imperial Palace East Gardens have both been closed until further notice (according to the Imperial Household Agency website). This is very unfortunate; however, you can still enjoy a walk around the outside of the palace. The Chidorigafuchi Moat 千鳥ヶ淵 (a short walk from Kudanshita Station) is famous for its beautiful Yoshino Flowering Cherry trees. Even before they burst into bloom in late March and early April, the serenity of the area and the impressive city skyline are worth the visit.