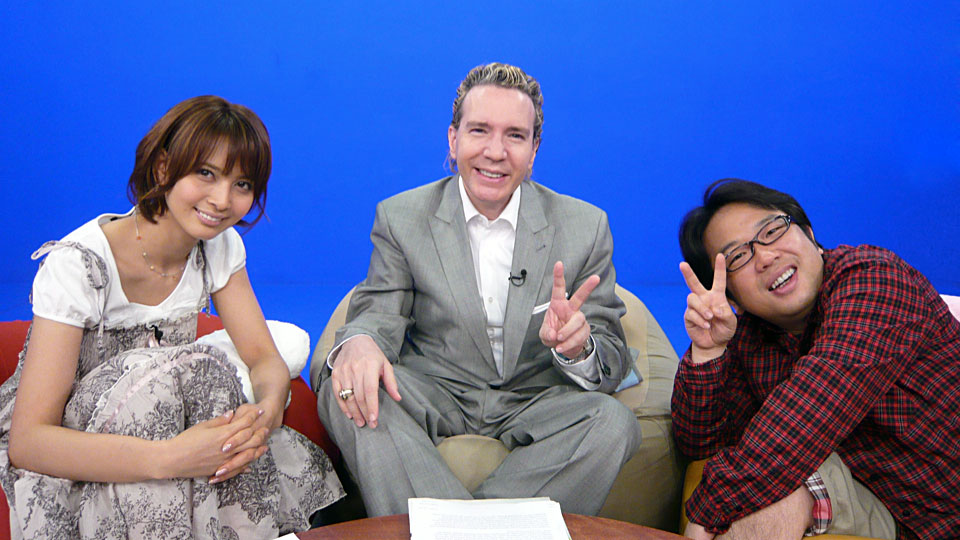 Do you want to be on TV? For foreigners in Japan, it can be easy but is it really as fun as it sounds?

I am marching around the Olympic museum, wearing a big American flag shirt, a star-spangled top hat, and waving American flags, while a camera crew films. Just another day at work. Tomorrow I’ll be dressed up in an evening gown sipping “champaign” (actually ginger ale) at a mansion (just a fancy room in a movie studio). This is the life of a foreign “Tarento” on Japanese tv.

Being “big in Japan” is so ubiquitous that it has become a catchphrase. Many stars have broken out through the Japanese market, or have found an audience here where they did not in their home country. Even Lost in Translation shows Japan’s fascination with foreign actors, as the plot centers on an American film star brought in to film a Japanese TV commercial. All the hype is real: a foreigner, it actually is surprisingly easy to get on Japanese TV. In this article, I’ll cover what it’s like and how to do it.

Get on TV With Random Interviews

For the average foreigner, or foreign tourist wandering around Tokyo the easiest way to get on TV in Japan is to be interviewed by a TV camera crew. There are always crews out in Tokyo on the hunt for a good story. If you are approached, they will ask you some questions. You can answer in your native language, as will be subtitled/dubbed into Japanese when the show airs.

Personally, I was approached to talk about cherry blossom season in Tokyo when I first came over as a foreign exchange student. My friend’s foreign dorm was toured for another program, while a third friend of mine was interviewed when they went hiking up a mountain. If you’re lucky, or if you spot a TV crew doing interviews, you might just get interviewed too (no telling if your interview will be aired though).

If you are pursuing something particularly interesting or unique in Japan, you may be approached to interview with a TV channel. A lolita influencer I know was once interviewed by NHK at her home.

Another method of getting on TV is to sign up with an official foreign agency. If you are lucky, you can be in some Japanese TV commercials, get a part in a Japanese TV drama, or even be in a movie. Mainly, you will appear in Foreign Re-enactment dramas (called saigen dramas) or English-teaching TV programs. Saigen dramas (再現ドラマ) are a unique type of Japanese TV program, where foreign actors re-enact events that have taken place abroad. The event the dramas cover ranges from recent foreign news, to foreign history, to the kind of lowbrow story you’d expect from a third-rate tabloid: “woman throws away winning lottery ticket, sues man who found it and won!” Many foreigners pursue this kind of extra and bit work as a supplement for teaching, or as a part-time job to go with their studies. Pretty much anyone can appear in a saigen drama, or as a background extra, although these appearances may be infrequent.

However, some people can make a full-time living and even a good living (at least, better than teaching) from this kind of work. This is especially true if you have a particular look that is frequently needed. For example, I know one actor who regularly books parts as Santa Clause in TV commercials, or at malls around Christmas time. It may not be glamorous, and some people find it rather frustrating as there is little creative freedom. However, I find the work fun and exciting, and a great chance to make new friends and see places I would never normally go.

Being able to make a full-time living from TV appearances is much harder than simply appearing on tv, especially since for most extra roles “any foreigner will do”. Those who do this work full-time usually book main roles. The pay is higher, but so is the bar. You will likely need special skills (singing, dancing, etc), a unique appearance, or trained acting talent: things that help you stand out against your competition during auditions. Being a successful foreign talent is a job that requires experience and skills.

Be Really Big in Japan

Finally, if you are charismatic and funny enough, and if you speak Japanese well enough you can sign up with a Japanese talent agency. These agencies can boost you to stardom, like Atsugiri Jason, Dave Spector, and Bobby Ologun, tv personalities, and comedians who are household names in Japan.

The most successful foreigners seem to be comedians, who make a name for themselves by acting the part of the “funny foreigner”. The performances of most comedians on Japanese TV are overdramatic and self-ridiculing. It seems to be a major part of TV culture here. Unfortunately, when you mix over-acting and exaggeration with representing a foreign culture, you tend to enter the realm of stereotypes. Hence, this kind of comedy can seem rather “cringe” to a foreign audience watching TV, and even to the actors themselves. To quote Dave Spector himself:

“A lot of times the foreigners on TV, models, and what-not, are compared to pandas. They use that term here — pandas — because they’re cuddly, you can go and have fun with them, and throw a marshmallow and that’s about it. And you don’t get involved any deeper than that. But…since I’m making half a million dollars a year, I’m very happy to be a panda.”

Whether TV famous foreigners are savvy business people who have found a way to make a good living in a niche industry or performing “pandas” reinforcing stereotypes is hotly debated. One thing is for sure: being on TV in Japan is an experience like no other.