6 Japanese Household Ingredients You Need in Your Kitchen

Ready to take a stab at Japanese cooking but not quite sure where to begin? Check out this simple guide on 6 of the most important ingredients to stock your kitchen with and why.

I think we all can agree that, at some point, we’ve relied far too heavily on convenience store foods to get us through the week. Let’s face it, life gets chaotic, and during those times, we tend to reach for the most accessible food solution. I’ve personally found that, after a while of eating the same 7/11 bento or Seyu pork katsu, it can get tiring.

So, if you’ve gotten to the point where you’re ready to start cooking some basic Japanese meals at home, here is my simple guide on what ingredients you need to stock up on and why.

I’m sure you knew this one was coming. Soy sauce, or shoyu (醤油), has been a common staple in households across the world. Coming from my home in America, soy sauce was used more as a condiment for foods rather than an ingredient for cooking.

After settling in Japan and learning some simple Japanese recipes, I realized there is a lot more to soy sauce than I initially knew. For example, soy sauce in Japan has 5 different classified varieties ranging from common, light, extra light, and refermented, to the thicker tamari. Depending on the variety, the flavor of your dish can change from subtle to dramatic.

When it comes to choosing your favorite soy sauce for cooking, at the end of the day, it’s all about personal preference. Soy sauce is also essential in flavor blending. I often combine soy sauce with dashi and other ingredients for my favorite weekday meals such as tamagoyaki (Japanese rolled omelet) and nikujaga (stewed meat and potatoes). 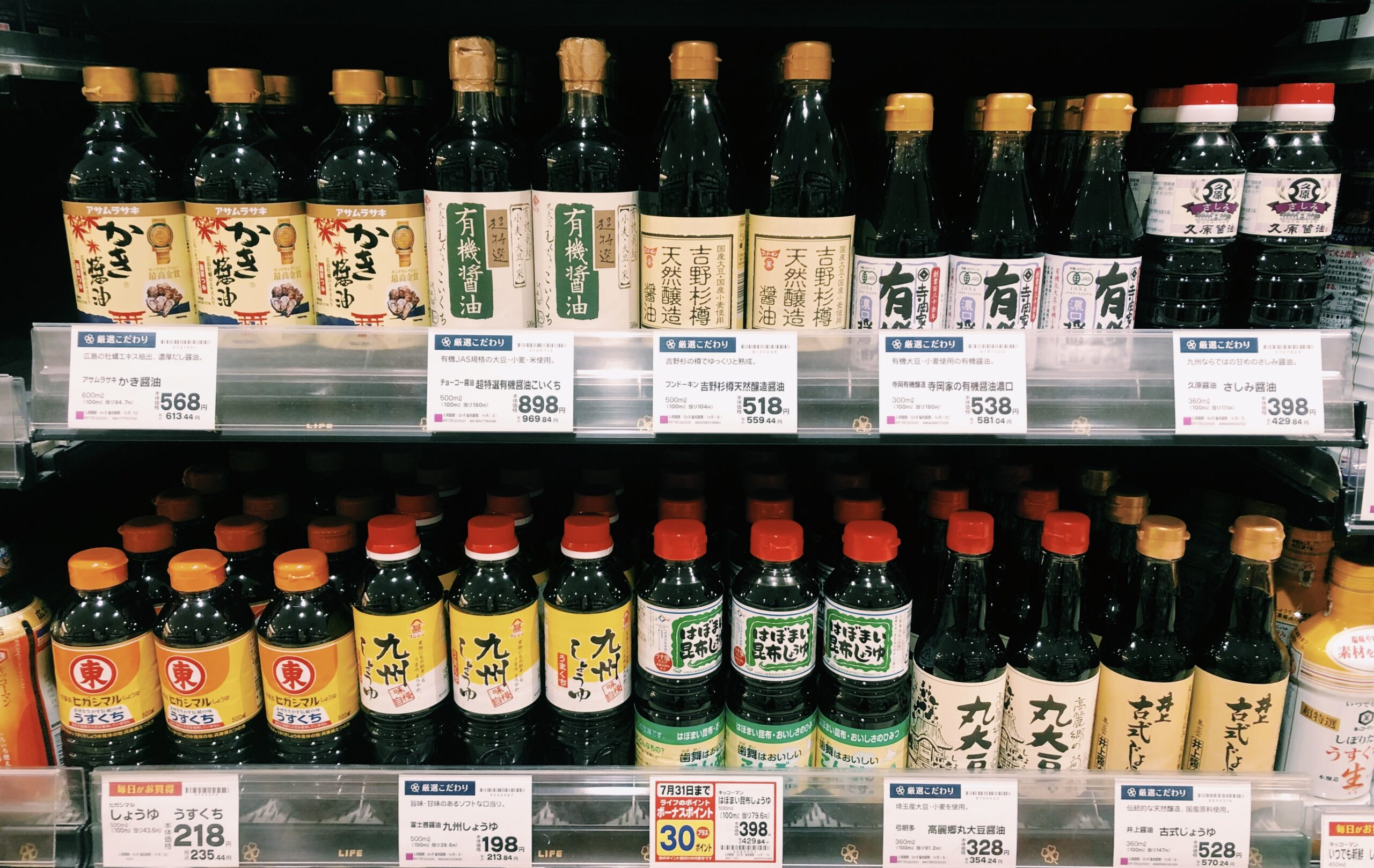 Dashi is absolutely essential to get that umami (savory) taste in Japanese cooking and is used in arguably the most important dish in Japanese homestyle cooking, miso soup. Dashi has five different types, including dashi made from anchovies and even two types of vegan dashi made from kombu, or kelp, and shitake mushrooms.

After being introduced to dashi packets and dashi powder, I found that the process of using and making dashi wasn’t nearly as complicated as I had originally thought. Typically, creating the perfect dashi requires steeping, boiling, and straining which, depending on the type of dashi ingredient you use, can become time-consuming. Dashi packets and dashi powder eliminate prep time, and essentially all that’s involved is boiling water, inserting the dashi packet or powder in, and steeping.

Dashi sticks like these are my preferred choice, and I’ll usually make a small batch and store it in the fridge for three to five days so I can have it on hand whenever I need it. Some of the most popular dishes using dashi are udon, nabemono (hot pot), and as mentioned earlier, tamagoyaki and nikujaga.

It is said that every family in Japan has its very own version of miso soup, and it’s often made fresh every day in most Japanese households, even the super busy ones. Miso, like dashi, has different variations including white “shiro miso,” red “aka miso,” and mixed “awase miso.” Red miso is often more common and preferred in Kanto regions of Japan, while white is often used in Kansai.

Besides using miso for miso soup, it can also be used for sauces for fish and meat, and this is where I usually incorporate it. One of my favorite dishes that calls for miso is buta kimchi, or pork kimchi. Although in some recipes it’s not added, this miso infused version of the dish adds a complex dimension of taste to the dish.

When cooking with miso, it’s important to note that it should be added to dishes right before they are taken off the heat or cooled down, as miso holds digestive aiding enzymes from koji used during fermentation. This will make sure you get all the health benefits from the ingredient! Also, make sure to refrigerate miso after opening. 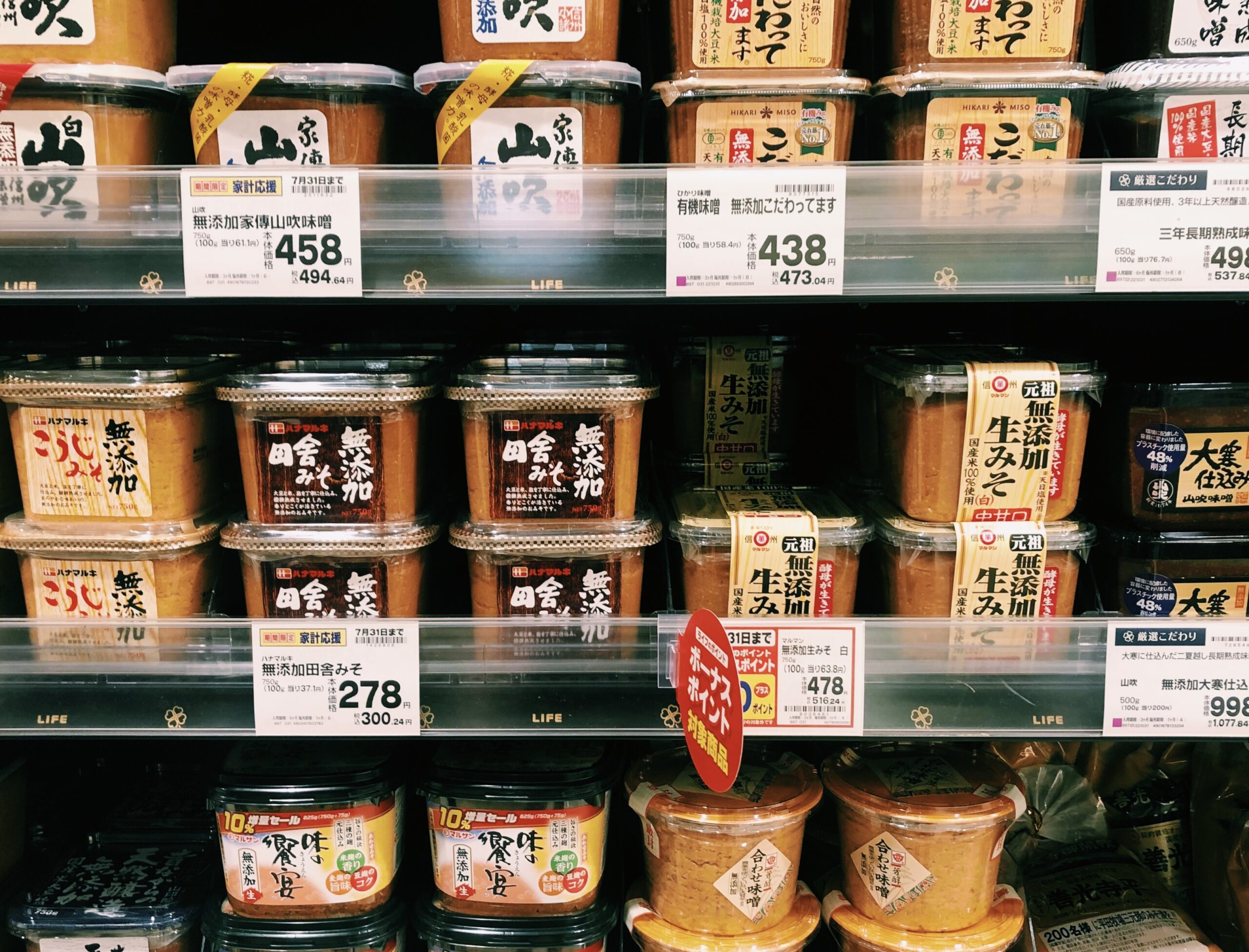 Mirin is an ingredient I constantly find myself replacing since I use it almost every day for multiple meals. It’s extremely versatile and adds a luscious umami flavor to everything.

Mirin is defined as a sweet rice wine, but sometimes it can be confused with cooking sake as it has an alcohol content of 14% for the most common type of mirin called “hon mirin,” meaning true mirin. The other two varieties are “shio mirin,” or salt mirin, and “shin mirin,” or new mirin, both of which contain far less alcohol content than true mirin. Although there is no added sugar, mirin has a mild sweetness due to being made with fermented rice.

Many recipes call for mirin, and I recommend it as a steadfast staple in your growing pantry. Mirin is a main ingredient in sauces such as teriyaki, kabayaki (for grilled eel), and nikiri (a combination of soy sauce, mirin, dashi, and sake). Mirin can also be used for stir fries, simmered dishes, and boiling fish. Another surprise element is that it can add shine and eliminate smells of meats and fish!

Sake is another staple I always have on hand for cooking. You do not necessarily need cooking sake, but I tend to use it rather than regular sake. Drinking sake is brewed differently than cooking sake, so the taste and volume used for each dish will need to be recalculated, and often doubled, to get the same end result as cooking sake.

Cooking sake should be added at the beginning to meats and fish to tenderize and eliminate odors. If added too late in the cooking process, the alcohol may not have evaporated enough and will leave food with a strong undesirable flavor.

Cooking sake has so many other uses including steaming, marinating, making sauces and stews, and is even included in recipes for baked goods!

Potato starch, or katakuriko (片栗粉), is one of those ingredients that you don’t think you need, but in reality, many recipes call for it. Even when using Cook Do recipes from the box, they often require a few tablespoons of the starch. Potato starch isn’t a common cooking ingredient in my home country, so I wasn’t exactly familiar with it.

I’ve now learned that you can use katakuriko as a thickening agent in sauces as well as the key ingredient in the crispy outer coating of Japanese fried chicken, or karaage (唐揚げ). Potato starch also can be used in the place of flour to coat meat for pan frying. So if you’re looking for something to spice up your daily stir-fries, try coating your meat of choice with potato starch and some salt and pepper!