What foods keep the body warm in your chilly Japanese house or apartment? Read this article to find out the top ten winter foods in Japan.

What are your go-to winter foods? I asked some friends for their feedback, and these were their top picks! Read on to find out the top ten winter foods in Japan.

Note: these top ten are not necessarily in order of preference.

Japanese “hot pot” is a staple in the cold months, for an easy-to-fix meal for visitors or a family gathering. Create your dashi soup base and throw in your favorite vegetables and meat for a filling and satisfying meal. Although traditional “nabe-mono” uses a dashi-based broth, other varieties of soup broth have become common. Do you like a cream-based broth? Try soy milk. Do you crave a bit of spice? Try kimchi. Love meat and fish cakes? Try chanko. And other recent popular soup broths include curry, miso ginger, chicken dashi salt, or yose-nabe for a seafood and vegetable paradise! Go to your local supermarket and just look for the 鍋の素 packages for an easy night of cooking. You can cook nabe in a pot on the stove, or with an electrical hot pot on the table. It’s commonly eaten family-style around the table. 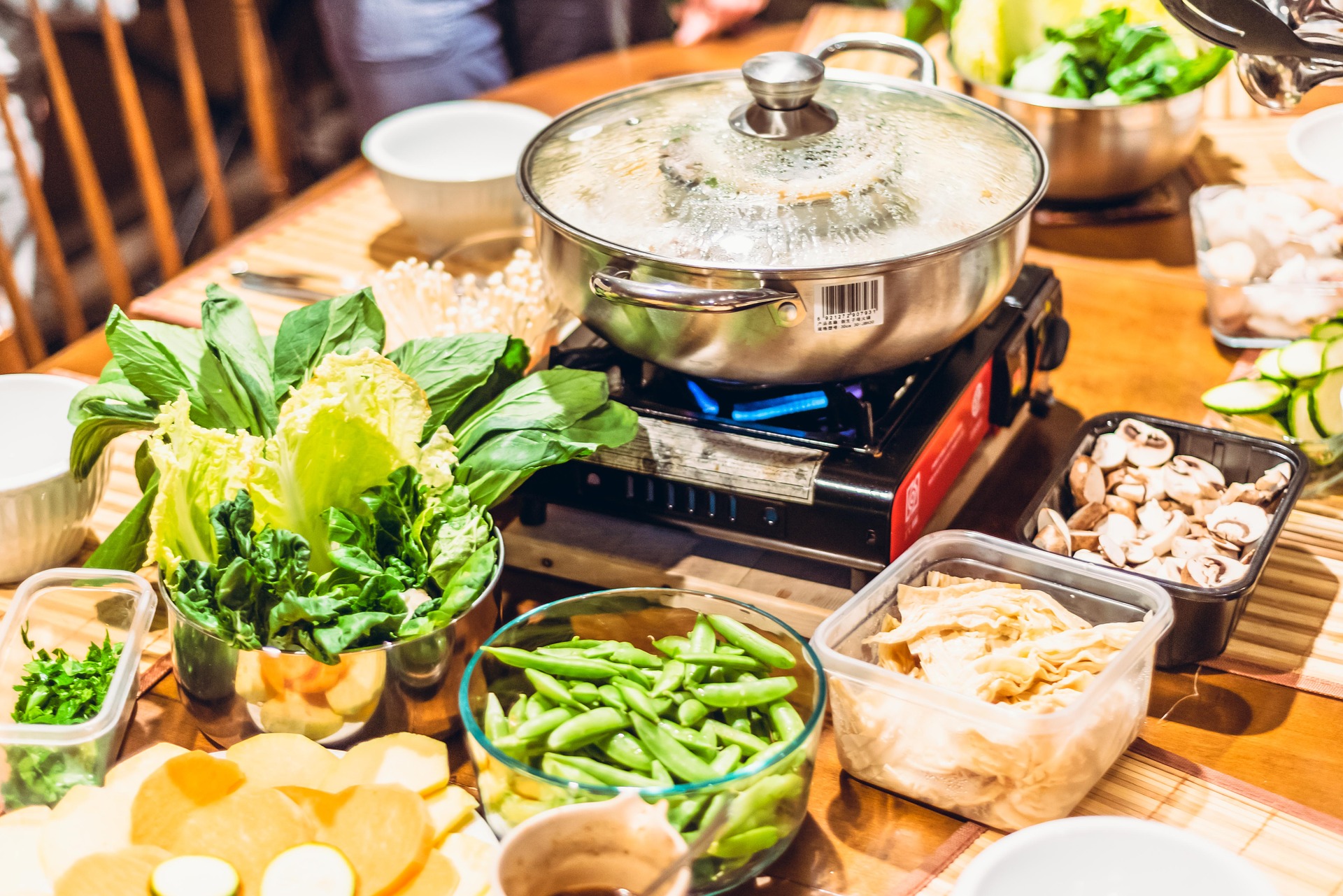 Shabu shabu is a hot pot-style dish with an emphasis on the meat that you dip in the hot boiling pot. Thinly sliced beef or pork and chicken are common shabu-shabu meats, although it is possible to eat seafood as well. After a quick “shabu shabu” (can you hear the sound of the meat boiling as you dip in the pot, “shabu-shabu”?), then put your meat in your favorite dipping sauce of sesame or “ponzu” citron sauce! Eat with other delicious vegetables such as green cabbage, mushrooms, leeks, and tofu. Your stomach will thank you with the various flavors, and your body will be warm and toasty from the heat of the soup.

Sukiyaki is another variation of nabe that is a popular winter dish among young and old due to its rich flavor. The broth is made with soy sauce, mirin, sake and sugar. It is key to note that sukiyaki is usually eaten with sliced beef, but the beef is sliced a bit thicker than shabu-shabu meat. In most Japanese grocery stores, the meat is labeled as such. Lastly, don’t forget to enjoy your sukiyaki dipped in raw egg.

Nikujaga 肉じゃが means meat and potato and is boiled in a soy sauce mixture with onions, carrots, and often shirataki noodles. It’s a nice side dish to add to any meal! 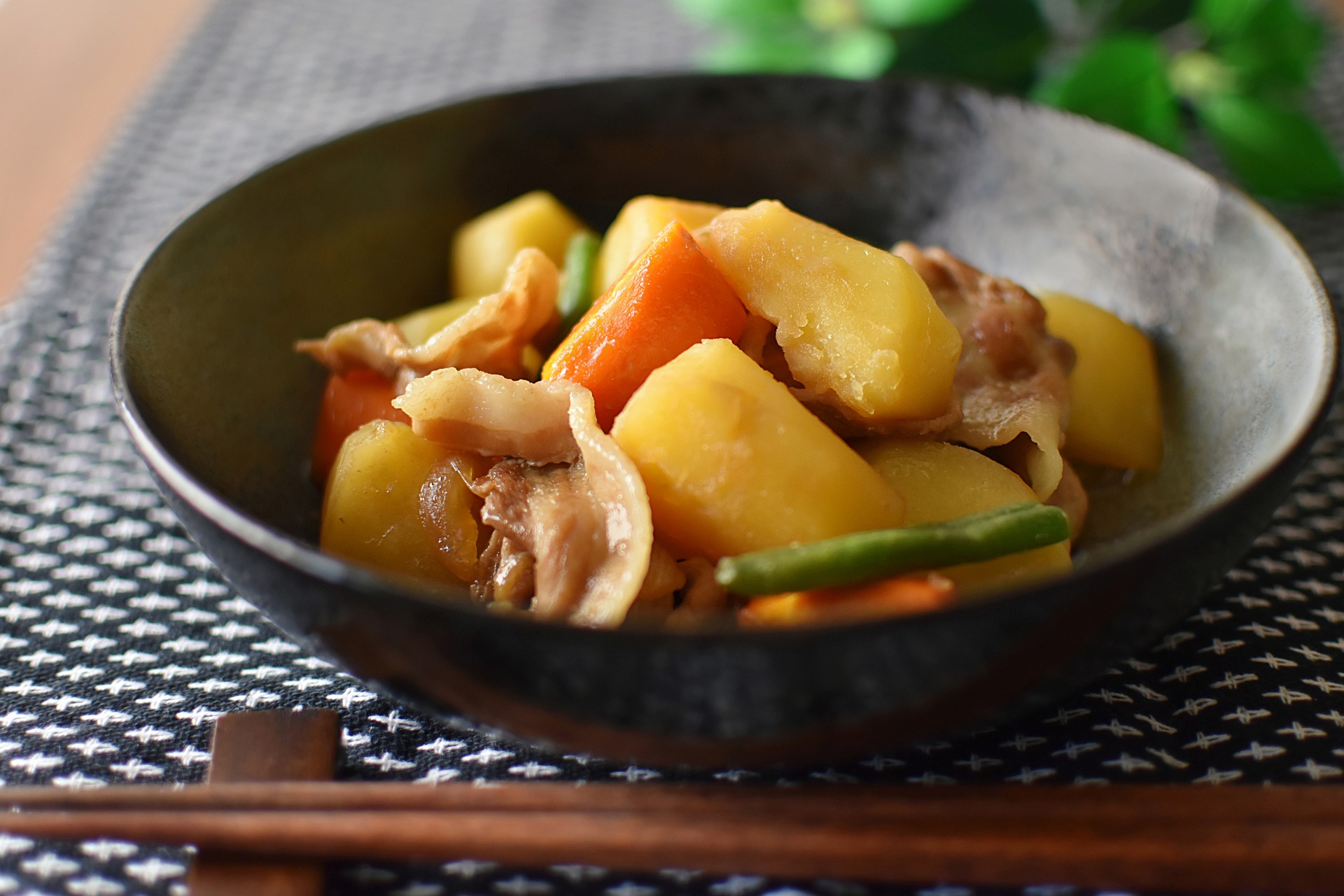 Mikan, often referred to as clementines or mandarin oranges in English, are a delightful and Vitamin-C-rich snack in the wintertime! Many families will eat mikan while sitting around the kotatsu (heated table) while watching nightly TV programs. Enjoy your mikan and stay healthy during the sickness and flu-prone winter months. 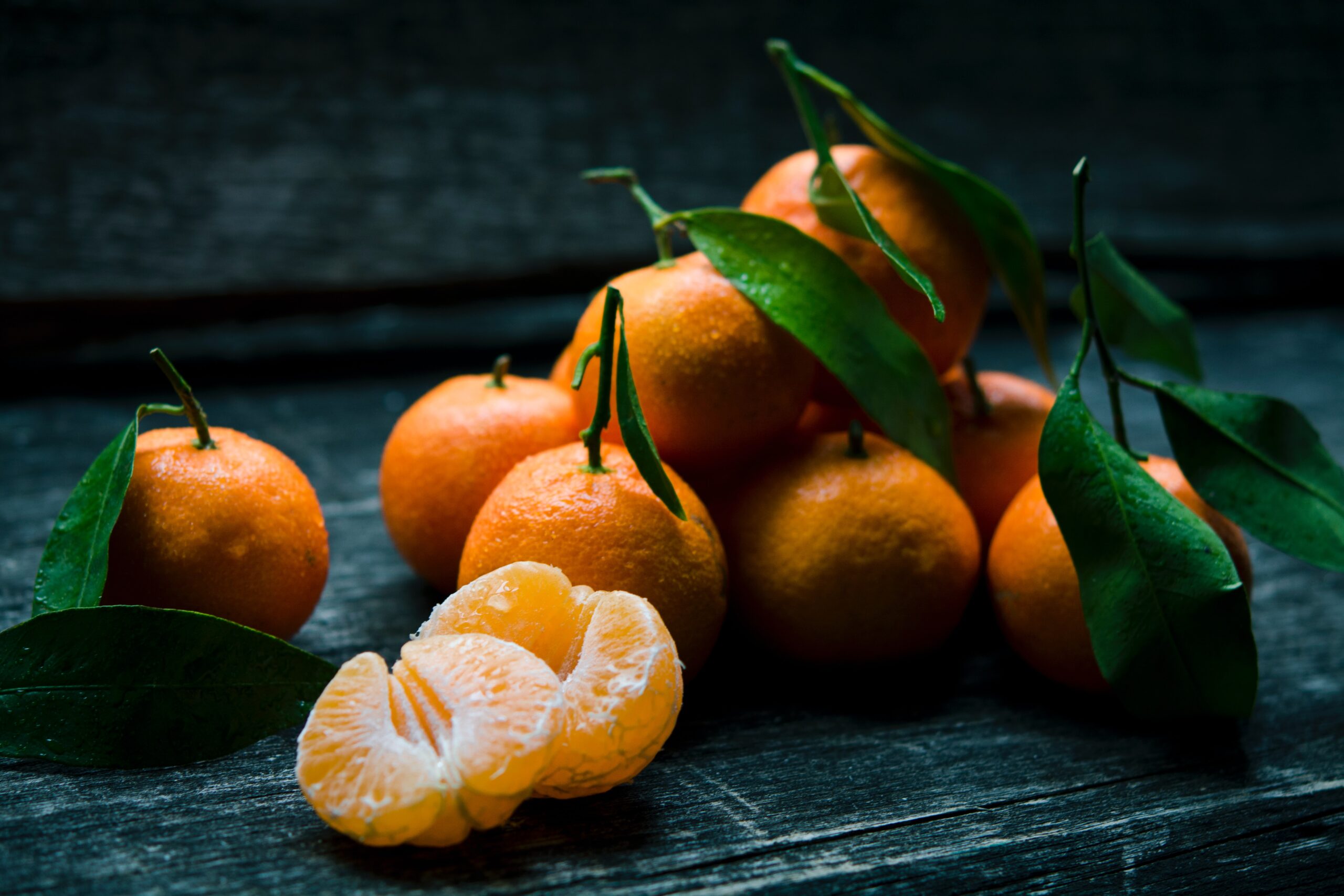 Mochi, Japanese rice cake, is a New Year’s food, but is enjoyed after and around the holiday season. Many public kindergartens and elementary schools have mochi-pounding ceremonies お餅つき, where fresh mochi can be pounded and enjoyed right on the spot! When you’re not able to attend a mochi tsuki event, you can prepare your mochi at home. Packages of dried mochi kiri-mochi 切り餅 can be purchased at most grocery stores. Simply place your mochi in the toaster oven for a few minutes, and cook it until it puffs up and is a light brown color. Mochi is especially good paired with kinako, or soy sauce and nori.

Osechi is the traditional Japanese New Year’s meal. It includes various dishes placed in beautiful boxes and each dish is prepared differently depending on your family recipe. If you’re invited to a Japanese family’s home for New Year’s, you should definitely feel honored to get to try their family osechi. You can never go wrong with some good osechi dishes paired with the ozouni soup on the side! But is ozouni made with shiro-miso or aka-miso? And does it use round or square-shaped mochi? Each part of Japan has its particular leaning on these questions.

Check this out for a picture map of various お雑煮 types!

Yuzu Cha is a popular Korean drink, but has become popular in Japan in recent years. Yuzu marmalade jars can be purchased at any grocery or international food market. Just mix with hot water to enjoy!

Yaki imo, grilled sweet potato, is it a fall or winter delicacy? That’s up to you to decide! But at any rate, sweet potato is good in the cooler months, whether you live in the countryside or city! It’s good grilled or steamed. One yaki imo cooking hack is to steam your sweet potato in the rice cooker.

In the fall and wintertime, you will find that most convenient stores sell warm meat buns known as nikuman. This snack not only warms the belly but can be a nice hand-warmer when walking to the train station!