A modern sake brewery located in the heart of downtown Tokyo is reinventing the traditional drink in a way never seen before… by adding tea and botanicals!

Sake is an old school drink. It dates back probably over a thousand years ago and is often drunk ceremoniously as well as during special holidays in Japan, giving it a pretty uncool image for young hipsters nowadays. A quick glance around the table during a typical hangout with my friends (mid 20s to early 30s) will reaffirm the point that no one really orders a casual glass of sake to sip on, and that lemon sours, highballs, and nama beers are what’s in right now.

Usually I have a pretty hard time mustering up the courage to invite a friend out to a cool sake bar I’ve been wanting to go to, not because they’re unwilling to try, but because I’m a little afraid of disappointing them as they’re obviously not as in love with the drink as I am. Recently however, I made plans with a friend to grab some dinner at a small Singaporean restaurant in Sangenjaya, and upon arriving at the store with no reservation, we were turned down and left with no plan B (I apologized deeply with shame. Ten months of living in Tokyo and somehow I still can’t grasp the fact that I should ALWAYS make a reservation).

Anyway, with nowhere to go, I suddenly recalled that there’s a sake tasting bar in Sangenjaya that I’ve been wanting to go to. I asked my friend if she was interested, to which she said “Yes!” So we turned a couple corners and thankfully was met with a relatively empty and cozy looking store. This place is called Whim Sake and Tapas, which exclusively serves sake from Wakaze, a brewery located right next door. I first heard of Wakaze brewery on a podcast called Sake On Air, a bi-weekly podcast broadcasting straight out of central Tokyo that features stories and people from the world of sake and sometimes shochu.

The episode they were featured in was titled “What Tea & Sake Share; Future of Sake”. The episode talked about Wakaze’s innovative way of brewing sake by infusing spices, botanicals, and even using tea. I was pretty amazed when I first listened to the episode as this has never been done before as so much of sake is rooted in tradition and culture that doing anything beyond could be interpreted as dishonouring its spirit. Anyway, I thought it sounded pretty amazing and made note to visit the tasting bar when I had the chance, so here we are!

When we entered, we were greeted very warmly by the small two person staff and were presented with the menu (no English menu, but there’s a pamphlet in English that explains the sake styles they serve). Throughout the meal, the staff proved to be knowledgable about the menu and proficient at English, making communication easy and fun!

The drinks are all sectioned off properly into their own series: Orbia, wine barrel aged sake; Fonia, botanical sake (made with sancho, ginger, yuzu, lemon); Fonia Tea, tea leaf sake (made with jasmine/black tea with orange peel, clove, rose petals); doburoku, unfiltered, freshly scooped straight from the tank sake; and amazake, a sweet, low-alcohol drink similar to sake. Between my friend and I, we explored different sections of the menu and eventually ordered probably at least one of each type by the end of the night. The great thing about Wakaze is that there’s a corresponding taste comparison chart for each sake that will tell you where it sits on the sweet-dry, mild-sour spectrum. It’s very handy for beginners!

While reading some reviews on Google after my experience, I noticed a few comments saying things such as “Not sake”, “Confused”, and “Too sweet”. These comments are a little disappointing as I think it’s important to enjoy the sake at Wakaze with an open mind as they’re clearly trying to innovate and create something new! I’d say a few of my glasses even sat somewhere between a sour beer and wine. One was even bright red! All are very easy to drink and simply delicious so long as you don’t take a sip expecting traditional Japanese sake. 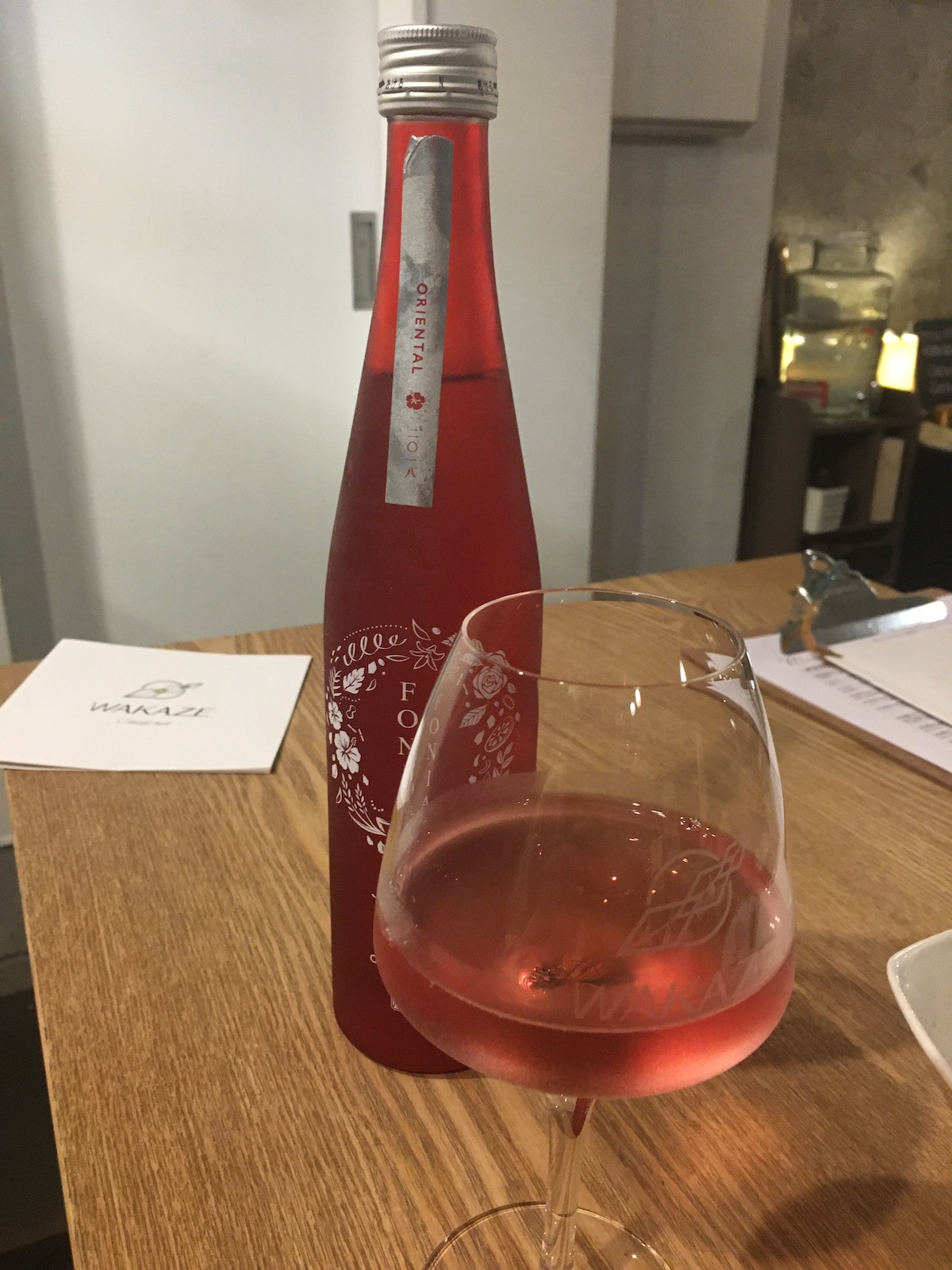 On top of drinks, we also ordered a couple of food items. Before this, however, we were brought the typical otsumami snack (that’s usually covered by a seat charge) in Japan that was far from typical! A plate of various little bites of food were brought out, including Szechuan peppered edamame, sweet melon and prosciutto, and some kind of brownie (there were a few more but I can’t recall them and I forgot to take a picture, ahhhhh). A few were definitely seasonal but what they all have in common was that they were all delicious with sake!

My friend and I weren’t very hungry so we ordered fries. …. I know. I’m not sure why we did that either despite the menu being full of other interesting sounding dishes, but it ended up being some of the tastiest potatoes I’ve ever had so absolutely no regrets there. Seriously, they looked like very unassuming potato wedges, but they were perfectly salty, garlicky and crunchy. We also ordered a large piece of bacon marinated with leftover sake lees made from their sake! It gave the meat a very interesting savouriness and fruitiness.

With all this being said, I hope people give sake a chance, especially with companies like Wakaze who are reinventing the very definition and taste of sake itself. Another great point made during Sake On Air’s episode was that Wakaze’s sake had 10x the acidity level of traditional sake (almost wine). This means that it pairs well with foreign cuisines that are heavier and heartier as the acidity is able to cut through the richness. As sake continues to gain popularity around the world, I hope to also find further development of interesting sake styles and flavours!