A Deep Dive into Nakano Broadway

When you think about anime and gaming culture in Japan, it’s likely that Akihabara is the first thing that comes to mind. But actually, there is something quite like it that can be found in the lesser known, Nakano Broadway. And honestly? It’s pretty impressive! So if you’re ready to take a deep dive into Nakano Broadway, get ready to find another spot to indulge in all your anime-loving hobbies and more!

Navigating the expansive metropolis that is Tokyo can be overwhelming. That is, until you turn wandering aimlessly into an adventure, or even a treasure hunt for those hard-to-find items we know are bookmarked somewhere on your Instagram or Tiktok. Regardless of how many times you’ve visited or how long you’ve lived here, we can all agree that you will never get bored exploring everything that Tokyo has to offer.

If you’ve spent any time planning or daydreaming about a trip to the anime capital of Japan, everyone knows that Akihabara, also known as the “Otaku Mecca,” is the place to go. However, if it seems like you’ve explored all there is to offer in “Akiba,” then maybe it’s time to try your luck in the lesser-known Nakano Broadway.

Established in 1966, Nakano Broadway was created during one of Japan’s most historic economic growth cycles post-war. At one time the multi-floored shopping mall and apartment complex paralleled popular shopping districts like Shibuya and Ginza, which specifically catered to luxury goods.

Although there are still shops reminiscent of earlier times, such as a variety of extravagant watch retailers – Nakano Broadway’s popularity saw a significant shift in 1980 to cater to the more niche otaku community.

This was mostly credited to the opening of a second-hand manga shop called “Mandrake” (まんだらけ). The mall’s overall aesthetic resembles something of a retro shopping experience, almost as if it has been frozen in time. It’s not entirely out of the ordinary to find toys dating back to the 1960s sitting next to toys released from yesterday. 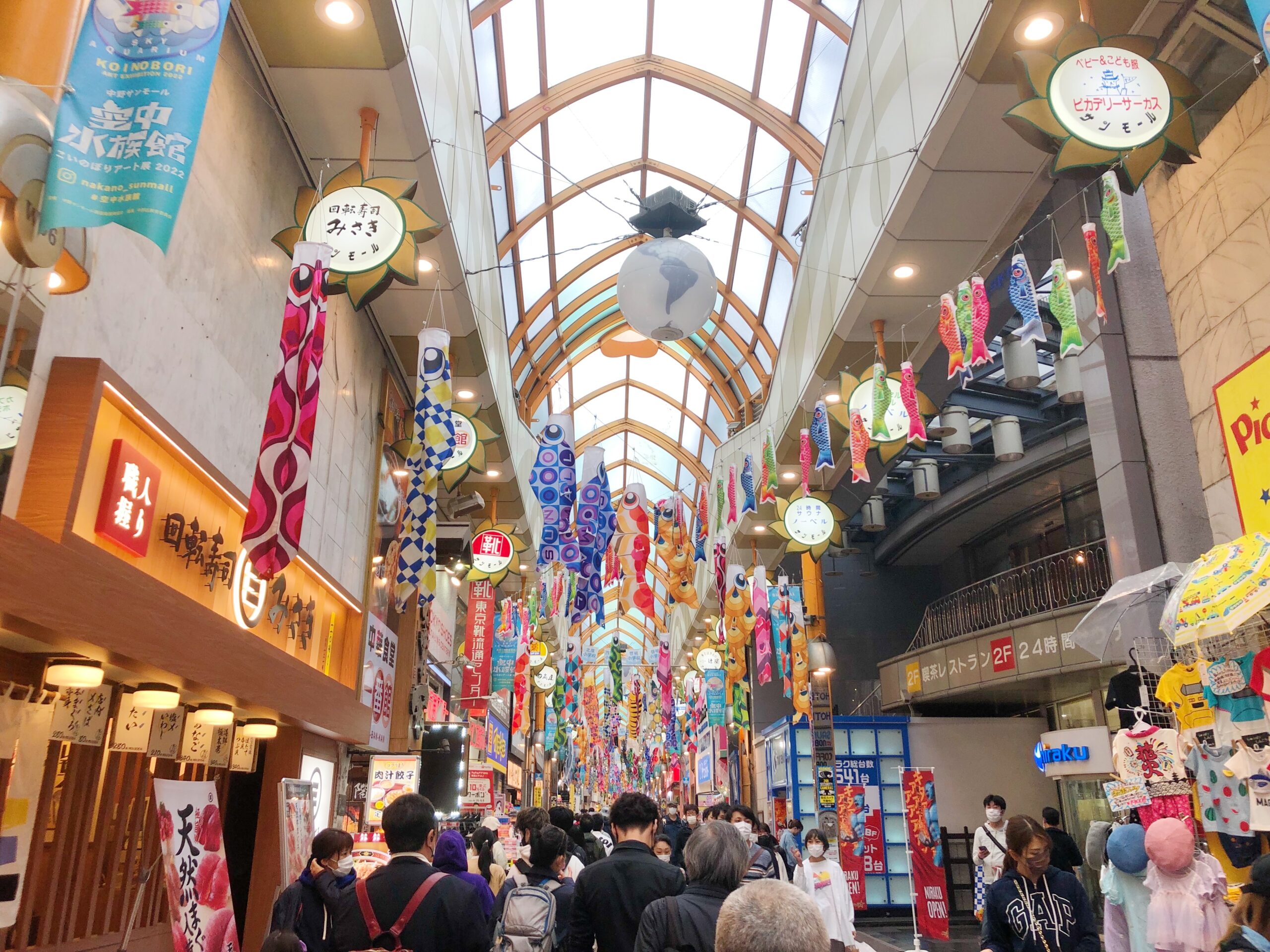 First Up: The Sun Mall

Before reaching Nakano Broadway you’ll first enter the “Sun Mall,” a covered shopping promenade between the North Exit of Nakano Station and the entrance of Nakano Broadway. A long glass roof stretches across the span of stores and restaurants similar to many basic shopping areas throughout Tokyo.

Here you’ll find a variety of cafes and izakaya. You’re even sure to find an abundance of coin-operated toy dispensers (gachapon) nestled between the shops and ready to swallow your 100 yen coins for another priceless novelty.

And finally, at the very end of the promenade, big white letters span across a red banner spelling out NAKANO BROADWAY will greet you as soon as you’ve reached the entrance of the shopping mall. 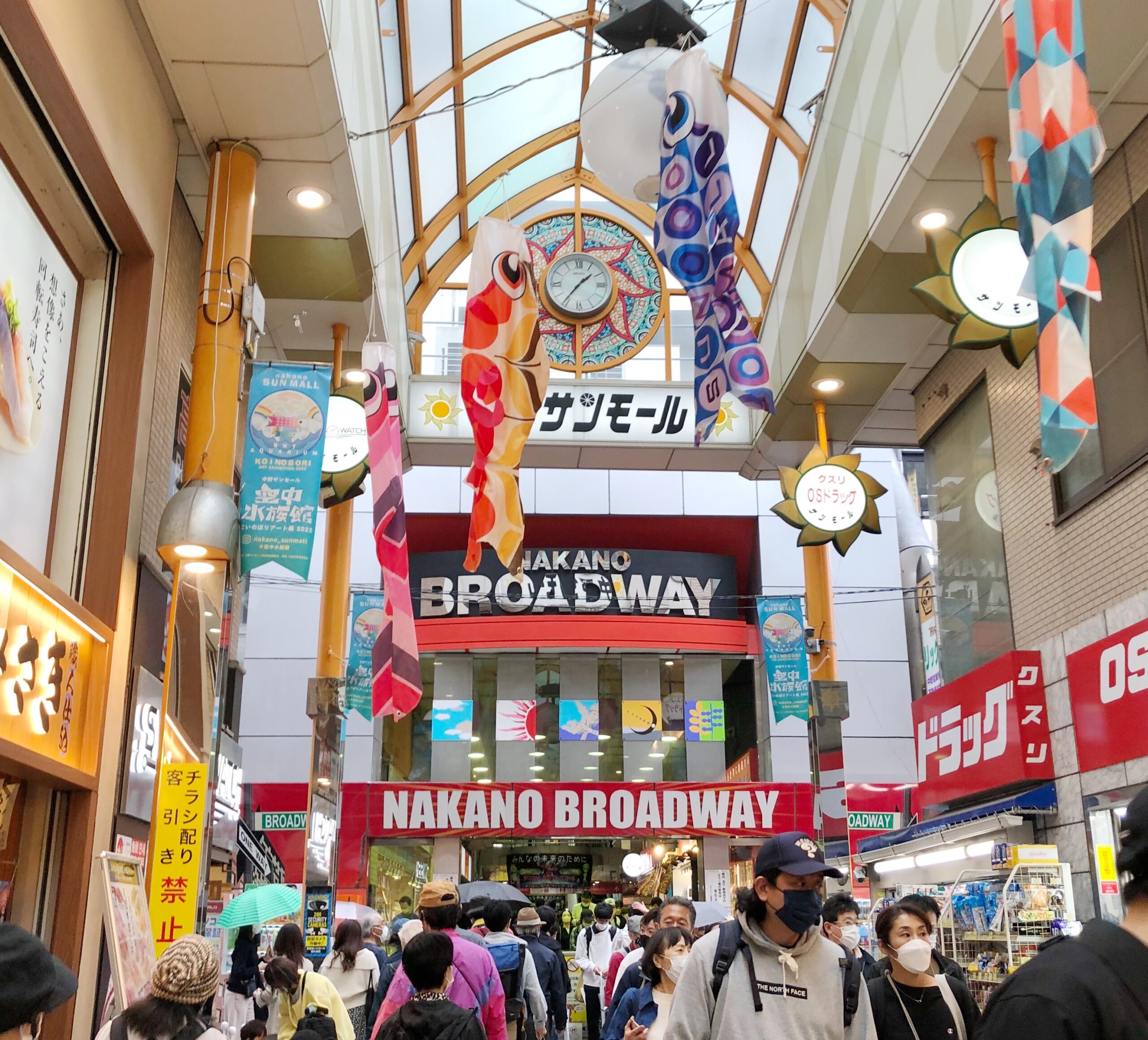 On the first floor, it’s likely you’ll find a mixture of personal goods like varieties of cosmetics, tasty-looking Japanese confectioneries, and clothes. The first floor might not look like much, but If you make your way to the left you’ll find – you guessed it – a complete aisle of gachapon stacked from floor to ceiling.

Even further on, the coin machines continue following the maze-like floorplan into hidden cubbies where even more obscure items are waiting to be discovered. If specifically looking for gachapon, you can find it almost anywhere in Tokyo, but I’ve found the most bizarre and rare gachapon machines here in Nakano Broadway! It’s going to be really hard for you to decide whether to go up or down a floor, there is so much to see. So keep it simple, it’s really going to depend on what you’re looking for.

The basement level is divided into two very different subcategories. The Northern side is considered the fashion and lifestyle district that offers kimono, clothing, and interior goods.

The other basement subsection is the food district. Whether you’re looking for a quick meal, or to do some grocery shopping to cook at home, you are sure to find it here. At the very center of the basement level, you may come across the ice cream stall Daily Chico (デイリーチコ). Some come all the way into Nakano Broadway to try this sought-after eight-scoop towering ice cream cone!! It’s a lip-smacking deal that may be difficult to gobble down, so bring a friend to help share. 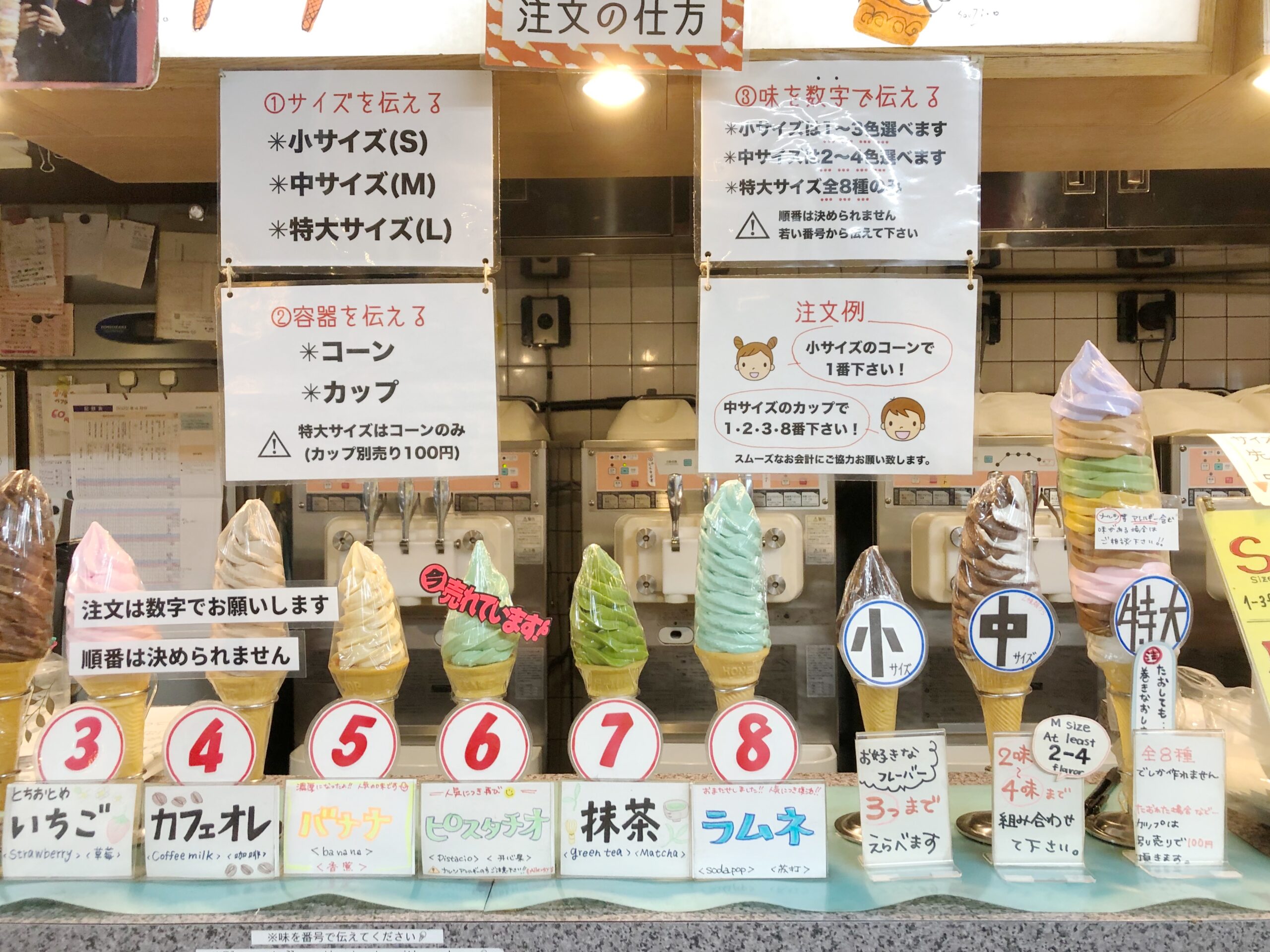 The second and third floors are overwhelmingly packed with hobby shops, most of which are specifically curated to anime and gaming enthusiasts, exactly what you’re here for right?

These floors alone are one of the main selling points of Nakano Broadway. Retro and second-hand toys, hard to find figures, trending anime badges and keychains, Pokemon plushies, and cards, all can be purchased here. 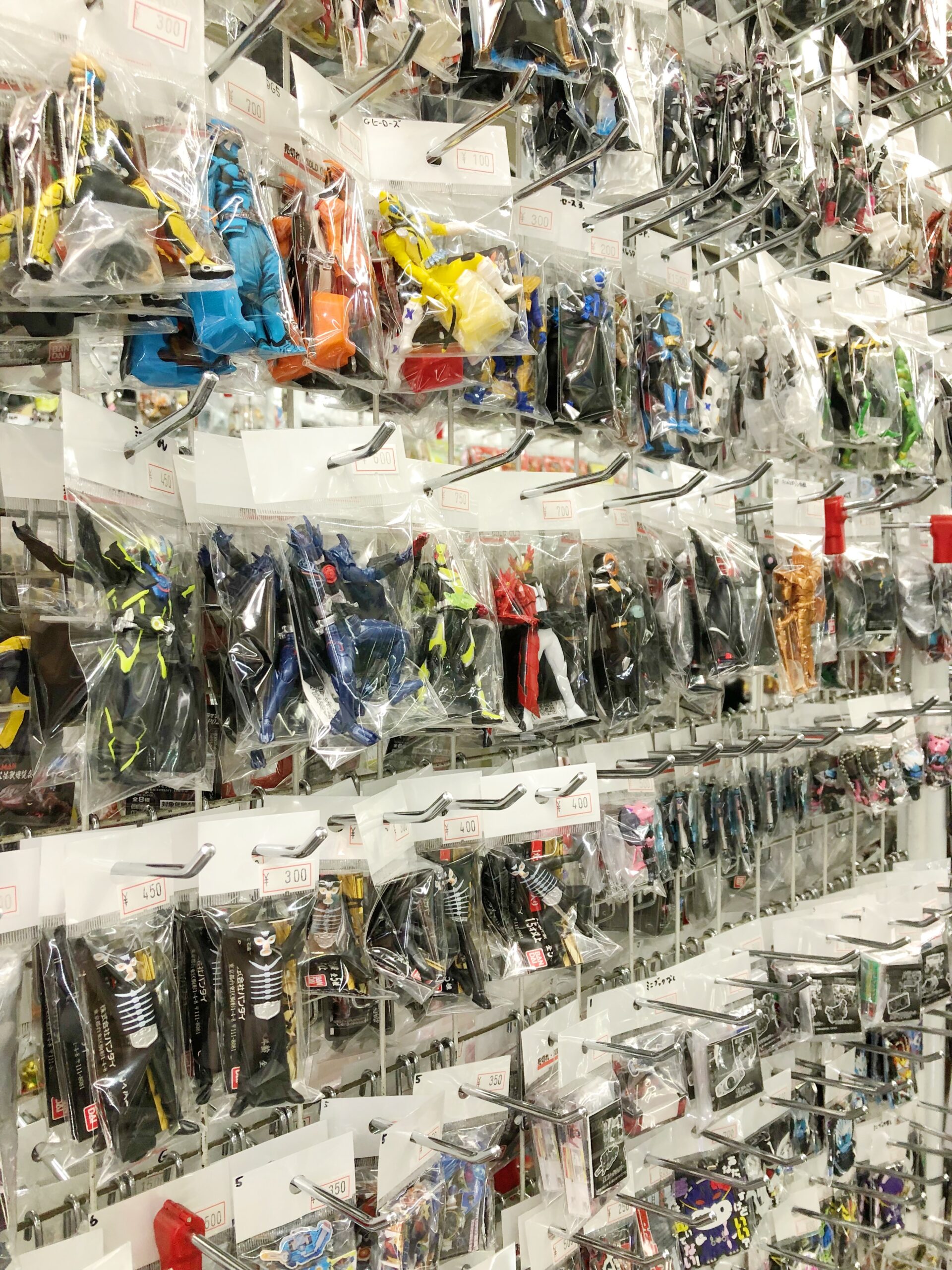 The extremely rare goodies are carefully placed behind glass, but even those items are usually priced on the lower-end when compared to other secondhand shops outside of Nakano. I was delighted to see Disney collectibles beside current anime merchandise and suddenly found myself digging through bins of dated calendars and notebooks. Suffice to say, I left that shop with a handful of items including a [email protected] keychain that has now become a newfound hobby credited to exploring Nakano Broadway. 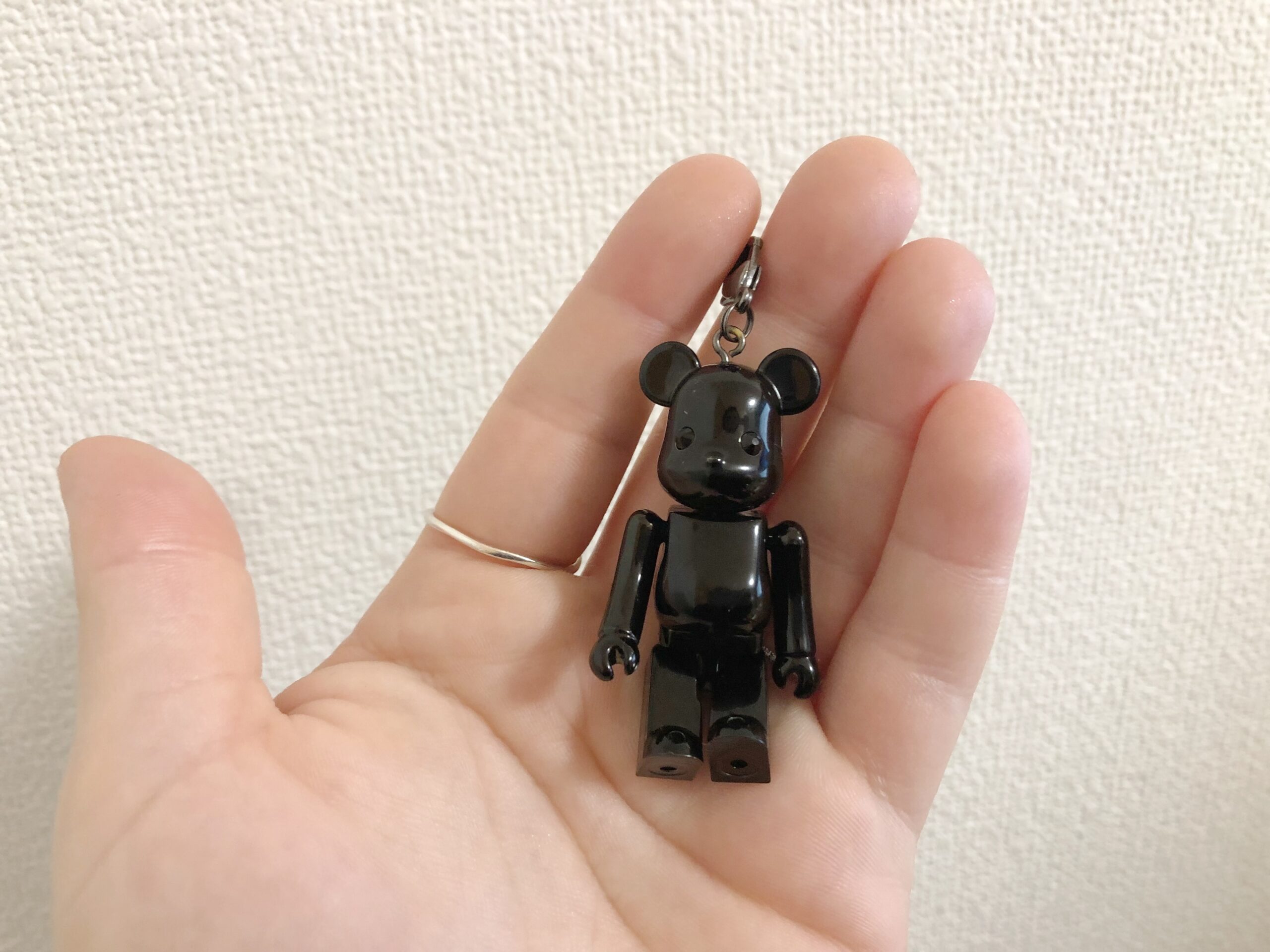 After aimlessly wandering around ecstatic you’ve found a new place to indulge in your love for gaming and anime, the floors quite literally mesh together. It’s almost hard to tell where you are until you notice the Mandrake stores.

Most of these stores are located on the third floor, but given that there are 27 of them in total, a few of their smaller chains are also on the second floor such as Mandrake Card, Mandrake 4, Mandrake 4.1, Mandrake Special, and so on. 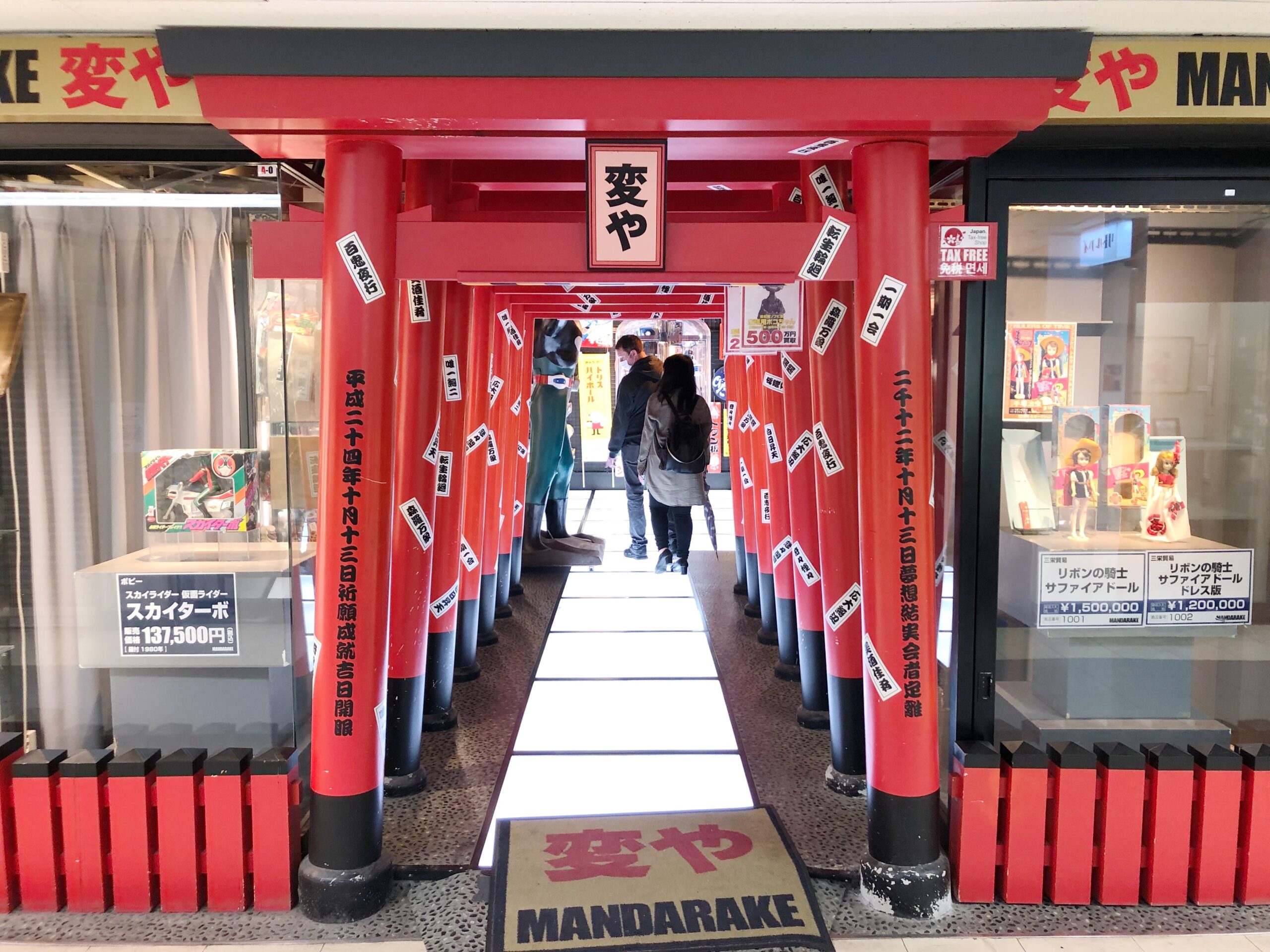 Each Mandrake caters to a different theme and almost everyone can find that special thing they didn’t know they needed.

The fourth and final floor offers a mixture of everything, including three separate dentist offices. So if you’re looking to get a cleaning before or after shopping, Nakano Broadway’s got you covered.

So basically, anything you need to treat yourself on a day trip can easily be found here! Today Nakano Broadway has become a spot many flock to in search of community and a certain joint comradery among shared interests. It’s not Akihabara, but honestly, that’s the appeal. Nakano Broadway’s charm is that it brings everyone together, with its ever changing stalls and shops, it’s no wonder everyone keeps coming back for more.

Take either the Chuo, Chuo-Sobu, or Tozai Lines to Nakano Station. Exit via the North Exit and follow the long shopping street straight down to the entrance of Nakano Broadway. Hours vary, but officially, the shopping mall opens at 10:00 a.m. Each store has its own individual hours, so please check specific shop information and more on Nakano Broadway’s official site here: https://nakano-broadway.com/