Yokohama’s Chinatown is perfect for a day trip, a night out, or a romantic date. Here are 5 reasons to go!

After the opening of Yokohama’s port in 1859, a large Chinese population settled in the city, near to the port. In 1955, the Chinatown was officially recognized and called Yokohama Chukagai (also called Motomachi Chukagai). Only a quick 35 minute trip from Shibuya station on the Minato Mirai line, Yokohama’s Chinatown is a wonderful place to visit. It’s perfect for a day trip, a night out, or a romantic date. Here are 5 reasons to go!

1. It’s Probably the Cleanest Chinatown in the World

Chinatowns around the world have a reputation for being less than sanitary. Although this is changing, Yokohama’s Chinatown is, and has always been, spotless. All food preparation is held to a high standard. The streets are always well washed, and never filled with trash. Even street food stalls provide dedicated bins for their customers to throw away their packaging and leftovers. More recently, every shop requires a temperature check before entering and every shop, including street food stalls, provide disinfectant alcohol for you to clean your hands before eating.

2. It’s the Largest Chinatown in Asia

If you can’t actually travel to China, Yokohama’s Chinatown is the next best thing! The area covers 250,000 square meters and has over 600 shops and restaurants. You could happily spend a day here meandering through the winding alleys while exploring all the shops, restaurants, and specialty supermarkets. Out of the three Chinatowns in Japan (one in Kobe, and one in Nagasaki), the one in Yokohama is the largest. Furthermore, not including China itself, it is supposed to be the largest anywhere in Asia.

3. It has the Best Chinese Food 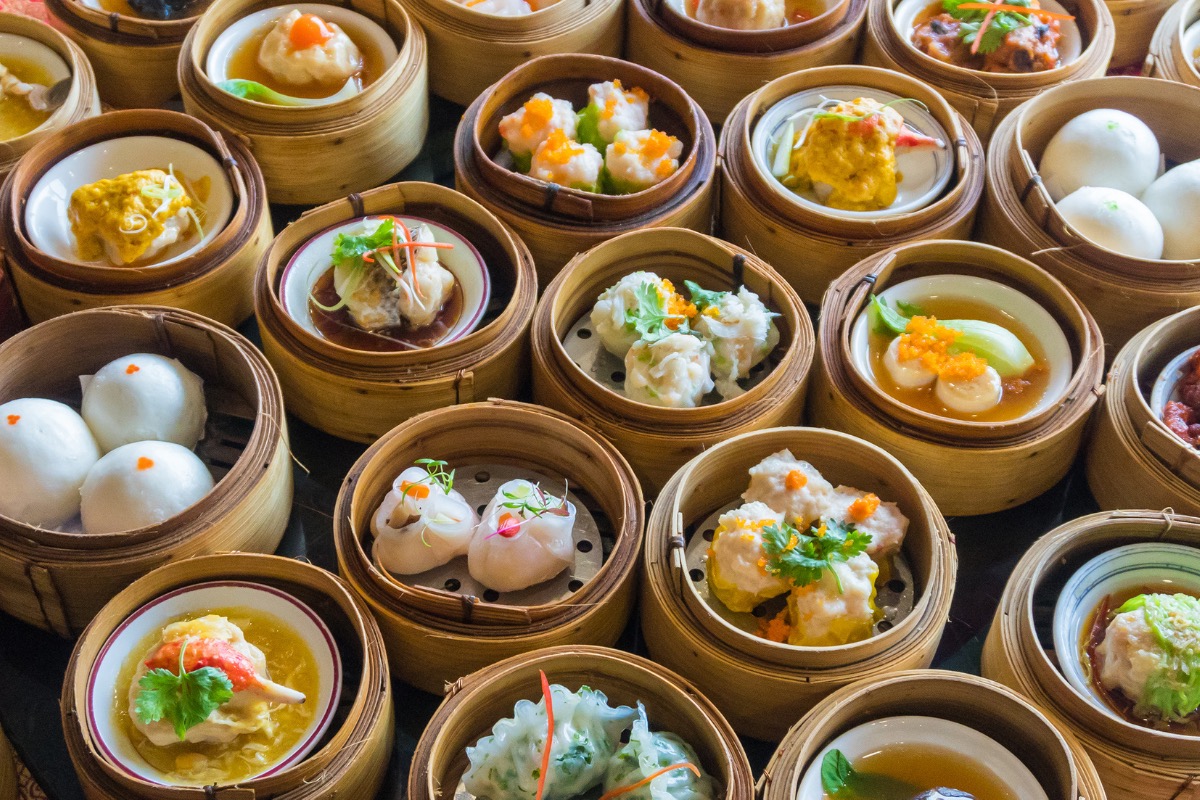 There are plenty of Chinese restaurants in Tokyo and Kanagawa, but the ones in Chinatown are without a doubt the best and most authentic. On the fine-dining end of the spectrum, the 130-year-old restaurant Heichinrou serves multi-course Cantonese cuisine. It is the oldest Chinese restaurant in Japan, and while pricier than other options, is well worth it for quality. If you prefer spicy food, a rare find in Japan, then head to Keitokuchin (景徳鎮), which serves authentic Sichuan (四川料理) dishes.

There are food from other Asian cuisines as well, including a new Vietnamese coffee shop Café Giang that makes traditional Vietnamese egg coffee. If you feel like dessert, the well-known Jukei Hanten sweets shop/dim sum restaurant sells mooncakes and tea. You can even order a bundle of snacks, tea, and frozen steamed buns to be sent to your home for you or to the home of a friend or relative as a present. 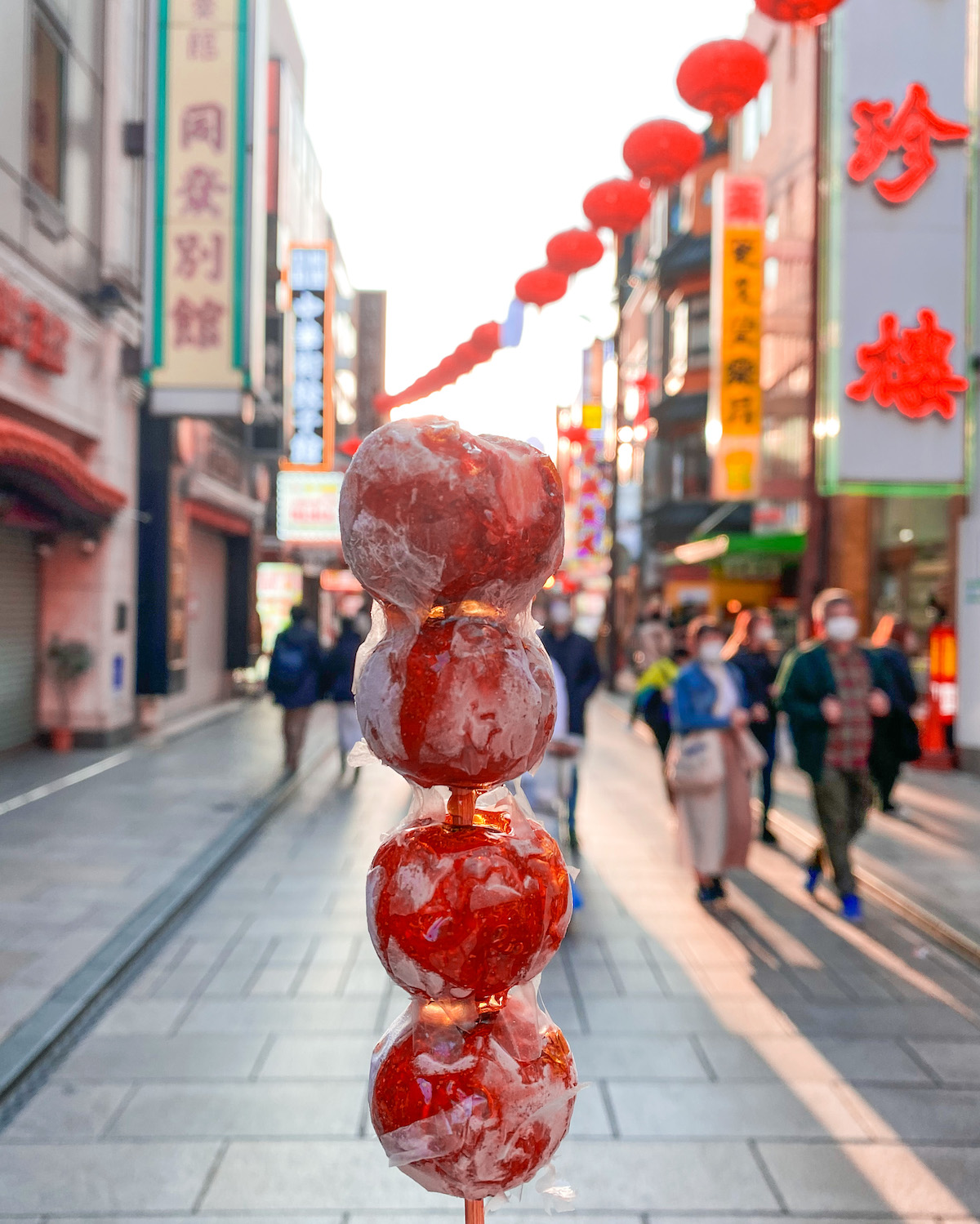 It’s hard to beat 1500 yen for unlimited dishes… and unlimited time, an offer common at Chinese buffets in Yokohama’s Chinatown. You could literally sit here all day, stuffing yourself full of their one hundred menu items, including pecking duck, shark fin soup, steamed buns, dumplings, congee, and sesame balls for dessert… The buffets have varying menus, with prices ranging from 1200-4000 yen for anywhere between 90 minutes and all day. Two of the most popular buffet-style restaurants are Shichifuku (小籠包専門店 七福) and Keikarou (慶華楼).

If you’re a more active kind of person who prefers to explore, then you can eat your fill while trying the many types of street food instead. There are stalls selling steamed buns, filled with pork, vegetables, or red bean paste, decorated like peaches and pandas. There are delicious soup dumplings, shumai, filled with a tender meat and broth mixture that melts in your mouth. More recently, you can find the Instagram-worthy red tanghulu, sugar-coated strawberries, or hawthorn berries, on sticks. Finally, tapioca shops abound, even more so than in the rest of the city, with all types of toppings and flavors. 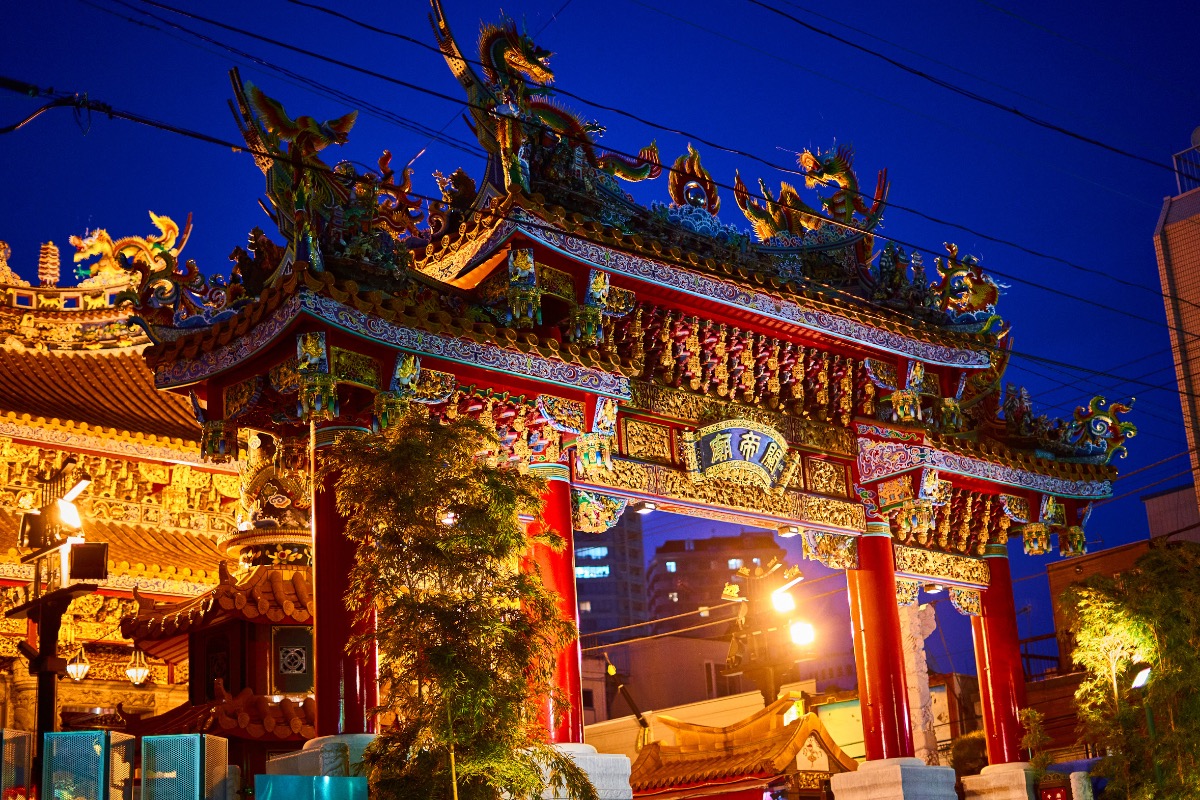 The main Kanteibyo gate welcomes visitors with an explosion of color amidst the brick and concrete of Yokohama’s other buildings. Three other gates stand at the other entrances, and five more can be found within Chinatown itself. Kanteibyo temple, also called Guan Gong Temple, or Emperor Guan’s Temple, is an elaborate building, with sloped golden roofs and red walls. Visiting is said to bring good luck, as it is home to the god of good fortune and prosperity. The second, more recent temple, Masobyo temple, opened in 2006. It is a Taoist temple dedicated to the sea goddess Mazu. It is an intricate six-sided, two-tiered building, very different from the Japanese-style temples and shrines.

Every year in mid to late February, the town holds the annual Spring Festival. Although the performances have been canceled the past couple of years, the festival’s lovely lanterns still make the streets come alive. These Chinese lanterns weave a red and gold web above the narrow streets, while a large, lantern dragon surveys the scene from above, making the area magical, especially at night.