Beyond old silences and modern noises Japan is well known for its busy Shibuya, pouring neon light on an electric-vitamin drugged population of buzzing bee workers of a grey and…
By Tokyo Room Finder • November 15, 2018

Beyond old silences and modern noises

Japan is well known for its busy Shibuya, pouring neon light on an electric-vitamin drugged population of buzzing bee workers of a grey and pink world. Then there is this image of a quiet straw-colored tatami floor with the green of the garden blushing in autumn and the delicate eyelids of the buddha gently stroking the neck of monks as they bow down to the sound of the gong. ‘Japan, between tradition and modernity’, is usually how we formulate the impossible equation of marrying these two pictures in the same cultural frame. Yet, there was a traditional laughing Shibuya and there is a Modern tatami room. It is of the latter that I would like to talk today, as it is from the family of the Japanese tea room where I practice the Way of Tea. One of these modern tatami rooms greatly inspired me. So, stepping a little bit away from the tea room, I hope here that I can express how the spirit of Japanese tea ceremony is actually in many places of Japan. Most of these places have no name in touristic guides, they are not looking for crowds of people. To be honest, with my current level of Japanese, I actually do not know the name of these places. I just stumble upon them. But the Japanese people who like them have their own books where the best shops, cafés and temples are recorded. 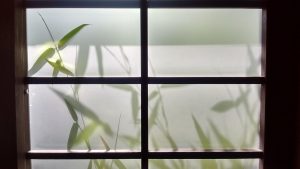 A  jewel of darkness

One morning of December, as I was spending some time in Kyoto, I noticed the entrance of a shop. Or was it a shop ? I could not tell. I had passed by its door countless times before without even realizing it. Just like any shop, it had a curtain cut in two in front of the entrance. But this piece was simply white, it did not display any crest, any pattern. Nothing could indicate the nature of what was inside that shop, nor if it was open. I passed the curtain and entered a narrow, black wood building. Inside a two square-meter room was a counter and some sweets in it. Sweets like I had never seen before, and like I have never seen elsewhere since then. Shaped like little cubes or palets of a unique color, topped by half a caramelized nut or a touch cream or even a bit of pepper. The choice was scarce : eight different flavors among which matcha, chocolate, lemon, framboise and seasonal tastes like pumpkin or apple. There was also a choice of teas to go with it. The basics: Matcha, Sencha, Hojicha, Black tea and floral tea. Nothing else. Looking around, I noticed that very steep dark stairs were going up into a pale white room from which a handful of piano notes glittered distantly. I ordered some sweets and a matcha, climbed up the stairs feeling that I was raising myself a good forty centimeters above the human world at each step and arrived in the room. An empty room.

An art of quiet minimalism

The walls were perfectly smooth, made of a cloudy white plaster. Looking at them felt as if my eyes were closing and the white diminishing. Few chairs at a counter, opaque windows, a large table with benches, all in the same old wood, tarnished by the ages, polished by thousands of hands. Up on the ceiling, a single window where I could see the sky, distilling the light of day inside.

I sat on the bench and, facing me, the simplest landscape I had ever seen. Two chairs, one table, a grey wall. I took a picture of it. Dull as it is, especially thanks to my poor camera, this picture is still, to this day, one of the greatest symbol of what I love about Japanese aesthetic. 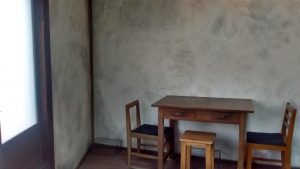 If you have heard of Japanese minimalism you might not be surprised to know that it has some roots in the Japanese tea ceremony. As the guest enters the small hut, the room is empty. There is only one calligraphy, sometimes one flower vase, and the sound of water softly shaking in an old kettle. Just like with Japanese calligraphy and painting, the emptiness first purpose is to let your imagination roam free. This is quite the opposite of the saturated kitsch of Tokyo and Osaka’s most famous districts.

There is no need of a tatami to have a first taste of the emotion produced by a tea room. Modern quiet places of Japan have already developed it, refined it and accustomed it to our taste. Though I will always love dearly and in a special way the sensations of a tea room, I think it is comforting also to think that such spirit of simplicity has not been trapped into tradition and has its own modern forms. Most Japanese today do not like to sit on their knees, some just cannot do it actually. And there are pleasures with being on tatami, on the ground, listening to the soft and irregular sound of the kettle gently laughing. And there are other pleasures in being seated on a wood bench, enjoying the delicate piano notes teasing your attention across the room. In both cases, the sound keeps your mind alert. That day, I was not in a tea room, but I was certainly learning how to serve tea. As I said in a previous article, tea is an education in aesthetic, and creating such kind of atmosphere was definitely part of the education I wanted to receive. 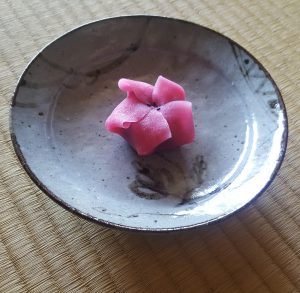 The waitress brought the sweets and tea. These little pieces on an elevated dish of white ceramic seemed like a whole meal. The tea bowl resting on a dark and light wood plate and the tiny copper fork finished to create a picture that I would forever remember. In tea ceremony, we use sweets of roughly the same size, made of almost the same ingredients as these ones. Beyond the quality of the product used, the most important part of the traditional sweets called omogashi or wagashi is the skills with which they are sculpted by the maker to look like flowers, leaves or items that match the season and the occasion.

But these sweets had their mastery in their taste. In fact, never have I seen elsewhere such skill in mixing flavors. Grapefruit and chamomile in summer, blueberry and dried apple in autumn, red bean and Sichuan pepper bell in winter. Though extremely simple and small, I can savor these sweets for hours, just like the rice in tea ceremony meals, perfectly cooked to be smooth like a young heir’s fur. 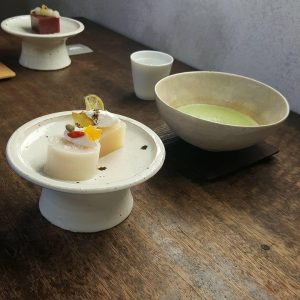 When I go to this tea house with friends, I have noticed how their voice naturally soften and the biggest potato chips devourer cannot help but to eat slowly and sip his tea with care. The environnement changes our way of thinking, our conversation, our behavior. Just like in a tea room, any sensible person straighten their back in this place. In an attitude that is both austere and relaxed, we can enjoy a true moment of peace and quietness, forgetting all about the noisy streets of central Kyoto and the busy frenzy of our mundane and, more often than not, meaningless life.

Meditation is certainly not made for everybody, just like the Way of Tea or this kind of place, but I like to think that, by going there, people can learn to slow down a bit and enjoy a clear mind. Every time I go there, I cannot help but take picture of what I am eating, but then I put away my phone and turn down all notifications. Alone with my notes or a good book, I simply enjoy the place and let my mind wander from words to world, enjoying pleasures of the mind and pleasures of the body equally. The experience is truly close to what I can live in a tea room. And just like the experience of a tea ceremony, it is very fragile. I once asked if I could take out the sweets and they explained to me that these sweets do not survive more than three hours outside a fridge. So they will never get out of Kyoto.

I will not give here the address of this cafe. First and foremost because I believe that there are many places like this one and that it is up to my readers to find them for themselves. By looking, one usually discover one, slightly hidden, even in the busiest districts. The one I mentioned here, whose name I still ignore, is a bit remote, somewhere in the only famous street of Murasakino, south from Daitokuji. It is not looking for visibility among tourists. I have never seen the shop full, even in weekends. If you ever come across it, it will be simply because, as a weary traveler or a wandering inhabitant, you started noticing the little details, like a white curtain with no inscription, and let your mind and hand wander to the door in search for a peaceful rest on your way to some place that, in the end, has no true importance to you. 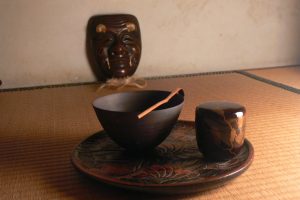