Entering the Way of Tea

Studying tea : the leaf and the brew When I first came back from Japan, I had few experiences with the Japanese tea ceremony (or Way of Tea, Chado). All…
By Tokyo Room Finder • November 8, 2018

Studying tea : the leaf and the brew

When I first came back from Japan, I had few experiences with the Japanese tea ceremony (or Way of Tea, Chado). All I could see from my experience was a dense and scary art consisting, roughly, of serving tea, food and organizing a whole event around it with thousands of etiquettes and rules to learn. People who practiced it were called Masters (Sensei) so it was probably a difficult and incommensurably opaque thing. And it seemed very “ceremonial”.

Coming back from Japan, I wanted to have another trip there but this time to study the farming of tea. And that is when a friend of mine simply said to me: “don’t go study farming, just study the Way of Tea !” And he put me in touch with a tea master named “Soki”, in Paris. 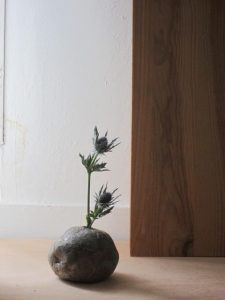 So I went to Soki’s place. In a Maid’s room of his building, he had built his own tea room. He welcomed me in it. Quietly, with a nice smile and an open French attitude that relaxed me. I do not remember much of this first encounter. The light was dim, it was sometime in the evening, shortly after new year in 2016. Soki took the water ladle and calmly poured hot water into a dark and gleaming tea bowl. I had witnessed tea ceremonies before, this one seemed a little different. I could not say why I already felt that way, even today. It was warm and comforting, generous and without a single glimpse of superiority. I was not in a room with a Master but with an old friend, although we had just met.

As the ceremony ended, we started chatting, casually, in the tea room. Soki told me that the tea bowl was an original Raku. In other words a bowl of immense worth. I can still remember it today, On the shiny dark glaze, a string of bubbly white glaze was going through the horizon, like a chain of mountains, or a dragon. Soki said that he could teach me tea. I put the tea bowl down and thanked, then I said that I was not sure to be really interested. At the time, I did not know how to make a promise. I said that I could try a first lesson but was not sure if I would be interested.

The first steps on the Way of Tea

One week later, on the 19th of January, I was receiving my first class. Alone with Soki. Soki-sensei rarely teaches any other way. I must say that, at that time, I was going through a lot of personal troubles, I felt like a piece of cloth torn and washed on the shore of a mad sea.

I thought that the teaching would be hard, that I would get scolded for any mistake I make. And since a tea ceremony is first learned by learning the precise movements of serving tea, it would have been normal that my first lesson would look like a training scene from Full Metal Jacket. But instead, Soki-sensei smoothly let me act, correcting only one or two movement with a slow and kind voice, letting me act on intuition and make proposals. As I poured the hot water in the tea bowl and took it in my hands to heat it a bit, I felt a strange and soothing warmth in my mind. For an instant, all my worries had disappeared.
I finished making the tea and looked at Soki-sensei. He was smiling, saying that my tea was very good. I immediately asked: can I come again?

Soki is a French tea master. He learned from the school Sohen Ryu Shoden An. He learned for more than thirteen years under the previous Grand Master of the school before coming back to Europe where he retired from professional life. Soki never makes his students pay but he chooses them. His tea room is private and he does not look for much visibility among non-practitioners. The like-minded people simply gather around him, often by chance. 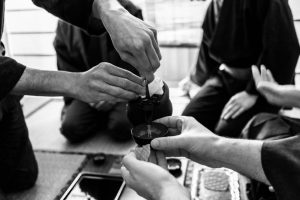 The Japanese tea ceremony is a very difficult thing to describe. It is both your grandma’s tea time, a martial art and a philosophy.
In Japan, it is called “Chado”, the Way of Tea or “Chanoyu”, the “hot water for tea”, one title referring to the more spiritual side, the other one to the simplicity that tea masters long for.
I like to say now that it is a training in aesthetic, discipline and spirituality all together, and the three elements cannot be separated. A tea ceremony is a moment of meditation but also a moment to enjoy a good time together. I like to think that, at its core, it is a very intimate moment. The Way of Tea I have been taught focus on dedicating a moment to harmony between few, selected guests, and a host.

After my first lesson I came back to the tea room. I came back every week, then even twice per week. Sometimes more. Very quickly, Soki-sensei included me not only in personal training but also in tea ceremonies he organized. The tea room became my second home and I changed my room in Paris, so I could make tea where I lived.

In Japan, most teachers ask for a very strong price and propose lessons only once per month. Attending a tea ceremony is also expensive. Only later, I would understand how lucky I was to have met such an amazing teacher.
With Soki-sensei, I learned that the core of tea was not the perfection of the movement or the perfect respect of etiquette — these are required to grasp something else. Above all, the real essence of tea is to serve and receive tea with all your heart, putting all your good will into the event. Though I have heard and formulated many ways to express this thought, it never left me, one way or another.

Coming back to Japan — Living the matcha dream

I came back to Japan to study ceramics because I had learned tea with Soki and wanted to understand the beautiful crafts that surrounded the ceremony. And when I came back, I took enough tools to make tea anywhere and I prepared tea for the Japanese whom I met.
In Japan, a lot of people are scared of tea ceremony, just like I was before. But seeing that I was not scolding them on their behavior and simply wanted to give them a deep and relaxing moment of calmness, most of them became really friendly.

I made tea for my landlord, for a girl in a park and for a woman who kindly hosted me. On January 1st 2017, at 6am, James Erasmus, his wife, his step father and I, we climbed the highest mountains of Tamba with a tea pot, some bowls and even a portable heater. We made tea on top of the mountain, as the sun was rising on a new year.

More often than not, Japanese people would say to my Sensei that, after being invited to his tea, they understand what is truly beautiful in it. I am surprised by how many of them then start to learn tea or ask my Sensei for another ceremony. And, recently, I received the same kind of demand.

Very often, because I learned to straighten my back, sit on my knees, and have a polite behavior, I would get a certain respect from the Japanese people surrounding me. My lessons in tea ceremony are still, to this day, my most useful tools to understand the Japanese culture and act with respect in any situation.
Since I started, I have learned that the Japanese tea ceremony is actually closely related to the practice of Zen temples, but also Japanese christianity, court etiquette and samurai ethic. Different schools insist on different aspects. My school is more on the Samurai side, others are more related to religion, aristocracy or to etiquette education. It is truly an immense world where the slightest variations in practice means a thousand words about the ethos of the school and the mind of the practitioner. Among tea practitioners, each person brew the tea differently and the taste changes, thus saying something about the person who whisked the green tea powder (matcha). In ancient times, some samurai even used to evaluate how much they could trust their peers based on how they prepared tea.

Today, I have my own portable tea set. Everything fits in a small box and a thermos, and I go around Japan, serving people or serving myself in unexpected places. Japanese people are curious, they look at me, some of them get closer and I invite them to sit down, wherever we are. I make the tea, talk a bit with them and they drink. I only use top grade matcha. For some of them, it is the first time that they taste a good quality and they discover that matcha is not bitter nor acre, but actually a very smooth and green drink that refreshes the mind and the body.

There are countless stories of tea I could tell here, and I could also talk about the many different tea ceremonies and lessons I received in Japan, sometimes, simply by sweeping the floor of a temple, but that will be for another article I guess. For now, I hope that this small essay will help you understand tea a little bit more. If you need any advice on tea ceremony or matcha, I will be delighted to help you go out of the touristic venues and, who knows, maybe one day, we will cross path in Japan, and I will serve you tea. 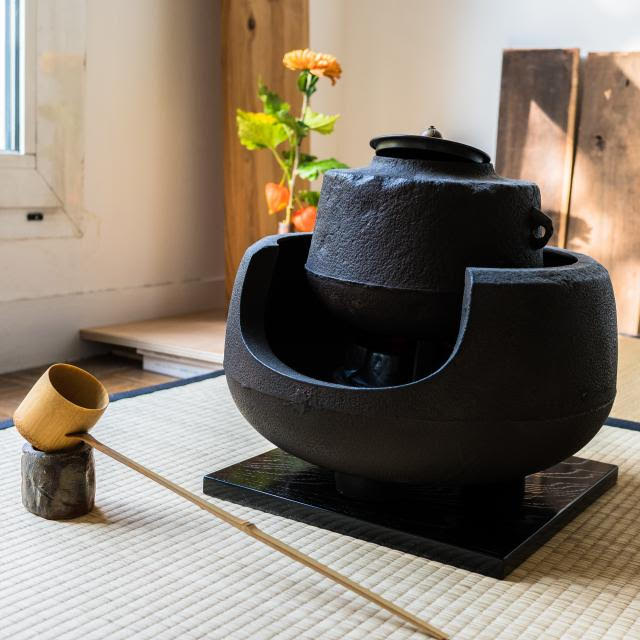