When you visit the famous spots in the Kansai area, it is easy to race through the venue and only concentrate on the main attraction. After all there is just so…
By Tokyo Room Finder • November 29, 2018

When you visit the famous spots in the Kansai area, it is easy to race through the venue and only concentrate on the main attraction. After all there is just so many places to see and so little time. While this is an effective way to see the major sights of the area and get photos with the most famous monuments, you may be doing yourself a disservice if you don’t take your time at most of these venues. Often even the most trafficked attractions have interesting secondary sights that are easily overlooked.

Even in areas that all tourists head to like downtown Namba, there are surprisingly places to see that most people miss. While everyone is distracted with the famous Glico man and other sights in the Dotonburi area, for example, it is easy to be so distracted by the neon that you miss the backstreets nearby. Walking down the shopping arcade just south of the bridge and taking the first left will take you to a traditional hidden area full of old Japanese houses that few tourists visit. 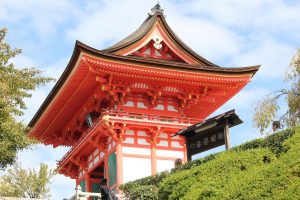 Unfortunately as Nara expands, this area is slowly being lost and its traditional buildings are slowly being replaced with modern ones. Fortunately there are still enough of the original buildings left, especially the eateries that the area was once famous for. For foodies the area is a good place to look for traditional Japanese food, most notably Meoto Zenzai. This sweet bean soup is one of the must-try dishes in the area as it is served with sea vegetables, the sweet taste of the soup being perfectly offset by the salty tang of the seaweed. One of the highlights of this area near Namba is the easily overlooked Hozenji temple. This temple features an ancient Buddhist relic representing a Buddhist sage known as Fudo Myo-o which is covered with layers of moss.

Of course Namba is the only well-trafficked area brimming with hidden sights. The Nara area is also famous for its attractions. Even near its most well-known site, the giant Buddha at Todaiji. The Buddha is such a fascinating sight that it easy to spend hours just contemplating its size and the dedication that went into it. While visitors should definitely spend time appreciating the great artwork, it is easy to be so absorbed by its beauty that you overlook the pillar nearby with the hole in it that many Japanese people flock to. 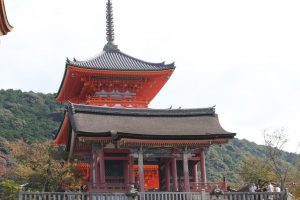 Buddhism has long been associated with living a simple life, understanding that the awards of enlightenment far outweigh the temporary pleasures of this life. According to legend if you have a slim frame that can fit through the relatively small hole, you will be a shoo in for ultimate enlightenment in your next life.

While Nara’s Daibutsu is the most famous, Kyoto also has its own Kannon Buddha known as Ryozen Kannon. This giant statue should itself be on any list of secret attractions as it is one of Kyoto’s lesser-known, under-appreciated sights despite being one of its most fascinating.

While most visitors take a quick photo and leave, it is worthwhile taking your time here. Unknown to most visitors, the Ryozen Kannon is actually hollow and the tourists can actually enter inside the giant statue. Inside are intricately carved statues representing entities associated with the Chinese zodiac. Find the statue that matches your birthday for a special blessing! After visiting the Buddha, the winding streets nearby the statue are worth getting lost in as you head back. Hidden through the area are statues representing the lucky gods of Japan. Finding all of them requires some exploration as the tiny statues are spread out over the area. Luckily the streets are well-worth exploring, full of interesting houses and stores, as well as all the statues. While most people enjoy the sights of Kiyomizu temple and its environs, it is easy to overlook the small door nearby that leads to the Tainai Meguri. This is the so-called ‘womb’ of the building. Intriguingly the Tainai Meguri isn’t so much an attraction full of fascinating sights, it is rather an experience that should be enjoyed slowly.

The room is pitch black and visitors have to navigate it using a thick rope that is attached to the wall. The only noise is other visitors and the occasional humming of the one concession to modernity: the air conditioner. If you are lucky enough to find a completely quiet time, the corridor offers a meditative experience.

The travel ends with an illuminated stone showing a sacred symbol. The way that it emerges from the darkness certainly adds to its appeal as it gives it the feeling of a worshipped object. While power stones and Buddhist iconography offer visitors a spiritual experience, there is the opposite side to Japanese spirituality: the demons, ghosts and monsters that lurk in the dark corners waiting to leap out and pounce. Appropriately for such deceptive monsters, there are lots of lesser-known spots near famous temples associated with them. 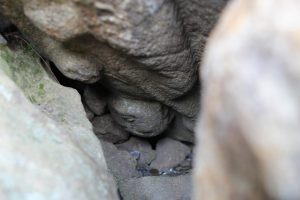 There are multiple legends about the Oni (A form of Japanese demonic ogre) that supposedly used to stalk the Nara area of Japan. Whether you are superstitious or not, this is good news for the visitor as it means that there are plenty of sights related to these mythical beasts to discover in the area.

While Gangoji is rightly known for its Buddhist art and fantastic setting, the area used to be one of the areas that suffered the worst from the Oni infestation. The monks believed that by placing tiny Oni statues around the temple’s grounds would ward off the evil entities. Finding the multiple Oni statues hidden around the gardens is a great way to appreciate more of the great building. While Gangoji has Oni statues to find, it is fascinatingly not the only sight in the area associated with the mythical beasts. At nearby Shinyakushi temple, the beauty of the temple can make it easy to miss the giant bell in its corner. Closer inspection of the bell reveals deep scratches through the thick metal.

While these scratches may seem innocuous, there is a long history to these marks. According to local legends, back in the Asuka period there lived an ogre that used to threaten the area and torment visitors. It was so infamous that its menacing behavior is recorded in the Nihon Ryōiki, a great book of legends and mysteries. 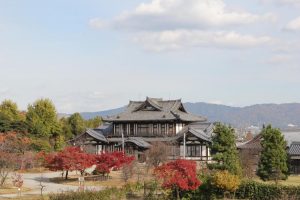 According to the text, a child was born with superman-like abilities and instead of fleeing from the mighty beast, the child stood its ground. The monster massively underestimated his opponent and ended up getting embarrassed as the small, helpless looking child easily defeated it, finally tearing out its hair as the ultimate humiliation. The scratches on the bell were supposedly caused by this epic battle and serve as a reminder of the power of good to win out over evil. Visitors to Shinyakushiji will usually combine a visit with a trip to the nearby Koriyama castle. While there is a lot to see at this castle, it is easy to race to the top to see the ancient temple. In fact, taking your time inspecting its lower wall reveals a secret attraction. 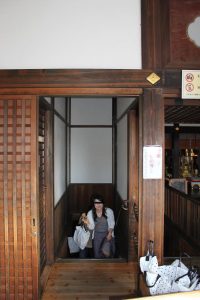 At first the walls can be easily overlooked, however they are worth closer inspection. During the building of the fortifications of the castle, the person overseeing the building Lord Toyotomi Hidenaga (1540-1591) started to run out of materials as the Nara area isn’t rich in natural resources. Instead he started using any material he could find. A lot of the material ended up being taken from temples including unfinished art works. The ultimate example of this was that in the wall of the great monument, there is a small hole that is surrounded by offerings. At first it can be difficult to understand what the attraction is, however craning your neck will let you see a Jizo statue. As this statue is usually associated with the protection of children, the offerings are for the visitor’s family. It is appropriate that Jizo offers protection, as the wall is the only authentic part of the original castle to survive to modern times. One of the best things about spending a lot of time in Japan is that no matter how many times you visit some of its famous attractions, there is often a secret room, lesser known attraction or overlooked location to find. This allows you to personalize your visit and get the most out of the location. So the next time you visit one of these amazing sights, keep your eyes open as you never know what you might find.